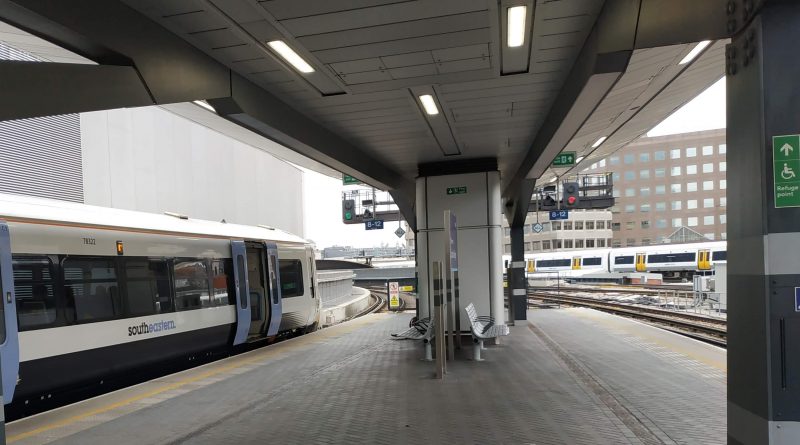 It’s been announced today that Southeastern’s longer distance Class 375 trains are to be refurbished.

However the fleet serving London suburbs is not included, and so the 30 year old trains will continue with some in poor shape internally.

£10 million is to be spent on long distance trains including installation of USB points.

Back on the metro side of the operation and bubbling flooring and dirty interiors with  ground-in dirt are the norm.

The Class 375 trains are owned by Eversholt and leased to Southeastern, as are many of the Class 465 and Class 466 Networkers.

Southeaster Metro users will see newer trains cascaded from South West Rail begin operating on 12th September, though only a couple at first until the full 30 are in service by early 2022.

Some Networkers now on Metro routes were used in the past on longer distance trains (Class 465/9s). They’re far better inside than the main bulk and not just because of first class, but the general colour scheme is far more attractive.

Will the rest ever be refurbished before replacement, whenever that is?

Apart from legally required work for disabled access, very little has ever been done to improve the interior ambience.

With commuting numbers down and rail needing to encourage leisure passengers, interior train quality counts more than ever.

And one other thing, Southeastern make a big thing online about tools that measure how busy trains are. These are based on measuring weight within a carriage. Most networkers lack this facility.

You can see that with the gaps in information on SE tool to find out how busy a train is.

A small number do possess the tech, but it hasn’t been installed on every train.

A lot of this comes down to a complete lack of forward planning for almost a decade now owing to the Department for Transport never deciding what to do.

Award to TfL. Then cancel that. Extend the franchise for a dceade? Nope, give another short 18 month extension.

Someone needs to decide: either the trains will last another 10 years – and in which case invest for that, or replace them.

Bus cuts to 472 from September?