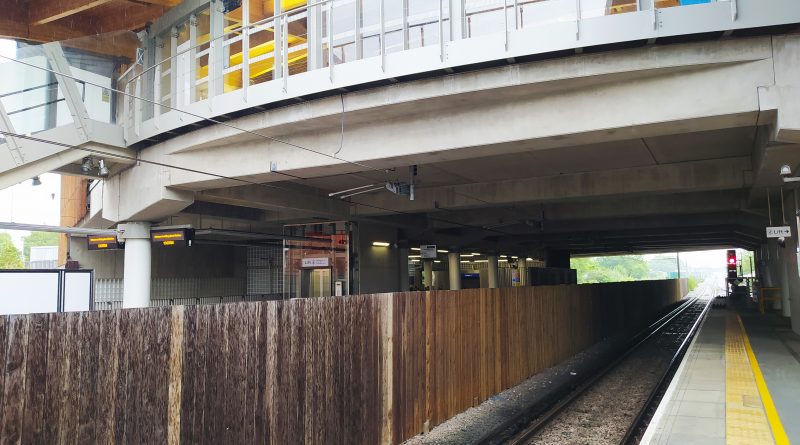 The station opened in advance of Crossrail’s supposed 2018 opening – which is of course never happened.

Abbey Wood is still yet to see a single public Crossrail train, though of course Southeastern and now Thameslink services do stop.

From the existing accessible platform it’s possible to peer over and see what would prevent trains from extending on new track towards Kent.

A single Crossrail track does extend for around half a mile beyond the station, though the other faces buffers with progress beyond blocked by a station entrance leading onto Felixstowe Road.

This entrance will be useful for those living in Abbey Wood including those moving into new flats – some of which are now rising.

To enable through running that entrance would need to be removed.

An adjacent industrial estate site is also in line for 600 homes in future.

Removing the new entrance serving existing and future residents is not a huge challenge, as users could still climb via stairs or lift to the main entrance facing Harrow Manorway – though certainly less convenient.

Another obstacle is a ticket office. I expect TfL would like to get rid of that as soon as possible given what’s happened on the tube – so perhaps not a great obstacle in future.

The station was to originally see both Crossrail tracks run in the middle of two existing lines, with island platforms permitting cross-platform changes from London-bound national rail to Elizabeth Line services.

This was changed on cost grounds – and also as a large Plumstead maintenance facility was decided upon just to the west – and thus it was decided to keep both Crossrail tracks north of National Rail lines allowing easier access for Crossrail trains to their depot.

While rebuilding Abbey Wood may happen in decades to come it’s very difficult to see it in the mid term – let alone in the next decade.

While it was being built Bexley is Bonkers‘ author spoke to engineers who thought it was too much hassle and expense to happen anytime soon.

Though if Abbey Wood seems tricky, they’ll be some extremely difficult work down the line around Slade Green and Dartford. Combine all that, and of the options in the latest consultation, number 3 looks the most likely.

4 thoughts on “Crossrail to Kent: How tough to rebuild new Abbey Wood station?”