Greenwich Council  and TfL are in talks about creating a bus rapid transit link between Thamesmead and Greenwich according to an answer given in a council meeting last night.

If it does move forward it would bring back to life a 20+ year old project that was scrapped by Boris Johnson within days of becoming Mayor of London. I covered the history of the scheme last year.

What is a bus rapid transit you may ask? Well, it’s a bit like a tram on the cheap and previous examples in Bristol and Cambridge have gained controversy for going way over budget. A bus usually runs on a segregated route comprising existing bus lanes and new sections. In places it is self-driving.

This is where cost overruns have often occurred and to be honest, in Bristol and over places it seems a bit of a gimmick. Buses slow down so much to enter the brief automatic sections that time advantage is lost. The upside is less land is needed as buses run within “tracks”. Hopefully any example in Greenwich borough is carefully considered to avoid pitfalls seen elsewhere, as if this project is to take scarce funds any over-engineering and associated high cost will see other priorities lose funding.

It’s no big secret Greenwich Council are keen on the project and talking to TfL about it is nothing particularly new, though the advent of Charlton Riverside masterplan and a large number of developments now in planning give added impetus. Other developments just outside the masterplan area are well on the way to completion such as 330 homes on Victoria Way, which I covered last month.

Hoardings are also now rising around Morris Walk estate in Woolwich. That’s another site near the planned route that will see many new homes in coming years.

I expect this is where Greenwich Council will seek to spend large amounts of section 106 and Community Infrastructure Levy income in coming years. One huge issue will be just how over or under-engineered any project would be.

The previously scrapped scheme started as a tram, then a trolley bus, then downgraded so much it was simply a rebranded 472 bus with no frequency increase (the bus would have been axed) with pointlessly complicated new sections in areas it really wasn’t needed such as along Thamesmead’s usually free flowing dual carriageways. I recall seeing a leaflet which flagged up opening windows as a benefit and it was around then I knew the scheme was grasping for life.

How the gyratory around Plumstead bus garage changes as part of a future Peabody and Berkeley Homes development will be key to how any new scheme runs from Thamesmead to Woolwich.

The recently announced cycle lane between Woolwich and Greenwich could also help or hinder the scheme. In places the proposals seek to reduce general traffic lanes from two to one – which would mean any bus scheme running with general traffic.

After this stretch it would head into the new Charlton Masterplan area.

The early 2000s project also saw the route head along Bugsby’s Way. It probably would do again after exiting the masterplan zone. Greenwich Council have long sought to downgrade Woolwich Road and send more traffic to Bugsby’s Way – which is hardly traffic free as it is. If they do, buses along Bugsby’s Way – possibly including a new bus transit – will then meet that congestion. So a bus lane along the entire road?

There’s many potential changes to streets in the near (ish) future and one hopes that the new cycle lane project is carefully considering futureproofing the route for any bus transit scheme.

Greenwich Council couldn’t fund this alone, and TfL are all but broke, so it’d take changes within central Government policy for much to happen. Despite tens of thousands of homes planned along the route alone, central Government seem to prefer keeping the overall English infrastructure budget at a small level, and instead of increasing spending in the north towards levels in London (which are still insufficient given growth) it appears content to cut levels in London even with mass growth in population.

God forbid a developed nation invests in more than one area. But something will have to give. The numbers of new homes coming are simply too great to do nothing. 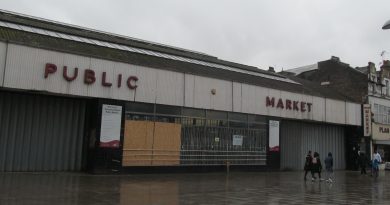