There’s consultation today at the Tramshed in Woolwich until 4pm on plans for a large-scale redevelopment in Woolwich town centre. They’ll be staff on hand to answer questions, or alternatively you can view the information boards online here.

Further details of building heights and massing are shown. One difference from the last consultation is that the attractive buildings on Woolwich New Road now appear be in line for demolition. I believe early plans called for them to go, then they were in line for retention and now demolition again.

These are good buildings behind the cluttered signage and weeds which are growing out the front.

There doesn’t seem to be much rationale behind this – existing buildings are of a good height and mostly attractive except for the newer 1980s block on the corner which juts out. The replacement block in these plans does not appear much taller. Retaining facades whilst altering internal layouts should be possible.

The existing buildings are in poor shape externally with cheap signs stuck on the outside and stained surfaces, but that’s due to owners that don’t maintain and Greenwich Council not enforcing powers they have to ensure buildings are of a good standard. Sound familiar? What’s the point in attracting millions of pounds of investment if routine measures aren’t taken.

Another possible issue is light levels for lower rise blocks from Berkeley Homes above the Crossrail station box. With a new block being built to the north above Building 11, taller towers on each side and then tall blocks over the road residents could be hemmed in.

Apart from these issues much else looks good. It bridges the divide between “new” and “old” Woolwich. Redeveloping the DLR sites is the next crucial issue.

Consultation is underway until 13th May and you can contribute by clicking here. 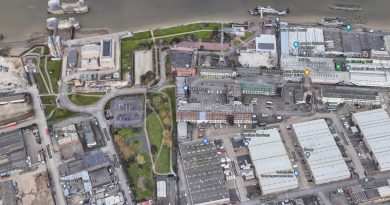 9 thoughts on “Further consultation on 750 homes, shops and cinema at Spray Street in Woolwich”