It gets worse with more poor maintenance of public spaces in Greenwich borough. After a recent post showed Greenwich Council Highway Department’s inept and outdated management of streets a good few examples came in from elsewhere. As well as the Highways Department, which looks after roads, pavement and many grass verges, there’s many problems with the Housing Department who manage external public space in many estates.

One spot I’ve continuously mentioned is the Thornham Street estate off Creek Road in Greenwich. The above view is from Norman Road. It’s one of the starkest examples out there of abject failings within Greenwich Council’s Housing Department. A local resident has sent me some photos.

Surrounded on almost all sides by large-scale new developments which have contributed many millions of pounds to Greenwich Council through Section 106 payments, the estate hasn’t seen a penny for badly maintained public areas. The estate is dangerous and a lawsuit waiting to happen.

A reader contacted me with these photographs taken of the perimeter wall facing Norman Road. A six foot wall with severe cracks. Despite being notified many times Greenwich Council’s Housing Department have not acted.

This shows the scale of the cracks – 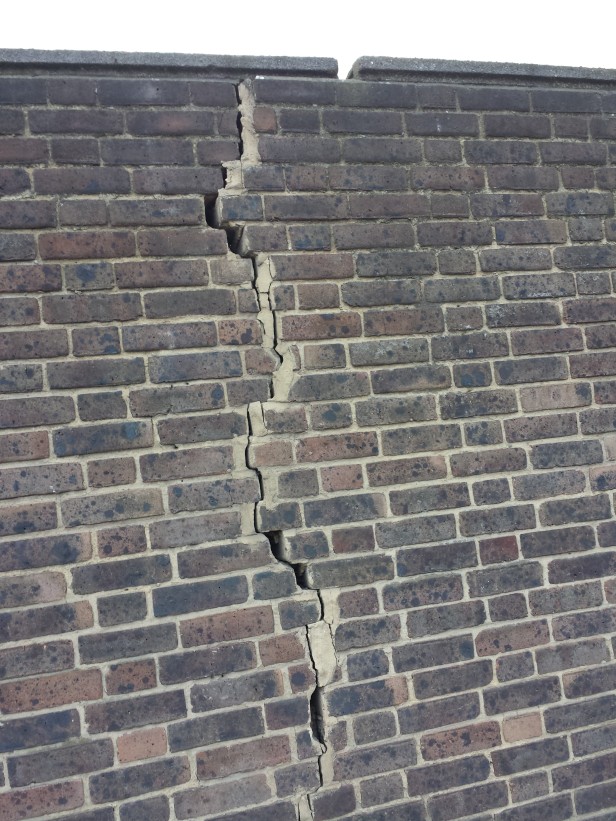 There’s little behind this wall other than car parking spots. Why even retain it?

Customary use of many bollards here of course. Always cash for that. And as usual these wooden types which can barely stay upright for 5 minutes and look awful after a few days rain. Crap signage, scruffy greenery. No idea for aesthetics to match little regard for safety.

And if the wall comes down that’s a hefty compensation bill with all those cars. 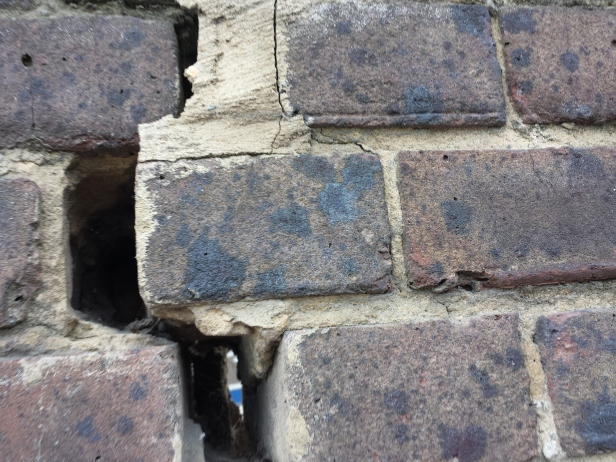 Here are some previous photos of the entrance area to the estate. Just about every wall is broken. Remember this is a Labour council leaving its managed public estates looking like this whilst surrounded by expensive new builds which provided the authority with money which could work wonders here. 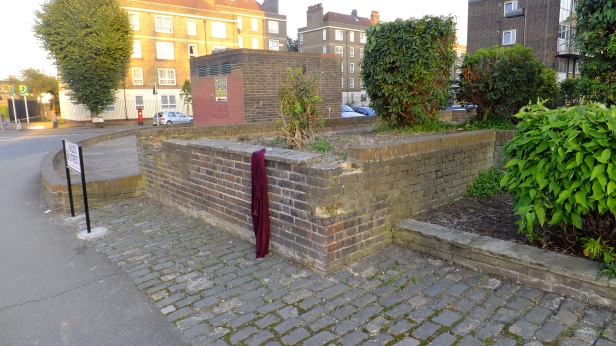 Fast forward a year and the condition of walls had continued to decline:

The photos don’t truly demonstrate how loose many bricks were. This is a chronic failure to maintain assets and ensure safety, let alone ensuring aesthetics and having pride in your environment. This kind of thing is seen all over the borough, but rarely surrounded by such levels of new wealth.

Averil Lekau is the Labour cabinet member with responsibility for housing. The department is overseen by a Scrutiny Panel led by Labour councillor Christine May.

The Housing Department’s remit is not just buildings, homes and flats but areas surrounding blocks and communal space on estates. These are invariably poor, sometimes atrocious and dangerous and these issues are rarely picked up by those who should be holding the department to account.

There was a notice on the Greenwich website about possible work on the street where the estate is located. No details were given. And it follows an audit that Greenwich Council have paid Savills to conduct on areas of the borough. So maybe something will change, but it’s been like this for years and it really should not be taking expensive external audits to ensure routine maintenance is undertaken.

Heading back now to the recent look at street clutter wasting money and hindering pedestrians, here’s what Greenwich Council’s Twitter feed gave as a reason:

This doesn’t stand up to scrutiny of most instances. In this example below (like most), a driver going forward a few metres renders it pointless: 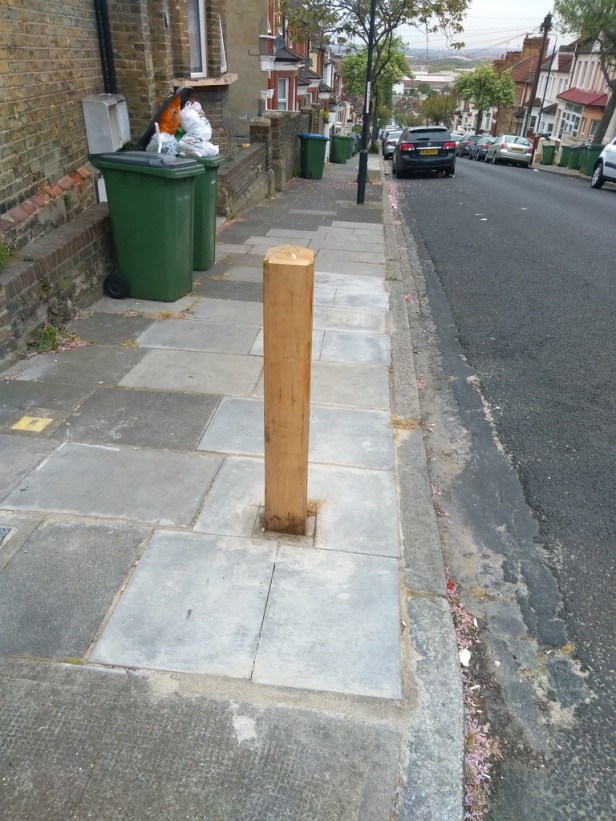 Same here. There’s only one bollard and clearly it failed:

And the only option against poor parking is to make things worse for pedestrians, particularly for those in wheelchairs, parents with pushchairs and the partially sighted? Really?

For one, they lack traffic wardens to prevent poor parking across the borough. This has meant they are £2 million down on budgeted income each and every year for at least five years. £10 million short, in part because they lack staff.

The solution to crap parking is clearly not to spend money on making things worse for pedestrians and turning towns into cluttered eyesores but enforce rules against parking and increase staffing to do so.

Doing so is very likely to substantially increase income and result in fewer obstructions and street clutter.

Does this do a thing? 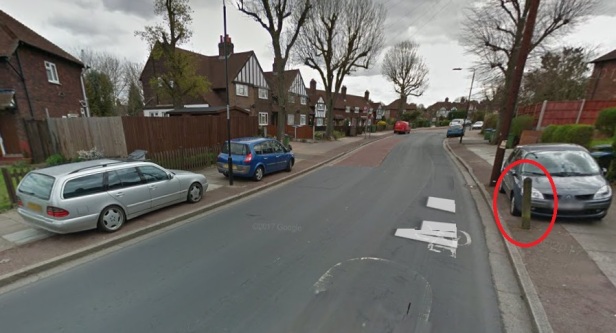 Clearly not. So why put it in?

Anyone walking the streets of Greenwich borough sees this waste first hand, and the reason given doesn’t stack up.

Lots of street clutter here yet they’ve left a big gap to go and drive on the paving rendering the rest of it a waste.

If it’s essential to spend thousands installing street furniture, which it often isn’t if parking rules are enforced, then use one type of bollard throughout without odd gaps. Not these wooden things but a simple, black design that would match other types of street furniture which should be painted the same colour. It’s pretty basic design knowledge.

Or be smarter and use cycle stands to serve an additional purpose, or add trees.

The images are from Middle Park estate in Eltham. There’s the usual drab shopping parade which hasn’t seen a penny in many years to improve a place at the heart of a community. But examples of where Highway’s have gone crazy and appear to place things at random:

Highways, Parking and Housing are not well functioning departments in Greenwich borough. And it’s costing everybody dearly with the ruling Labour party overseeing the mess. It’s baffling as to why they’re doing exactly what the party is supposed to be against – letting the poorest and most vulnerable suffer, with run down estates and poor streets making getting around harder than it need be for groups such as the disabled.

Abbey Wood Labour Party leaped onto the cuts line when asked about issues:

This doesn’t really wash. All these issues long predate cuts for one. Though cuts have certainly been extensive and had a grave impact in areas such as social care. But Greenwich Council receive millions in ring-fenced money that can only be used in the area of streets and public space. Yet they are very quiet on this and prior years income have yielded very little improvement.

Click here to see what other councils are doing with the same money.

There’s also many external funds they can bid for, yet they have a far worse record in securing external funding for street and park improvements than other authorities dating back years. Numerous rounds of funding come and go. Labour and Tory councils get millions. Greenwich is often absent. Poor bids if bidding at all?

There’s also much money coming in from developers – with Greenwich having the second or third largest amount of new homes built of any London borough. £11.4 million came in last year and £50 million the past five. It’s done very little.

And they have that massive parking income shortfall of £10 million going back five years. If they had the parking staff to enforce rules they’d have more income. Cuts are hitting hard elsewhere but creating good public places is one of the least affected areas. The money is there but it’s often wasted or not obtained.

Add on taking many years to establish landlord licensing, which brings in money to investigate environmental issues, as well as issuing very few £400 fines for fly-tipping compared to other London Councils since the power was introduced last April, failing to use powers such as Section 215 to act against building owners and it all adds up to a pattern of failure dragging areas down, and cuts can’t be blamed for all that. Poor departments can, and elected politicians and a Labour council not holding them to account.