Two towers in Woolwich located beside the Thames near the ferry continue to take shape after years of delay.

This is the latest phase of Mast Quay – or Sky Sail as its now apparently called.

The project was stuck in nearly 20 years of development hell hence the decidedly dated look of the final two blocks. We’ve seen faux everything from Georgian to Tudor to Victorian and while this is not exactly faux Millennium, it’s been held up so long that’s how it could appear.

That legacy means the worst of that era is in evidence with very small windows and a tacky, plastic-like appearance. They’ve even managed to cut back further from 2018 renders.

Here’s the smaller of the two towers:

Renders before construction commenced showed balconies on the exterior closer to the river. None exist so far.

It also appears that a solid wall of glazing on the edge of the western façade nearest the Thames has been removed in cut backs. Sorry, “value engineering”. See below, then scroll up and look at the image I took this week:

The name Mast Quay is apparently derived from a glazed façade representing a sail on the main tower. No sign so far, though to be fair the tallest main tower is far from complete and various renders from the developer go out of their way to limit views of the development – particular from Woolwich.

Given cut backs on the other tower, how will the main block end up?

Other earlier render show the finished article across both towers as a dog’s dinner:

Here’s one from over the Thames where the mess facing Woolwich is not evident. 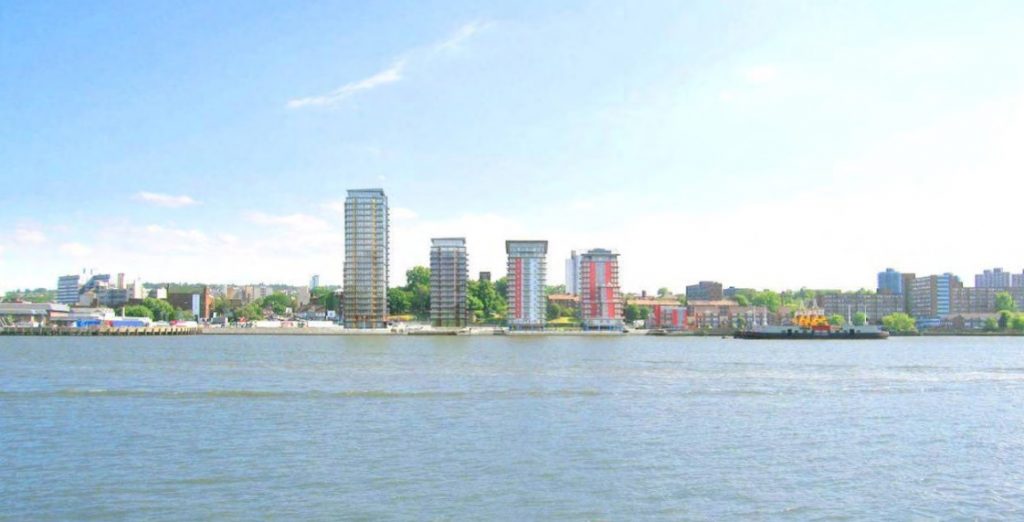 Both blocks will be build to rent aimed at younger people. The advent and proximity of Crossrail is of course a major attraction to investors and future residents.

When it finally finishes the Thames Path should reopen after years of closure.

If the dedicated cycle lane ever reaches this far residents will also have a fully segregated lane to central London. Given the likely demographic of residents (typically younger people not looking for suburban car owning life), that should appeal greatly to many.