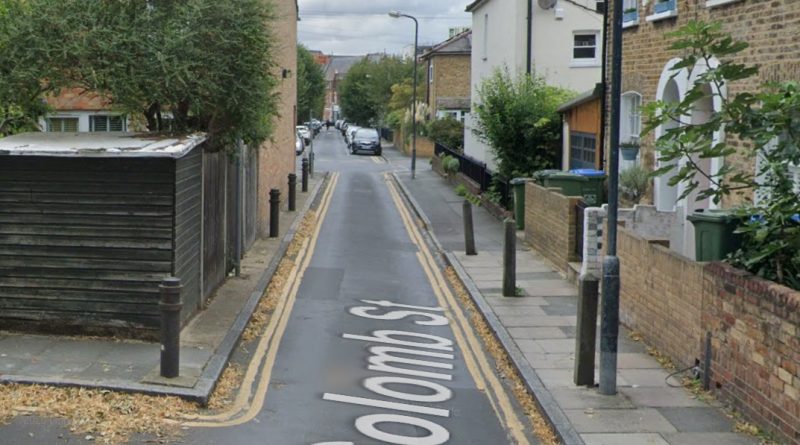 Greenwich Council have responded to residents seeking pedestrian improvements on a Greenwich street by claiming there is no funding.

Pathways on Colomb Road and an adjoining street are blocked by both trees and street furniture. 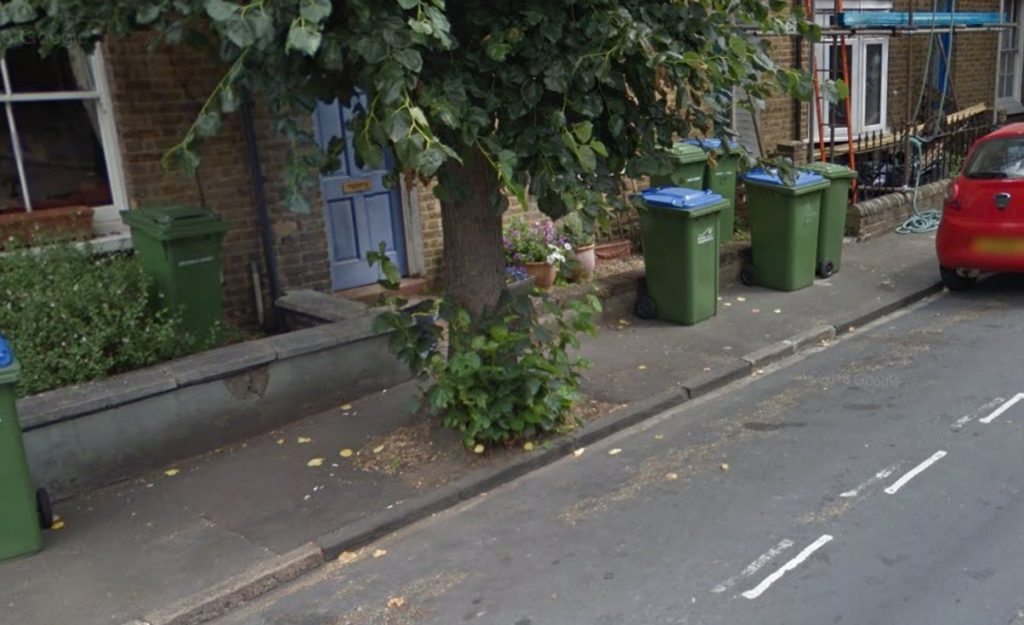 Residents have asked for changes in the area. According to the report once a petition was submitted, Greenwich Council “officers were not aware of any accessibility issues by pedestrians”.

That raises the question that regular street inspections (the report mentions this happens every three months here) are not looking into accessibility, which contradicts many Greenwich Council reports that state improved walking links are a priority.

Now the petition is in, Greenwich officers note “a footway width too narrow to be easily passed by wheelchair and mobility scooter users” on Colomb Street.

There are not calls from residents to remove the tree, but work to allow pedestrians to have space to pass when heading down the street. However we hear the same response from Greenwich Council and a familiar theme; pass the buck to TfL and claim no funds.

Claims of no funding are pretty weak when stepping back and looking at the wider picture. There is funding if Greenwich Council desire it.

All that is brushed aside, as Greenwich Highways state “The footways are narrow on Colomb Street and it is not possible to agree to the footway widening unless a large scale scheme proceeds. This would be a costly and major undertaking requiring a range of investigations, feasibility work and then design. There is no funding availability to undertake this work.”

Compare with Lewisham, who in a similar story saw residents request improvements late last year. Officers stated they will look to use developer income if TfL money is unavailable.

But even if they refuse to allow space around trees, other low cost interventions could occur.

Greenwich officers state: “an alternative to this route would be via Rodmere Street, which is lined by two street lighting column and several timber bollards, the bollards being historically installed to prevent parking on the narrow footways.”

At present, this isn’t much of an alternative:

The obvious solution is remove the clutter, enforce parking regularly using staff on the ground and relocate the street light to permit safe access by wheelchair and mobility scooters.

Officers also state indirect routes exist. Should the disabled,.or parents with buggies, have to go out there way due to poor design?

“Council officers previous met with a resident and noted a route which avoids this tree, via Walnut Tree Road and Vanbrugh Hill. Though it was not a direct route, it was level with accessible dropped kerbs at all junctions.”

“It is estimated that to move this column to the back of the footway would be cost approximately £2,500, presuming that there are no issues with the house footings or services. Should this not be possible, a complete relocation to the other side of the street could cost in the region of £8,000.

These estimates exclude and exploratory trial holes which would be an additional £200-300 per excavation. There is the risk that neither of the relocation sites are possible due to the footings or services.”

It’s revealing they note utter obstructs but do not once advocate removing it.

In fact, they continue to install similar all over the area and borough

Further on in the report Greenwich expand possibilities of major work:

“To carry out an assessment of the footway widths on Colomb Street, including widening would be a medium scale project which would involve parking beat traffic volume and composition, and detailed tree root surveys.

Consultation costs are estimated at £2,000 and officer time would be between 6-12 months. There is a significant risk that there could be objections to the consultation or Traffic Management Orders, which could lead to a judicial review and any proposals not proceeding.”

Officers rule this out.

It’s interesting how they always find money to install clutter but plead poverty when asked to remove or relocate some to assist disabled pedestrians and parents.

We hear the same old story: “Unfortunately there are no available funds to undertake either the study work or any resulting construction work. TfL funding has significantly decreased and is unlikely to be restored to previous levels in the near future.

The Highways Maintenance budget should only be used for maintaining existing infrastructure and so cannot be used for major improvement works.”

That’s funny, as much street clutter is still being installed. How is that being funded but £300 for a study and £8000 for moving a lamp post so prohibitive?

The refusal to use funds comes despite numerous new developments in the ward that have brought tens of millions to council coffers.

Sorry to retread old ground again, but new developments are numerous in the area and have been for years throughout the ward bringing substantial income to the authority. Greenwich have failed time and again to allocate Section 106 income to improving local streets to make it safer for pedestrians.

The other main source of income is the Community Infrastructure Levy. Greenwich were last (or thereabouts) last year and the year before for collecting funds. In fact, they’ve been extremely poor since 2015 at raising funding via this key source and lag many millions behind their estimate in 2015.

To give just one example, see how Islington Council use that income. Note the “People Friendly Streets Program:

I could list dozens of examples at authorities across the capital.

Greenwich lack such funds as a result of setting an extremely favourable levy rate for developers back in 2015 (the report from the Planning Examiner at the time shows they could have gone higher – up to £235 per square metre versus the £70 they chose).

They then failed to revise that rate in 2018 as promised in 2015. Even now, they offer no plan or detail to change the rates towards London norms.

Another area where Greenwich have an extremely poor record is collecting fines for illegal parking and driving. They saw around a £12m shortfall of income compared to budgeted totals in parking alone over the last decade. Income from fines is ringfenced to administration, with any surplus spent on transport projects which includes street remodelling or pedestrian improvements.

Aside from the £12m shortfall, they outsourced parking in many areas of the borough to a private company named Wing Parking who retained all revenue from fines as part of the deal. They were warned to stop doing so by central Government in 2014. Only in 2022 are they changing, and even then the Cabinet Member for Transport intervened to prevent enforcement in some areas.

In 2020 they were lagging in another area through raising income via CCTV enforcement against traffic offences and parking in bus lanes, which has been open to councils since 2005 in London. By 2020 all London boroughs except three had joined. Guess who was one of the three.

Belatedly that changed in 2021, yet implementation has been somewhat odd to say the least.l with some sites seeing a single fine issued in an entire month. Much like parking fines, income from this source is ringfenced to administration and then transport.

However money is now coming in from some cameras, yet where is it going if they plead poverty over modest changes to improve access for pedestrians?

This refusal to improve streets for pedestrians also goes against their own latest carbon reduction plan adopted at the end of 2021, which followed two other reports since 2017 which made no impact on behaviour at Highways who continue to block paving with clutter.

The last funding source is New Homes Bonus which sees £3.5m this year from new housing. This is non-ringfenced and so more likely to be used for other pressing issues, as opposed to income which cannot be used for ,say, social care.

It should not therefore be needed with ample opportunity for funding to improve streets for all.

It does show however that new homes do bring in money from a variety of funding sources – and yet so often existing streets and towns see very little from it.

Officers recommend that councillors approve an option to do the bare minimum, though claim no funding so little likely to happen anytime soon. 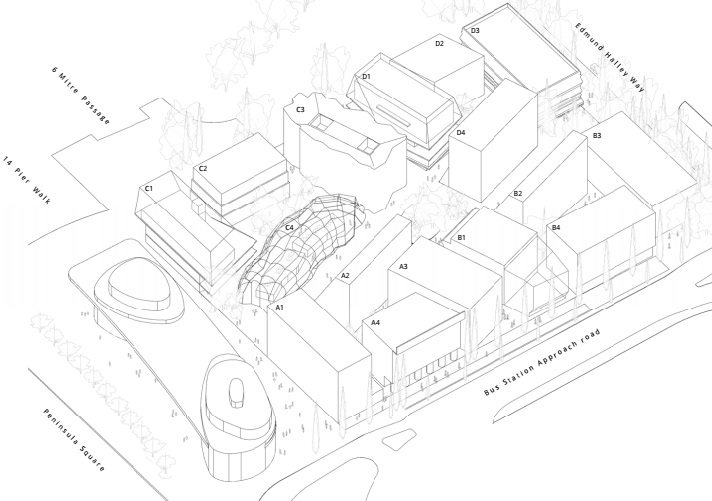 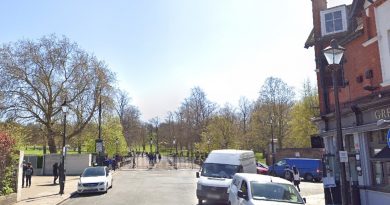