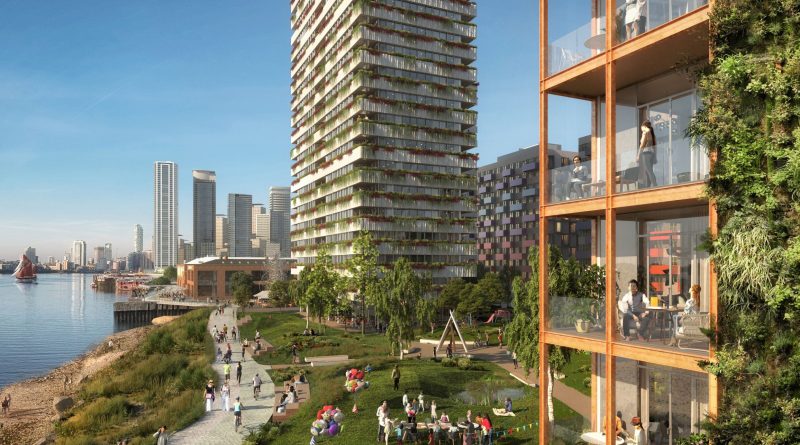 Greenwich Council planners are recommending approval of 1,500 homes at Morden Wharf from developer U&I when it goes before the council’s Planning Board in September.

This site covered the plans extensively when submitted back in July 2020. Click here to take a look.

In what a cynic might see as a sweetener for approval, the Gloriana Boathouse (the Queen’s row barge moored at St Katherine’s Docks) is proposed to be located on the river:

A contentious element is “flipping” the safeguarded wharf, with housing planned on what was a protected wharf, which is now moved to the north permitting this development.

The Secretary of State for Housing, Communities & Local Government approved the change in February 2021.

Developer U&I have so far owned the land for 12 years without building.

The site has a very poor level of public transport accessibility.

Bus route 108 is expected to divert into the site if plans approved – though that is far from enough for 1,500 homes.

The reports states “a bus service within the site and a financial contribution towards its implementation of £2.5m”.

A new river boat service is planned, and Thames Clippers would see up to £225,000 per year.

Parking space provision is for “45 [spaces] would be provided at the outset, and up to 150 spaces provided at completion, to be provided within the basement level.

Improving this will be absolutely key to making the development work.

They note that “the nearest station (North Greenwich) approximately one-mile walking distance away”.

So there’s recognition work is badly needed, yet a figure of £250,000 is given for public realm upgrades, which may prove to be far from enough.

GLLaB sees over £1.5 million, and then £10 per square metre for business and town centre developments. Whether they will include this in that total remains to be seen.

They also state there will be “on-site improvements to permeability” which is a given as a developer is hardly not going to improve public space in the development.

That’s not what needs to be worried about, but rather off-site linking to amenities.

It’s hard to have anything but minimal faith in the authority making any effort to improve links to North Greenwich tube and attractions like the o2, which will naturally be of major appeal to residents.

£250,000 for cycling and pedestrian improvements is pretty low given the sum for river boat services at £225,000 per year. That also needs to cover the Thames Path.

What is likely is that the authority expect Silvertown Tunnel work on a new footbridge (which itself doesn’t exactly look enticing) to be sufficient, and then do little either side.

A glimpse of this is seen in the segment “Sea Witch Lane would be improved with a new and improved tree lined street linking Tunnel Avenue with the riverfront, to include integrated benches and cycle parking, and has been designed to provide a pedestrian/cycle friendly environment adjacent to Morden Park Square.”.

Great, but they need to radically upgrade the stretch from Tunnel Avenue site entrance to the footbridge over the Blackwall and Silverton Tunnel entrances and then along Boord Street towards North Greenwich.

They do reference Travelodge’s plan for a hotel en route that was recently approved, yet work planned there was pretty modest. Again, GLLaB swallowed most money with £147,411 compared to just £50,000 on measures to encourage sustainable travel.

Boord Street doesn’t even have paving on one side of the road.

And neither do some roads to the north of here.

A new health centre is proposed, with “up to 1,400m2 of healthcare provision on-site, to be offered for use by the CCG as a centralised Healthcare Hub for the wider area”

The plan also includes provision of a nursery and a £4.8m contribution toward a new primary school.

“Affordable” housing is set at 31 per cent, with a 70/30 split between “affordable rent” and 30 per cent intermediate “affordable”.

The planners report states “this would be proportionally higher than a number of nearby consented schemes (including the Knight Dragon Masterplan and Greenwich Millennium Village)”.

The site is deemed suitable for tall buildings given the “allocated status of the site in the draft Site Allocations document and the site’s location within an Opportunity Area and a Strategic Development Location, it is considered that the scale and density of the proposal, subject to the mitigation outlined in this report, can be supported in line with London Plan polices which encourage greater densities in strategically designated areas, and in support of this, it is recognised that the site is considered suitable for tall buildings.”

Since then Woolwich & Greenwich MP Matt Pennycook has written to oppose the plans.

His opposition divided opinion as he objected to but towers in an area that is mostly industrial land.

One line in particular gained attention, which was that “it would have a detrimental impact on the existing character of the area and local heritage assets”.

He objected to height, though outline approval has already been given to towers directly next door, with outline plans also approving towers to the north and other areas of the Peninsula.

If these plans were reduced in height to those next door, a wall effect would be visible from the river rather than gradually rising heights to a centrepiece as planned.

In the letter he stated there would be an “abrupt” rise in height if Morden Wharf is built, though the outline approval for towers at Enderby Place would fill the gap in approved outline plans or revised future plans.

In terms of design, the taller blocks appear to have more effort placed into them than the somewhat plain and dull smaller blocks.

Given the complete state of this area, I’m not sure it could be much worse. They do note “highways paraphernalia” already exists.

They also mention the impact on views from Greenwich Park, but hasn’t that ship long sailed? For me, what makes the view so good – and the best in London – is that 1,000 years of London’s history is laid out in front covering every stage of London’s history up to the present.

They then state: “Generally: the close grouping of the buildings prevents them being viewed as isolated point blocks.

As such, they are, in almost every view, seen as a tall barrier block”.

Tall buildings almost almost work best as cluster gradually rising in height instead of low rise structures then a tower plonked in the middle.

Reducing heights to the same level as neighbouring plots would create a barrier appearance, and so instead the current design with a collection of towers with it’s future neighbour creates a tapering effect instead of a wall consisting of various buildings of similar height.

There’s a also a failure to acknowledge that London’s population has risen by over 1 million over the past decade and Greenwich borough’s annual housing targets are being routinely missed.

It appears the landowner behind this plan also owns land to the north and east:

The council report is somewhat outdated as it states there is a neighbouring “distribution facility (operated by Spicers)”, however Spicers went bankrupt over a year ago.

Whether that land will see forthcoming housing plans remains to be seen.

The Community Infrastructure Levy (CIL) total for this site could hit an additional £5 million, and then there’s New Homes Bonus income if the scheme is still in operation.

As for CIL and Greenwich’s apparent failure to collect it from developers (they are currently last among of all London boroughs), I’m working on a post about that coming soon.