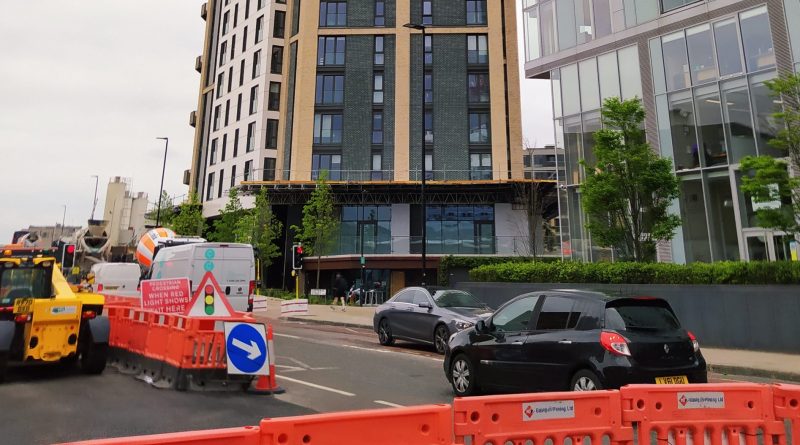 Plans to convert commercial space at a block of flats on Creek Road in Deptford into a 123-room windowless hotel could be approved next week when it comes before Greenwich Council’s Planning Board.

I covered plans when they were submitted in April 2020 which can be seen here.

Space for shops at the development never saw much in the way of occupation over the past decade due – in part – to some pretty basic fundamental design flaws.

Instead of placing commercial space at street level, they are placed higher up dividing paving space in half and presenting a long, blank façade:

This is design 101 stuff. Passing footfall is limited if you make access harder. It also hampers those with mobility problems who have to climb stairs.

Watching people along the street and pretty much all passing foot traffic walks on the pavement and thus window shopping simply doesn’t have any chance to occur.

The split pavement also limits outside seating space for a café or restaurant.

While paving isn’t that narrow, it does limit outside seating potential compared to one flat wide path.

I’m not 100 per cent sure, but it looks like it could possibly be as a result of car parking below the block and penny pinching. If so, instead of placing parking fully as basement level they’ve only included a shallow parking area hence commercial space access a metre above pavement level.

If true, it was condemning unit to failure from day one unless rents were extremely cheap.

This isn’t the only space where developers not ensuring true basement parking presents a blank frontage. Woolwich’s new riverside tower blocks from Berkeley Homes does the same. You may think that a riverside area would be ideal for a café. Unfortunately car parking ensures that isn’t happening.

At the Deptford block, TfL requested that general parking bays be converted to disabled use only. Greenwich council have rejected that suggestion.

TfL stated £75,000 from Section 106 payments was suitable as a contribution to Cycleway 4 works outside, which Greenwich have agreed to.

The Greenwich Society raised concerns over windowless rooms, to which Greenwich planners state: “The proposed hotel model, and access to natural light for guests are not material
considerations which form part of the assessment”.

5 thoughts on “Deptford to see windowless hotel if plans approved: How to ensure commercial space dies”