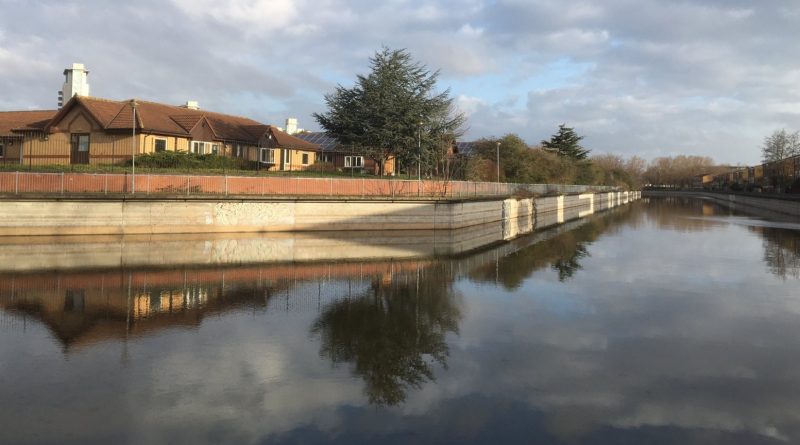 Plans to fill in a historic canal in Thamesmead that once served the Royal Arsenal still appear to be the aim of Housing Association Peabody and are include din a key Greenwich Council strategy document.

Peabody own a large amount of land beside much of the canal – or Broadwater Dock as it’s sometimes called. Back in 2016 a Greenwich Council report first stated plans to infill the dock (eg the canal) as this screenshot shows:

Peabody being Peabody have done little for five years – but the latest Site Allocations Strategy from Greenwich Council unveiled last month (see page 111) still includes plans to fill it in:

Peabody’s ownership boundary can be seen below: 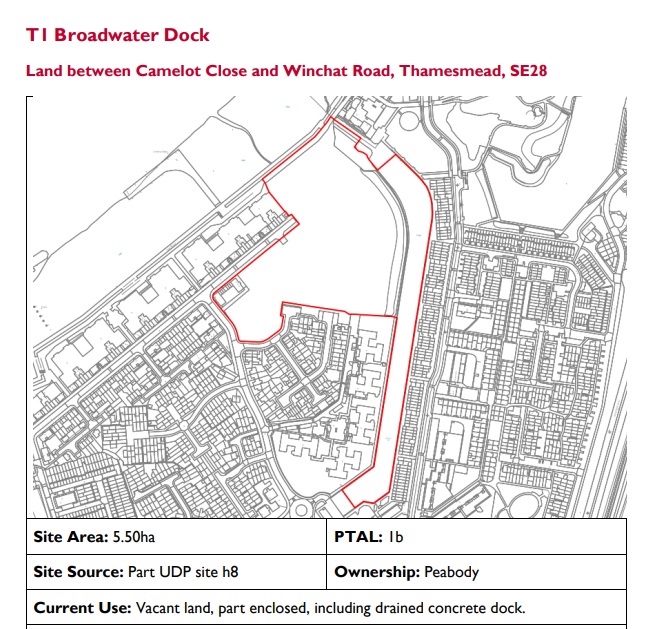 The final 2021 draft was again outdated as it stated: “Development on this site must preserve or enhance the heritage significance of the adjacent Grade II Listed Broadwater Lock and Swing Bridge, currently identified on the Historic England ‘at risk’ register.” The lock and bridge have already been renovated, but that still leaves the rest of the canal – at about 3/4 of a mile in length – at risk of permanent removal through infill.

Peabody themselves appear to still want to fill it in, and tweeted earlier this year in response to a question about the future of the canal:

Note they didn’t care moment on the canal. It’s also disappointing for Peabody to state that yet another site under their control will not be progressing for “some time”. Again, the danger of handing so much land to one company is evident as a slow build-out rates continues. Break up large plots to various groups. A monopoly is not helping to build much needed homes.

The idea of a green link sounds good in theory until looking at a map. Does it make much sense? For those in new homes heading to Crossrail or Woolwich town centre there are already quiet routes among existing homes. For those heading to Plumstead it’d dump you at the gyratory near Plumstead bus garage, and planning approval late in 2020 for the West Thamesmead gateway development of 1,750 homes almost entirely abandoned earlier plans to remove much of the gyratory and improve links to Plumstead station.

So a green link to nowhere as a sop for removing what should be a major asset to the area for many years to come?

A Thames TV video clip from 1981 shows the first homes being built beside the canal. The video starts with a view of the canal then pans away before returning. At 9 mins 24 seconds it returns with a good panoramic shot of the dock/canal.

The canal was built between 1812-14 before a further extension followed shortly afterwards in 1816. It was truncated in the 1930s as the site shrank over the decades, with usage believed to have ended in the 1960s. With the closure of this part of the Arsenal, housing was built along the eastern edge. Much of the western side has lay overgrown, empty, fenced off to the public and now forms part of the Thamesmead Housing Zone in the control of Peabody.

There are numerous examples of canals lost and infilled cross London which are now regretted by many. We see it in Deptford and Rotherhithe, where developers have even gone so far as to propose green waterways to replicate former canals – yet in Thamesmead it appears they want to fill them in as so many were in the 1960s. Are Peabody about to repeat the same mistakes back then and remove what is – and could continue to be – a major local asset?

Thanks to Runner500 for the photos which highlight the characteristics of the canal when water is at high level. You can read their excellent site here.