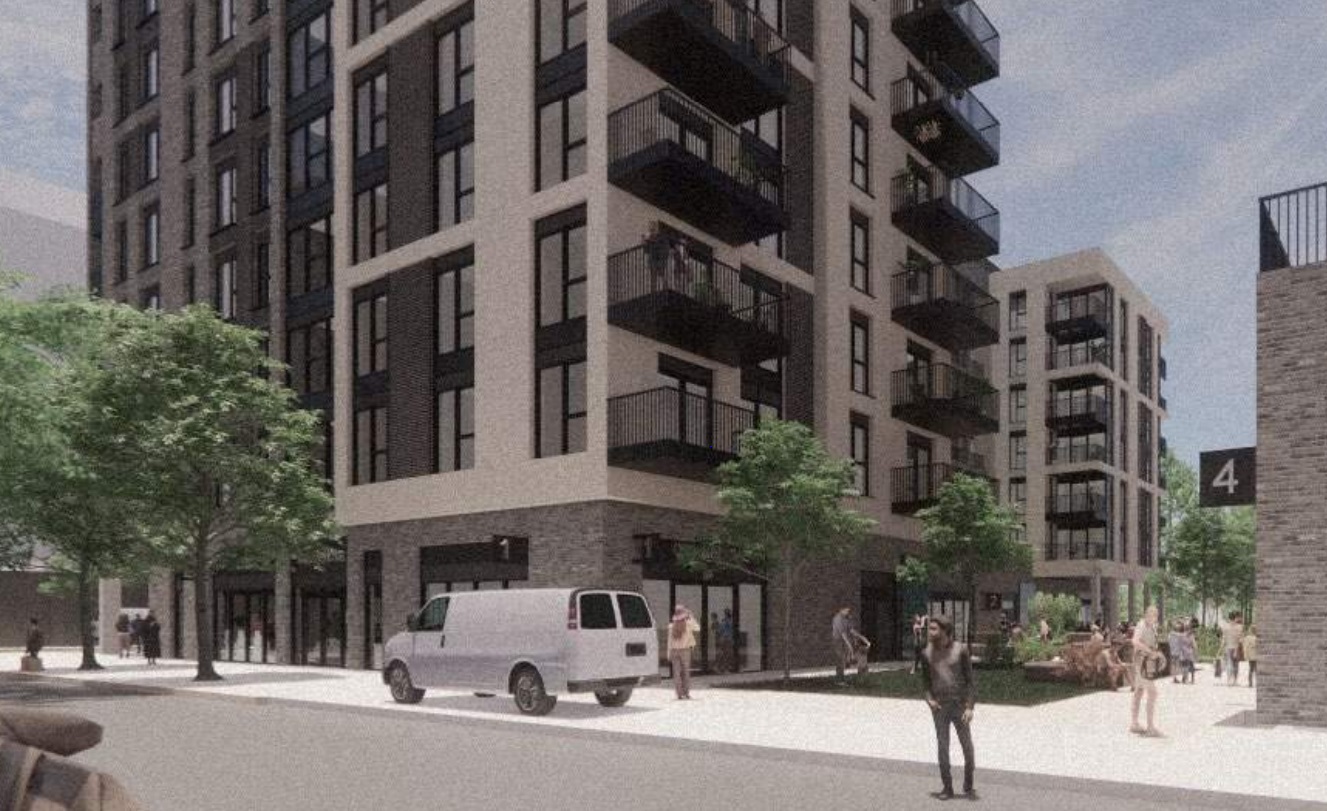 Charlton could see 202 new homes on a site near the Thames Barrier if plans submitted to Greenwich Council are approved. This is down from 250 homes planned during consultation in April.

Aitch group are developers behind the project on a plot located between Eastmoor Street and Westmoor Street. The site tops out at 10 floors and located in the Charlton Riverside masterplan area.

At a meeting earlier this year the application states: “Officers noted that the proposal exceeded the heights indicated in the Masterplan SPD and suggested
that the proposal was too tall but did not indicate what height they considered acceptable”.  No revision to maximum height has been made.

Six businesses were located on site. Two have now left. Car breakers and scrap yards comprise most of what remains.

A jagged roofline tops a new block facing Moore Park. Images in the planning application are often dire quality I should add. Commercial units are at street level.

The number of “affordable” homes is 35%. This is 70% London Affordable Rent and 30% Shared Ownership units. There is no social housing. The Greater London Authority will seek 50% “affordable” as the site is former industrial land.

In terms of design a curved corner facing the park has been ditched on the advice of Greenwich Council’s design panel. This is to smooth the curve of a street. More on that in a bit.

Commercial space is planned facing Moore Park which leads up to the Thames Barrier.

Charlton Riverside’s 2017 masterplan shows a grid of streets that an initial development by Rockwell already sought to compromise. It was rejected but not due to that issue. It’s not great for future bus (or even tram) routes which are planned to accommodate 8,000 homes and 20,000+ residents.

Picture similar developments at various plots across the wider site (above and beyond the two already) with buses having to make continual turns.

A central spine is supposed to host a flagship public transport route based upon the 2009-scrapped Greenwich Waterfront Transit. 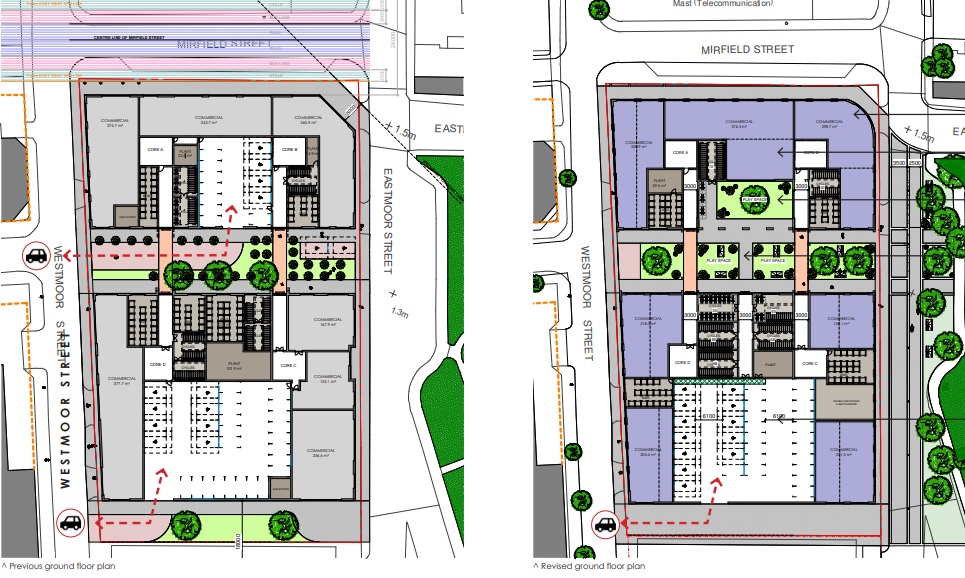 This new plan sees the street having to jut to the north when it meets this plot. This necessitates a curve on the route. Not the end of the world but again shows a willingness to eat into planned street lines. This also impacts upon east-west views through the site when complete.

If approved it will be crucial that subsequent development maintain a straight route heading west towards Greenwich Peninsula. Failing to do so will further impact on public transport speed.

When Rockwell applied and ignored 2017 masterplan street layouts there was very little comment.

“On 17th June 2020, the project team had a virtually meeting with the Leader of the Council, the Chair of the Planning Committee, the Cabinet Member for Regeneration & Housing, Regeneration Officers, and high level
RBG Officers.

The scheme was presented including a summary of the pre-application advice and consultation responses received and how the proposals had evolved. The Leader then asked other attendees to comment and ask questions which the Applicant team addressed. The Leader of the Council noted that the proposals offered clear benefits.

The presentation included slides presenting the east – west route proposals to the north of the site and the Applicant team summarised meetings and advice to date. No objection was raised to the route presented and no questions were asked of the Applicant team.”

Greenwich will also need to step up parking enforcement substantially. The area is in transition from industrial backstreets to 8,000 homes. Walking around the area is currently a challenge with pavement parking commonly seen.

The period of 2010 to 2019 saw no increase in parking wardens across the borough despite a vast increase in new homes. The authority hired more staff last year but chronic problems still persist in many areas. More new homes will stretch staff further.

A “car-free development” means little if surrounding areas are not monitored and a future public transport route through the site is cumbersome and slow.

Optivo Housing Association own land directly to the south and are drawing up plans for 67 homes. Both plots were initially designed by Greenwich-based architects bptw with an 18 metre pedestrian route between plots though Alan Camp architects took over the Aitch plot in January 2020. 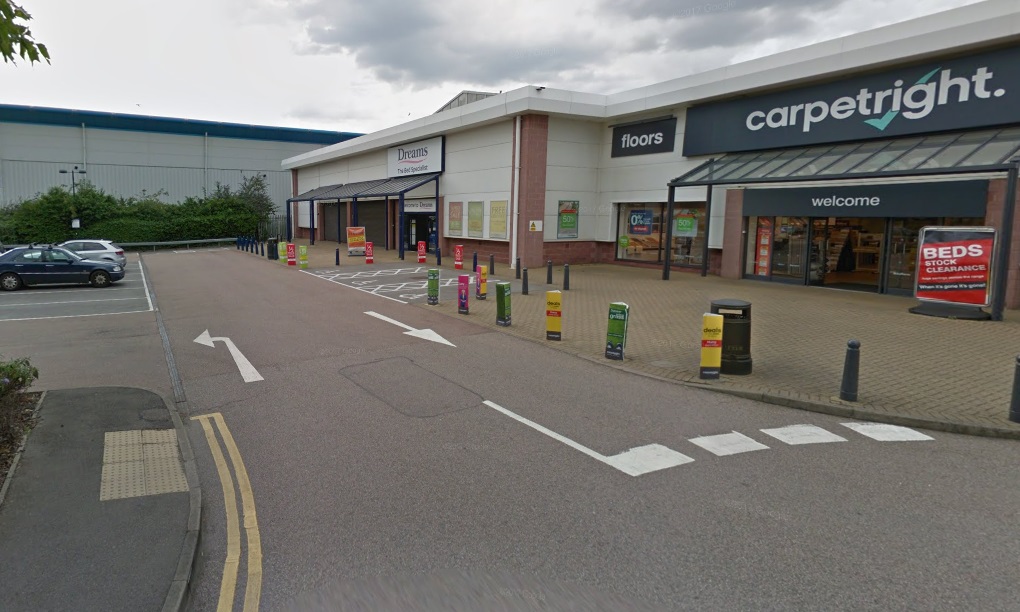