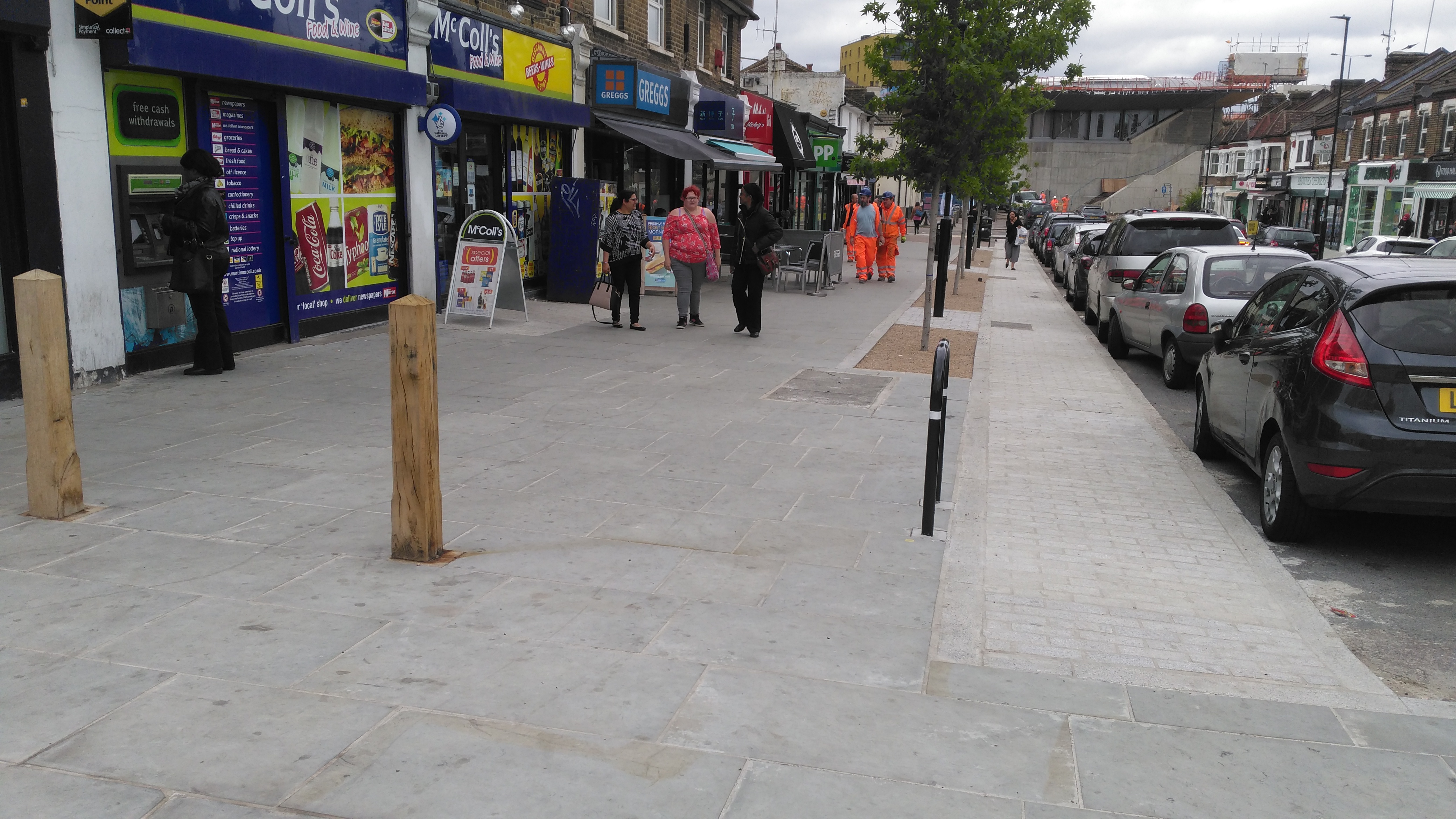 Work has mostly completed on the £400,000 street upgrade scheme on Wilton Road by Abbey Wood station. It was jointly funded by Greenwich and Bexley boroughs. Firstly, they deserve credit for doing this work.

Improving streets and good quality public space is much needed across Greenwich borough – to improve the sense of community, increase numbers willing to walk and cycle, improve custom for business and create places people can take pride in.

And it does look better. The paving is high quality – though using cream rather than a very light stone would better disguise stains and marks. There’s now a row of trees which is a great improvement. The grotty old BT phone box has gone. Cycle racks are added. A very good thing as more will cycle to use Crossrail from next year.

However again we see small touches that bring down the overall scheme, often added at the last moment. Little eye for detail is evident. It’s like splashing out on a top draw suit for your wedding day and then sticking on a pair of Hi-Tecs at the last minute.

It’s a jumble of street clutter with various materials at one end of the street.

Design guidance is to use the same colour and material as other street furniture i.e. black to match the new lampposts and signs (which should also be painted). Here there’s black, black and white, unpainted and then wooden bollards.

This sign is not the best. Tarmac at the base instead of stone paving?

Greenwich Highways have installed some of the ubiquitous wooden bollards. Black metal (or plastic) would work better. They look ok now but stain pretty quickly.

The bollards also aren’t positioned in the best spot as there’s space on one side for cars to park on the pavement and a gap the other side.

Greenwich Council have spent £122,540 on these wooden types since April 2014 according to a Freedom of Information request. They appear to be in the top 10% most expensive types available despite their short life spans and quick discoloration. Fine for parks perhaps. Not as much for streets with cars about, and they’re often placed in random locations serving no purpose. Here’s a screengrab showing the costs:

It’s not a surprise how much is spent when they stick so many up:

This by Plumstead station. It does nothing a cm or two from existing signs.

There’s of course a role for stopping cars going onto paving but they often use the wrong type in a haphazard way wasting money as they go. One place they will be needed is the other side of the tracks at Felixstowe Road when upgrade work completes yet none appear in renders:

But please, not the wooden type. A smart set of black ones lining the road would do the job. A large amount of cycle racks would also be welcome.

Back over the tracks, and those wooden bollards will age, crack and weather quickly and are poor at withstanding knocks. I think it’s telling that almost no other authority in London uses them in the way Greenwich have, and certainly not on the scale they do.

Despite the upgrade it appears that Greenwich Council still don’t enforce parking issues in the area. There’s cars that park on the road all-day, every-day despite a time limit. Cars park on dropped kerbs and Keep Clear markings. Last week on Twitter photos were sent in of people parked near emergency access gates. I’ve seen it many times myself. Greenwich Council said they would look into it. The following day the same car was in the same spot.

Sticking up street furniture, often at random, using poor materials and at high cost is no substitute for staffing and enforcement. Greenwich Council’s Cabinet meeting next week will once again show a substantial gap in the parking budget – £1.4 million below budget expectations in the most recent data.

Sure, street furniture isn’t the biggest thing in the world but when spending such large sums get it right. All the guidance is out there for the relevant departments and it isn’t rocket science. Don’t clutter up streets and obstruct pedestrians whilst leaving big gaps rendering schemes pointless. Don’t use them as a substitute for enforcing parking issues. Don’t use materials that age quickly and aren’t in keeping.

There’s another big scheme underway near here – Harrow Manorway’s £10 million upgrade. We have to hope it ends up well as consultation has been lacking and visualisations of the scheme minimal, giving no real impression of how it will look. And has there been any consultation into the £3.5 million from TfL yet? Not a thing.

It’s often getting the little things wrong that collectively bring down many public spaces in Greenwich Borough. Though you’d never see such things in Greenwich Town Centre showing they must have half a clue, so what is it that’s stopping them elsewhere?

Much like Plumstead’s recent £1.2 million upgrade, a good scheme is undermined by poor last minute additions of street furniture and a lack of enforcement. There’s much to welcome but still much to learn.

Once again, Bexley is Bonkers has a great collection of the scheme documenting changes from beginning to end.