Developer Rockwell’s plan for a large development on industrial land in Charlton has been submitted for planning approval. Thanks to Darryl from 853 and Charlton Champion for the heads up as it’d passed me by.

The height will no doubt prove controversial – the tallest tower is 28-stories high. This is the first stage of plans for 5,000+ at Charlton Riverside.

Greenwich Council are hosting a local meeting on Wednesday 1st February at 7.30pm at the Old Library in Charlton House. This particular development isn’t on the agenda but the wider masterplan will be.

It’ll be difficult for the meeting to cover the wider masterplan without touching upon this development, as it alters elements of it. Consultation on a revised masterplan is running a year late.

This model is included in the planning application and could offer insight into plans for the rest of the site. Other towers are located by the river.

One change that immediately sprung out in this plan compared to 2012 is altering the planned main route running east-west though the masterplan area. Under 2012 plans it was to meet the roundabout at Anchor and Hope Lane and Bugsby’s Way, and in future be a main public transport route avoiding roads to the south. The 2012 plan is below:

It’s shifted to the north. This could be no problem, though perhaps a bit more inefficient for any public transport link. It would however make future plans for a tram more difficult. The 2012 plan did though have a sharp bend along the route. Here’s the newer plan:

There have been longstanding plans for a Greenwich Waterfront Transit transport link from Abbey Wood to North Greenwich via Thamesmead, Woolwich and Charlton. Plans from around the millennium were eventually ditched by Boris Johnson in 2008 after ideas for a tram were whittled away to a very expensive and glorified bus route. The eventual scheme was flawed, but the idea has much merit.

The transit scheme would’ve avoided some existing crowded roads and junctions in Woolwich by heading through bus or tram only routes through the Royal Arsenal site from Thamesmead. At Charlton a resurrected scheme would surely go through the masterplan site and 5,000 homes en route to the Peninsula.

The site is also very close to Charlton station on the Southeastern line but to access the Underground enhanced links to North Greenwich is needed. Given existing crowding on buses and numerous local developments that will increase numbers, a new link will be needed.

A Thames Clipper river pier is planned in the long term for the area.

It’ll be interesting to see what the revised masterplan offers. The original plan from 2012 was deeply flawed and allowed the extension of inefficient big-box retail barns without housing.

It is now being revised, but is running a year late and will become available for consultation after many more retail barns with no residential  component have been built or approved on remaining land.

Comments on the plans can be made until the 1st February. Click here to search and comment. The planning application refernece number is 16/4008/F

Update: Having looked through a few more renders of the development I found this:

The render as usual shows bright sun and a blue sky. In reality this building, which they describe as using dark grey cladding, could appear bleak and overbearing given the choice of greys across the entire facade. Like 30 year stained concrete from day one. 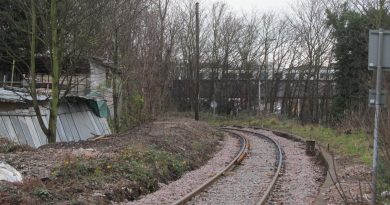 2 thoughts on “Towers at Charlton Riverside, 1000 homes and a river boat pier planned”