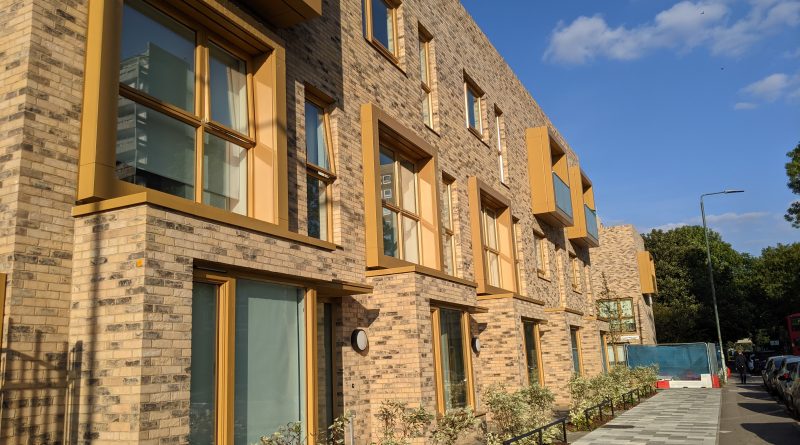 The Thamesmead of legend seen in many films and TV shows (and more than a few adverts and music videos seeking gritty, urban settings) is increasingly no more as much of the old estate is flattened.

And now, after years of delay, Thamesmead has a new civic heart as the former Tavy Bridge become Cygnet Square.

Alongside the new square is a new library and homes beside Southmere Lake.

And all rather pleasant it is too. Peabody commissioned a masterplan by architects Proctor & Matthews and Mecanoo with Durkan taking on a build and design contract.

The square faces Southmere lake as Tavy Bridge previously did:

The site is a mix of 2000s Gallions housing alongside a couple of retained 1960s-70s blocks:

There’s many design nods on new towers towards the old Thamesmead. Look at those balconies: 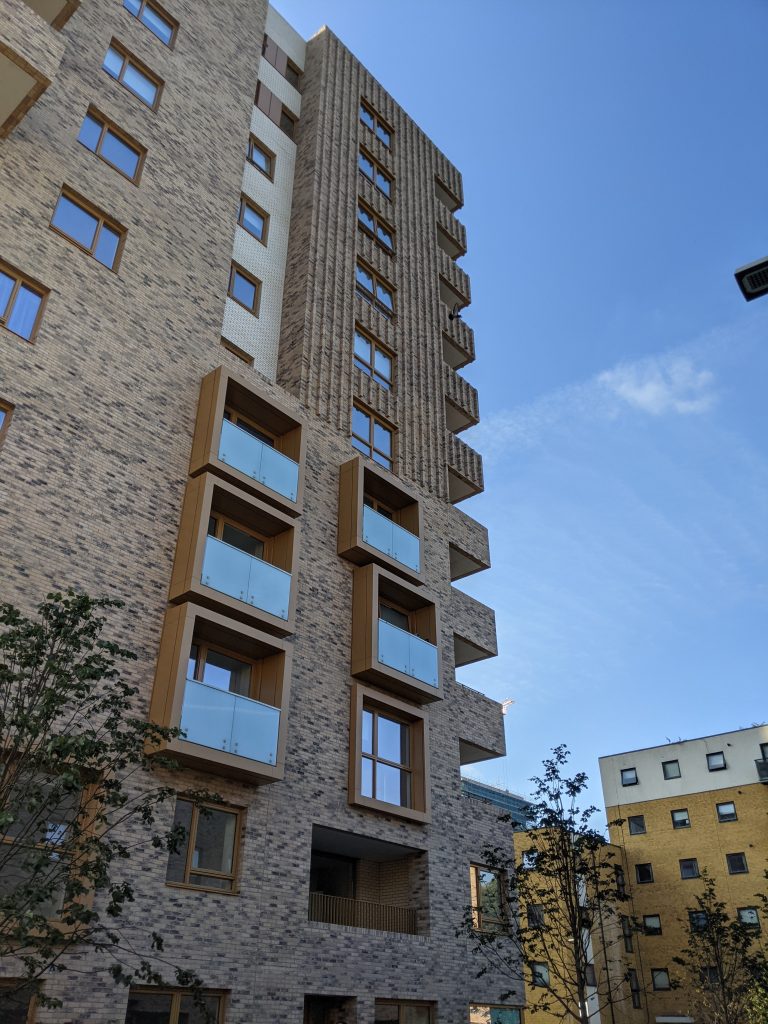 But then we have some pleasing brickwork and detailing across blocks.

In the late afternoon sun the warm colours matched a blue sky. It’s a lovely place to be in places.

However I’m not here to be Peabody’s PR arm (there’s plenty of outlets that do that) and how some parts look now isn’t how it was supposed to appear according to prior planning applications. The water feature in the heart of the square has greatly reduced in scope after late-stage design changes approved in 2020:

Here’s the site from the square, with a very small area for a water feature and fountains yet to be switched on:

Cygnet square is the heart of the area, as Tavy Bridge formerly was. However there’s one major problem; the Thames Water works and elevated roundabout to the north and act to sever the site from housing in much of Thamesmead over the dual carriageway, thus passing footfall is very limited from the north.

What would help any occupants of commercial units moving into the new square are new homes to the immediate north in an area between the site and dual carriageway and Thames Water works.

This being Peabody, there’s no submitted plan for housing on the neighbouring plot though they flattened the area at Binsey Walk in 2019.

There’s not even any final design drawn up – so it will be years before any work begins. A rolling program starting on site as soon at the phase with library and square finishes is not happening.

That’s ensures a crucial lack of custom for occupants of units at the square, which will greatly impact viability of new shops and amenities.

Unless Peabody are willing to offer extremely low peppercorn rents – and in a public online Q&A events they refused to do so – then the square could become a windswept place for some time.

It’s not just land to the north that’s vacant without any submitted plan to built, let alone approved, but now a vast area to the south running along Harrow Manorway.

Peabody flattened that too, evicted occupants and shops and once again have yet to submit any detailed plans. They’ve even stated it may be as late as 2040 before homes are completed on parts of the site which is frankly pathetic.

That all impacts viability of the new square if it’s surrounded by wasteland. The homes being built as part of phase 1 alone are not enough so sustain new business on site.

Peabody’s failure to plan and build a rolling program on sites six years after the area was designated a Housing Zone – and almost a decade after taking over land in the area – is not only to the detriment of those in need of high quality, truly affordable housing but the civic heart of the town.

Look at archive photographs and video of Thamesmead in the 1970s and it’s clear this was a place where a lot of money and love was invested into design. Tavy Square was a place that had a lot going for it, but money and attention fell away and it became an unloved place.

How Thamesmead changed from flagship Greater London Council estate to 1990s failure is a testament to how initial appearance means little without ongoing, rolling plans and funding.

Tavy Bridge certainty had design flaws. One of my earliest memories of Thamesmead is arriving in a car into near-dark car parks below the shops, getting out and clutching my dad tight as we walked through broken glass towards shops above.

Those undercroft areas are mostly gone with the new square and housing.

But Tavy Bridge also had great open space above the parking as videos shot shortly after completion show:

By the time I used to visit in the late ’90s, the pioneering days were long gone and it was on its knees.

Thamesmead’s failure wasn’t just design but the result of being a Greater London Council flagship estate which then proved its undoing. The GLC were being wound down with estates across London passing to borough councils. Councils would then dump problem tenants on the GLC who had an ever shrinking pool of places to house them.

Thamesmead was one of them. The GLC lacked funds to deal with ensuing social problems.

As for the new design, will expensive landscaping suffer the same fate in years to come?

Maybe Peabody are pulling back on design such as water features given long term uncertainty.

It’s not just the water feature in the square now a fraction of previous size. Another water feature (it isn’t really a stream or river) running past housing near the square has apparently gone:

Hard to make out whether it still exists in these renders: 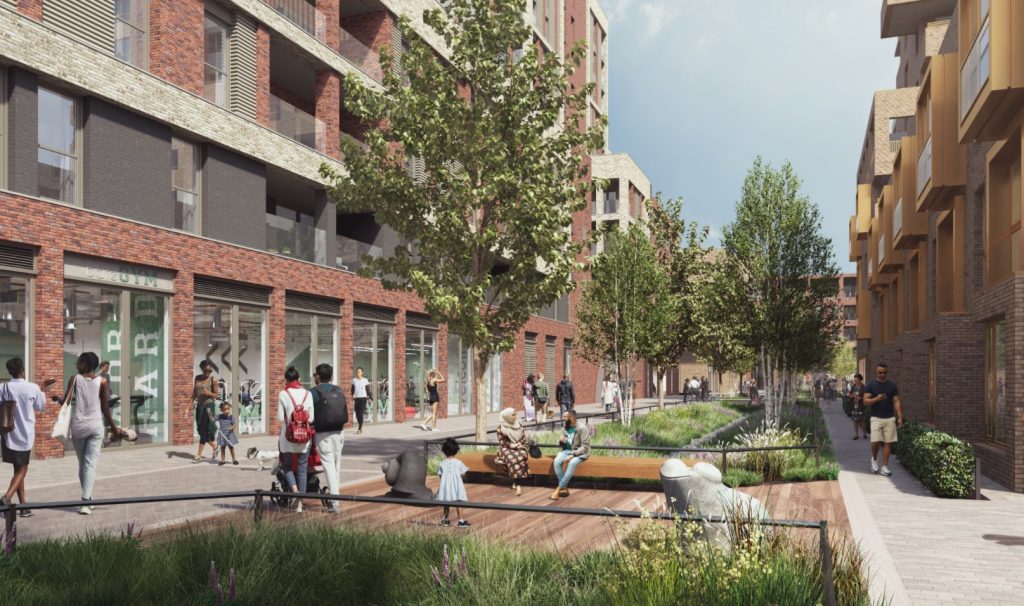 There isn’t cost cutting everywhere though. The buildings have retained a degree of detailing missing from most new-builds, and even the setts are fantastic: 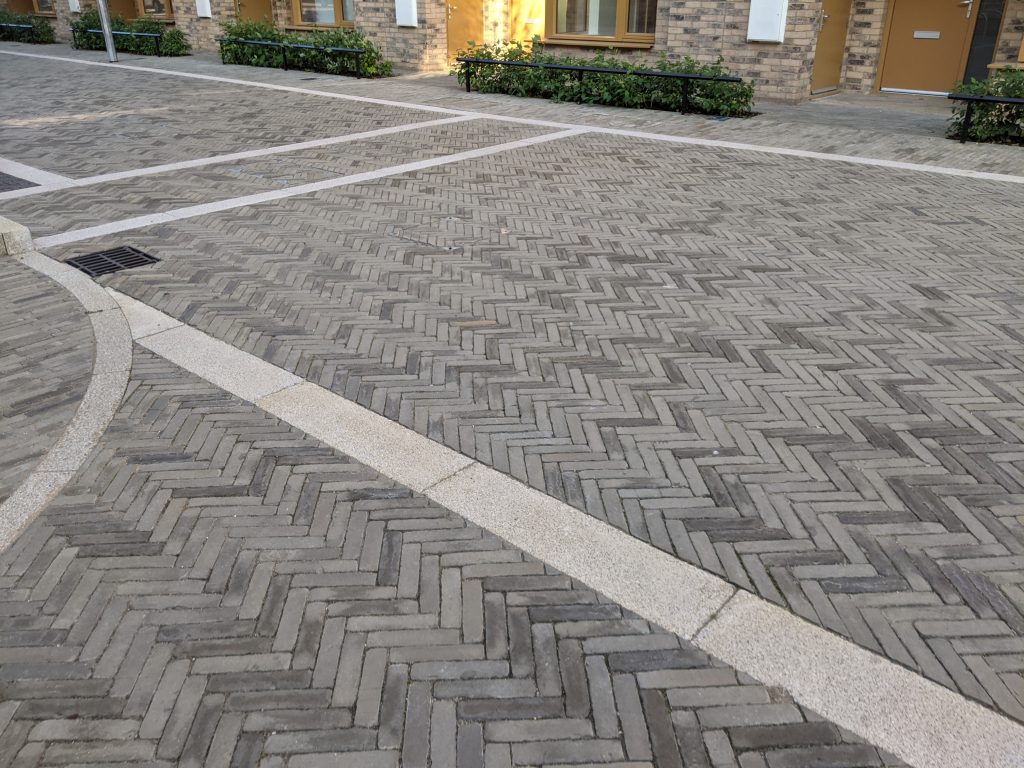 It’s lovely stuff and the kind of thing that only really stands out in person.

New homes have lovely big windows as the original housing did. 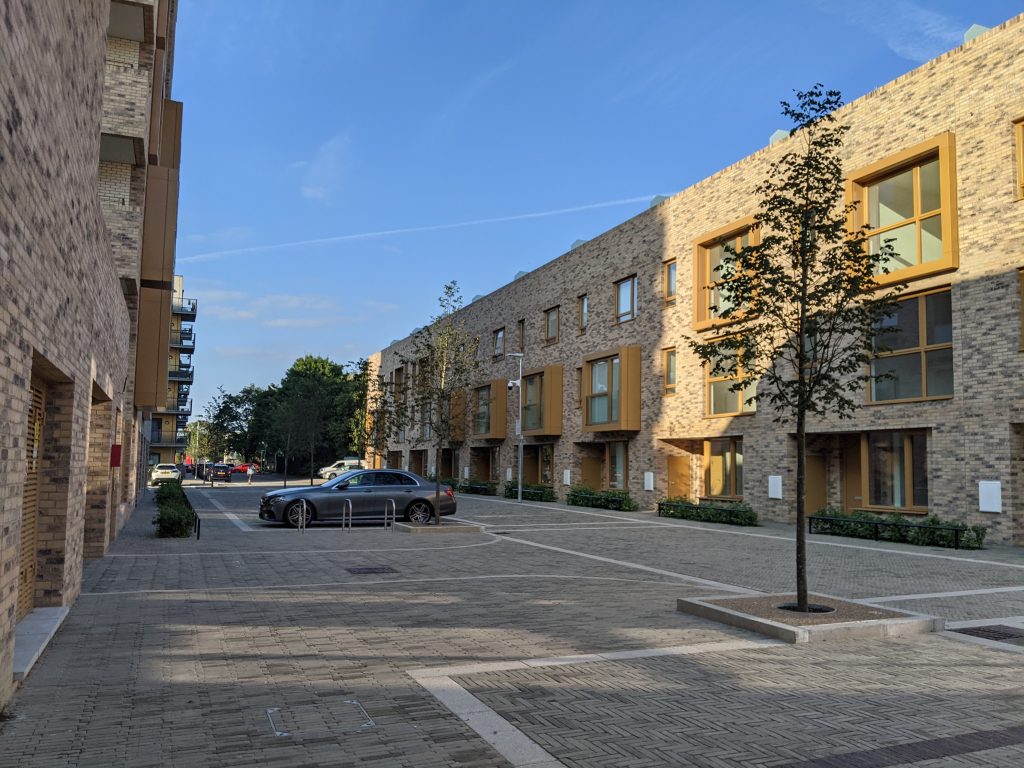 Mind you i can see complaints from some about large ground floor windows close to streets at areas of high footfall such as bus stops.

While Peabody may be slow to build, surrounding sites in Abbey Wood are moving such as two tower blocks visible from the site:

Even with Peabody’s slow build-rate, the face of Abbey Wood and Thamesmead is quickly changing.

The first residents have now moved into the first phase of Thamesmead. No shops yet. Whether many do – and survive – depends firstly on Peabody offering low rents and then getting moving on thousands of new homes nearby.

First homes on Greenwich Council Housing Zones in for planning