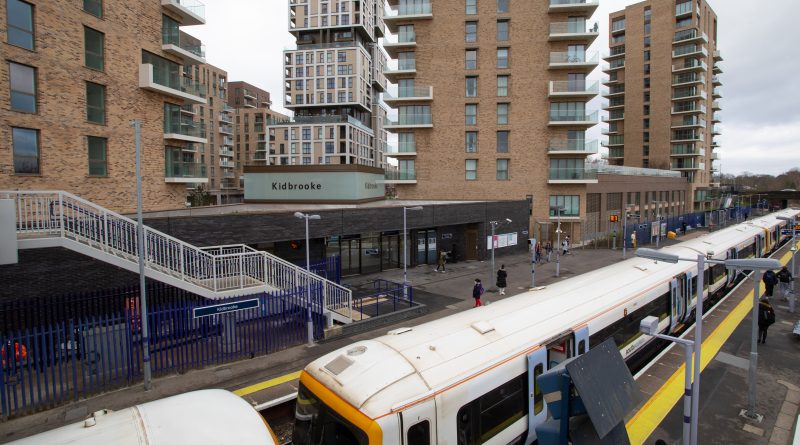 A new station building at Kidbrooke has been opened.

The new building is to partly serve over 5,000 homes at Kidbrooke Village, and faces onto a recently constructed square. The station doesn’t appear to include ticket barriers based upon photos with the ticket office beside the platform.

Who skimped on that? It’s very rare for a new station to open and lack barriers, particularly in a fast growing urban area with usage at 1.558 million a year. It’s not a case of installing for future use; they just havn’t been installed at all. Current levels in a pandemic will not l;ast forever with thousands of homes being built, and many without parking. Berkeley Homes have built the station which would need staffing by Southeastern.

Perhaps the never ending limbo of the Southeastern franchise meant they didn’t commit to staffing levels throughout the day, and the Department for Transport didn’t insist. This perhaps doesn’t bode well for Lewisham’s new station entrance now being built as part of a 27-floor tower.

In recent weeks I also looked through planning documents and related plans for a new bus and rail interchange on the other side of the station beside a TfL development bringing over 600 homes, and again saw no evidence of any barriers – let alone a station building to serve those homes or other nearby developments such as Greenwich Council’s recently approved block with 120 homes.

Like many other Southeastern Metro stations it will be easy to avoid paying. One of the few stations on the Metro network (possibly the only one) that is staffed and sees barriers in use all day until midnight is Abbey Wood after TfL took control. Counted passengers saw an immediate jump of 50 per cent when staffing for barriers was in place.

A press release for the station opening includes a lot of old waffle – and manages to get the number of homes at Kidbrooke Village incorrect after recent planning approvals raised numbers. Let’s see if local media outlets rehash it word for word.

Just today one reported a barely disguised advert for Peabody on Thamesmead, with some completely incorrect travel times from nearby Abbey Wood station. Apparently it’s currently 25 minutes to Bond Street.