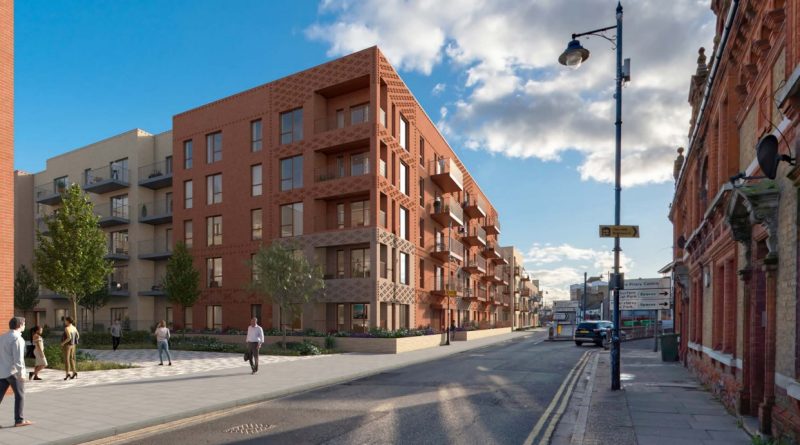 An application to build 71 homes on Lowfield Street in Dartford has been submitted as the final plot in the 637-home Copperhouse Green development.

The site is currently used as a church and surrounded on both sides by housing development on what was Tesco’s abandoned site for a superstore.

Tesco sat on land for a decade without building, bought up stores on Lowfield Street then left buildings to rot and become a blight.

Bellway Homes are now constructing Copperhouse Green after taking on land from Meyer Homes who purchased former Tesco land at Dartford, Woolwich and Lewisham (where clearance work at the site of a 30-floor tower is now underway).

Dartford is not seeing anything like that, with mid-rise buildings planned.  The tallest buildings can be seen in a render below. They taper down towards Lowfield Street where some existing buildings are to be renovated:

Five floors are proposed for this plot in a town centre site. I’ve covered previous plots in a 2019 post which can be seen here. The phasing is:

The level of ‘affordable’ housing is almost none-existent in this phase. There are seven shared-ownership flats, which given the need for a mortgage, rent then unregulated annual service charges on top often results in expensive housing no befitting what many would consider affordable.

Last month I covered plans for a block the other side of the railway, where other sizable development is taking place at Mill Ponds.

Elsewhere in the town there are plans to renovate the long-closed former co-op.