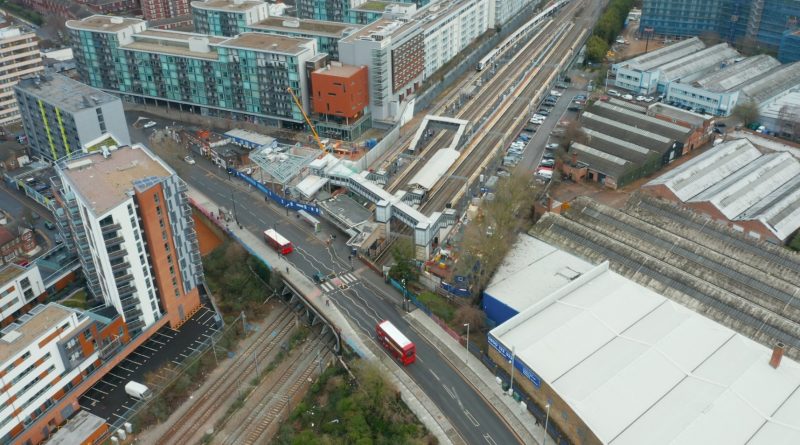 Crossrail have today released a number of aerial images showing various stations along the route.

Much of the works is years late, but at least a finishing line is in sight. What’s interesting to me about many of these photos is they show just how much scope there still is for new housing around stations.

Crossrail’s aerial images start at West Ealing where a large retail shed and car park sits next to the station. With John Lewis and Waitrose’s current problems, perhaps a profitable endeavour would be to rebuild as mixed-use. They can keep the supermarket and parking with new homes above. Voila, there’s more custom for public transport, more for the shop, less reliance on cars, less family homes being divided into flat shares (if new homes are affordable) across the wider area and a pretty much a win all round.

Retails sheds and car parks around busy urban stations are a common site on the images Crossrail have released.

Head west to Southall and it’s a similar story – though there are big developments further away.

On the eastern stretch similar retail sheds are located near major stations such as Romford:

Not all stations are amongst tarmac and wasteful low density commercial buildings – but too many are. One way to prevent sprawl onto greenery is build up around stations. Many of these places are ripe for mid-rise or higher. The sky wouldn’t fall in at Waitrose in West Ealing if a 5-6 storey block was built including a new shop.

I’m sure the usual comments about noise will be made, but there’s ample solutions to that, and it’s probably far nosier than living in a family home converted into a houseshare.

Incentives could be provided to encourage building, with incentives not to build homes in new developments such as a zero CIL rate for parking removed at future sites. Perhaps a tax on large supermarket or retail parking spaces in the immediate area around stations would help.

2 thoughts on “Crossrail release aerial images of stations along route”