Details are emerging of further issues within Greenwich Council’s Planning Department as a crucial document to guide development across the borough runs way behind schedule.

A document called the Local Plan guides development in every local authority across the country. It determines what is built and where. How many homes and much else besides.

One crucial component is the Site Allocations component which determines what type of development occurs on various plots of land.

Here’s how the timetable for this document should have looked yet it appears only the first stage has occurred and the rest is running up to two years late with no sign of stage 2 beginning:

This delay could cause serious problems across the borough. Much needed housing could be stalled or developers could appeal council decisions due to the absence of  recent guidance.

Developers behind plans for 74 homes in Eltham remarked upon the plan in their recent submission: 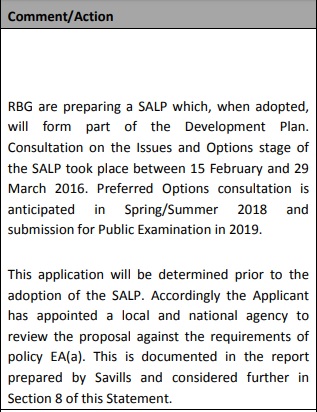 They also mention that the delay means they’ve had to submit more evidence and documents as the site is not classified as suitable for housing.

It’s not the first time there have been issues within the department. There’s the infamous case of William Hill’s appeal for a branch on Plumstead High Street whereby Greenwich failed to respond to the planning inspectorate or submit evidence at an appeal meaning costs were awarded from taxpayers to the bookmaker.

Greenwich Council’s behavior was called “rather extraordinary” and the inspectorate highlighted their “virtual silence” when contacted.

Then there was the curious case of a draft masterplan for Woolwich drawn up at high cost around three years ago which would have capped tower plans in front of Tesco. At least it would have except it never progressed beyond a draft in 2015-16 and was never formally adopted.

After years of enquiring the eventual response was that it was seen as better to draw up a more comprehensive masterplan for Woolwich – which means the tower probably sneaks through. No sign of that other masterplan by the way.

No specific masterplan removes a major plank in the councils argument against the tower. They approved a tower 10 years ago on the site setting a precedent and the failure to adopt a new masterplan now leaves them open to a successful appeal by the developer if they should refuse (plus additional costs fighting an appeal).

Moving slightly west and similar issues arose. In Charlton a masterplan was drawn up in 2012 permitting massive car-centric retail parks and superstores now contributing to increased pollution and congestion.

As just about the last retail shed was complete an updated masterplan was approved which then decided mixed-use was the way forward. A bit late by then.

Planning Department’s have seen cuts nationwide yet Greenwich should be insulated to an extent. The Community Infrastructure Levy, whereby developers pay money to an authority at rates shown below will bring in very large sums due to large-scale development, as is the New Homes Bonus at £13.7 million this year.

We also know just how much Section 106 payments have brought in.

Councils can decide how much CIL income they wish to spend on staffing and administration, and Greenwich have opted for a total less than possible.

It leads to delays, errors and a loss of money as income from developments is unspent before deadlines elapse.