Developers HUB have submitted a scoping report to Greenwich Council for a development of 250 homes, a 90 room hotel and 350 square metres of commercial space at the Cross Quarter site at Abbey Wood. Stage one completed last year and comprises a Sainsbury’s supermarket and 31 flats.

The main standout in the proposal is for a 27-storey tower at 88 metres in height. It would be located a minute or two from Abbey Wood station, and seems an ideal spot for building tall.

HUB purchased the site last December from U&I, who are behind numerous developments at Greenwich, Deptford and Charlton Riverside. The relevant page on their website shows some low quality images and hopefully isn’t representative of final plans, as the design looks underwhelming and dated.

There’s scope for a fair few high density buildings in the area to make use of Crossrail’s arrival. The industrial estate next door is now listed as suitable for residential in draft council planning documents. Given that industrial estate has long struggled to find tenants and has seen years of illegal use, a change in classification is acceptable. The tight approach roads alone procure large vehicles from approaching which is a bit of a flaw for an industrial estate.

Peabody also have plans for building on a petrol station and light industrial buildings near the station, which they have named as ‘Sedgemere Quarter’.

There’s also a large vacant site north of the supermarket that could see tall buildings, plus the travelers site beyond that. Given population increases and the demand for mass housing close to high quality transport links, is it wise to have such a low density site so close to what will be a major station?

It would be contentious and difficult to move, but assuming alternative sites are provided and suitable financial compensation offered, the site would provide housing for many more people which is badly needed as the population quickly rises to 10+ million.

There’s also the underused sites used by a single-storey Lidl, car wash and vets. All grossly under-utilise land that will be five minutes walk away from the Crossrail station.

And it looks as though it won’t just be Crossrail that additionally come to the area – plans have been revealed for Thameslink services to possibly run along the Abbey Wood line. Services would run from the Medway towns in Kent along the line to various stations in central London and beyond. This would offer direct trains to central London stations such as St Pancras before heading through north London via Hampstead to Luton Airport.

So by 2018/19 the station could offer trains on London Overground (assuming the proposed takeover of Southeastern in mid-2018 happens), Crossrail in late 2018 and Thameslink there or thereabouts. Transport links across London would be vastly improved. 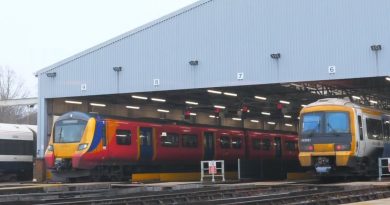