Apologies for the lack of updates. I havn’t been in SE London much at all recently. Anyway I’ve found these detailed renders of the next stage (Phase 3 – The Warren) at the Arsenal site in Woolwich in a planning application that’s just gone in. 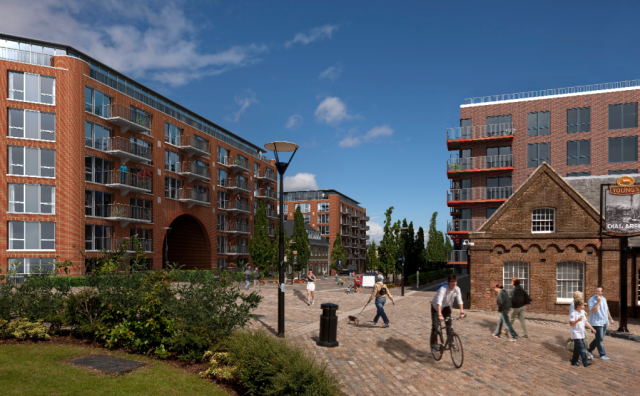 The new buildings match the newest block just behind the Dial Arch pub (as seen on the left of the image above) pretty well. The older building is the Royal Laboratory buildings which will be refurbished. The construction of new buildings will creep slowly towards the skate park and Waterfront leisure centre in future years. That whole area, currently a car park opposite Riverside House, will see the next big changes as towers are built on the riverfront. The numbers of new homes across the masterplan planned is higher than initially thought with taller towers planned, so Berkeley homes can raise more money to pay for the Crossrail station box. The preparatory works for that began in the summer.

Any opinions on the designs? Though not exceptional they are quite attractive, and match the new development over the other side of No 1 Street, which I am really quite keen on. The rounded brick edges of the next stage remind me of a few 1980s buildings, not least the one over the road which comprises Lidl. Probably not the connotation Berkeley wanted, or will include in their promotional fluff.

One other thing – how tatty are the buildings along that parade where the indoor market is? I remember taking some snaps of them over 5 years ago as I thought they would be for imminent demolition. Passing the other day it was hard to believe they are still standing and no developer has bought the land.

I run the site myself and pay all hosting and ongoing fees. If you want to help, you can make a one off donation or become a regular supporter here