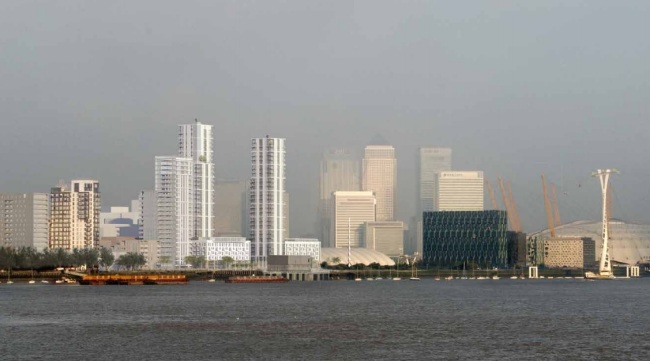 My next post was going to be more about the various things planned for Eltham but I’ve decided to put this short post out as it concerns proposals that are being considered for planning permission very soon.

Development on Greenwich Peninsula is finally picking up the pace. Plans for five plots and the jetty are due to be decided next Monday (sections in red to the left) and include a couple of towers. I’ve had a look, which wasn’t easy as Greenwich Council’s website kept crashing and bringing up various error messages.

It appears that the developer (Knight Dragon) wants the building on Plot M0116 to ignore the carefully designed plot boundaries from the 2004 masterplan, and have the building jut out halfway across the street hampering views from the park to the river.

The image on the left shows the red lines of the intended avenue width in the 2004 masterplan. The blue line shows where the new building will intrude over the street ruining the harmony of buildings lining the road. They will no longer be flush and offer consistency.

The other half of the intended park to river view will have trees blocking the vista.

The other image on the right has a red boundary outline, which shows the building size of the structure now in for planning permission, and how it is larger than the planned size (in white) the masterplan allows. The park to the south west loses direct views to the Thames.

Let’s not forget that the masterplan was drawn up at a high cost, over many years and under the guidance of experts.  Then developers come along and ignore one of the core aims. This is where the local authority needs to ask questions. It should be noted the boundary section facing south west refers to the landscape area in for permission and the building will not intrude there, only onto the avenue running from the park to the river.

To partly circumvent the masterplan’s aim while still hoping to gain permission the proposal allows pedestrian movement at street level based upon the original designated boundary, and only leans out at first floor and above levels. This will also increase the overbearing nature of the building on the park right next to this section.

One of the best things about grid type layouts, even of the small type planned for here, is the vistas they provide between narrow avenues and buildings. By allowing buildings to block them it ruins the effect. And if allowed here then one plot application after another will ignore the plan.

There have already been previous changes to original plans such as cutting the number of affordable housing units. Now just 21% of homes on the 11 plots being developed across the peninsula will be affordable, or in terms of rooms a drop from 38% to 25% as can be seen on the 853 blog.

I will have a look and see what else turns up in these plans. And get on with that intended look at other Eltham schemes.

EDIT: Here’s another image that shows the building will intrude 7 metres into the avenue, and 20 metres further from the original building line which was set back. The red block is the masterplan intended plot, and the new proposal is to the left – 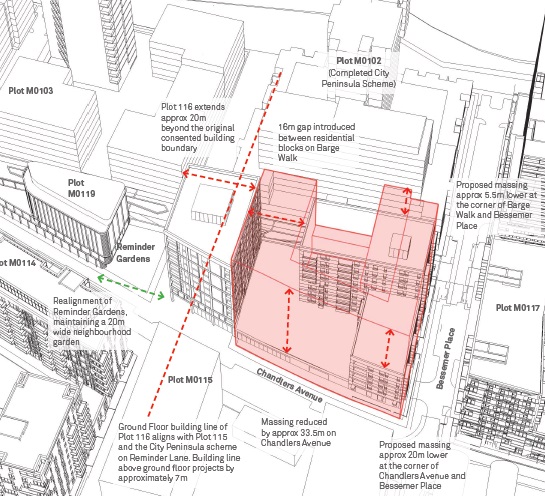