Greenwich council have just launched a consultation on potential development sites across the borough. It covers various plots and whether they are suitable for housing, parks, retail or industry. Details can be found here, with a map available here.

On the map page you can zoom in to see individual sites. There seems a bit of an imbalance of sites in different towns. In places like Plumstead it seems to be more comprehensive as even many small plots are highlighted. This is likely as a result of the Plumstead Urban Framework recently drawn up.

Less so in other areas. Despite Crossrail arriving at Abbey Wood, and developers making various plans, a fair few obvious sites are not included. A cohesive plan for the area is still lacking. There’s some omissions, such as the Lidl plot and other very low density uses just a short area from the station. The crumbling Post Office site, where Greenwich Council rejected housing plans, is also not covered. The BT telephone exchange is however covered as possibly converting to residential.

In addition, land directly beside the western end of the station platforms is also absent. This site was formally a council depot and garages. It is extremely likely to become housing. Forthcoming development on the site could help fund a second station entrance. It would cut off a substantial walk for many in Abbey Wood and Plumstead.

Charlton seems pretty well covered. Some of Charlton’s retail units are labelled as mixed use in the future. A bit late now they’ve approved expansions at various locations. A large warehouse unit on Victoria way is labelled as suitable for housing. Half of the site was converted around 3 years ago.

The council are looking at an alternative route through the industrial area. They are asking whether it should be bus only or a normal road.

Woolwich seems to have comprehensive coverage. The one thing I saw that caught my eye was plans for a small ‘community open space’ on a patch of former DLR land just south of the Spray Street masterplan site. This wouldn’t have a great impact on long stalled plans for housing above and around the DLR station. One curious omission is the extremely ugly block of council owned garages a stone’s throw from Woolwich Arsenal station. A prime spot for housing:

In Greenwich there’s some less obvious sites highlighted for development. Land behind shops on Greenwich High Road are listed as suitable for residential, as is land on the site of Davy’s Wine Vaults, though listed buildings will remain. 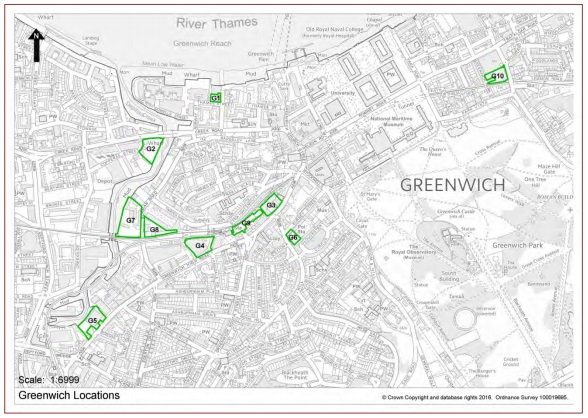 It’s well worth having a look as there’s way too much to include in one post here.

The plans also include possible sites for schools and where they are located, along with transport and industrial locations.

Pop in sessions will happen on these dates:

Once again, to read the document and send your comments click here.

The New Flats At Woolwich Arsenal