Every year London councils receive a pot of cash from the Greater London Authority to spend on local transport and public realm improvements. Things such as cycle lanes, safety schemes, and making streets more attractive for residents and visitors. New paving, attractive lighting and street furniture, removing clutter, that sort of thing. For years Greenwich have been receiving millions each year, and there’s not much to show for it. This year Greenwich will receive funding of £2,454,000 for local schemes. There is also £100k discretionary funding. Information can be seen by clicking here under item 6. Yet again there appears to be little focus on sprucing up streets and public spaces. Neighbouring Lewisham borough gets less money – £2.233m for local schemes. In contrast to Greenwich, Lewisham council prominently states one if its main goals as ‘improving streetscapes and physical accessibility by enhancing the local urban realm’. The neighbouring borough to the east, Bexley council, gets £1.659m to spend on local schemes. Bexley council’s plan can be seen here. They receive less than Greenwich, yet also state a clear focus on public realm improvements which is lacking from Greenwich’s documents and previous behaviour. Bexley has plans such as –

One thing immediately obvious is how hard Greenwich make it to find out what they will spend the £2.5m on. Information is sorely lacking, perhaps showing how little some in the council and councillors are possibly even aware of it? Another is how little detail the Greenwich document contains on public realm improvements this year. It seems to be of very little importance to council departments, officers and councillors. It’s that lack of attention that perhaps helps explain the ugly mess so many areas sadly are. When I visit areas across Greenwich borough I often hear people putting down their areas, and even appearing quite ashamed of them. Visitors are the same. And you can’t blame them given the state of many areas. There’s little in these plans to make streets and places attractive and beautiful, places that people can be proud of.

There are mentions of possible large improvement schemes in coming years but only in the middle of major town centres. Nothing for local streets and neglected local centres, either this year from that £2.5 million or from future spending, continuing the long term lack of attention and decline.

TfL have removed thousands of miles of guardrails across London over the past 5 years. They have placed huge emphasis on creating more attractive streets for the benefit of pedestrians and business. Under Ken Livingstone and Boris Johnson there have been various schemes and funds. The ‘100 public squares’ scheme was one such, which created the new square in Brixton along with the improvements to the two in Woolwich, which are now vastly better. A street that is pleasant and well designed is one that people will want to visit, stay, socialise, have lunch and shop, and one where businesses have a greater chance of prospering through increased footfall. Many London councils have followed their lead. Travelling around London and across the UK show huge strides have been made in recent years. However there’s hardly any evidence of such learning and improvements in across Greenwich borough, despite the money being there for improvements. Any improvements that have occurred have come from outside agencies. Schemes such as the Woolwich Squares project were aided by the Greater London Authority and Design for London. Streets under the routine control and maintenance of Greenwich council show few improvements, or advances in thinking on the public realm.

Street furniture is almost always installed with minimal thought or care, it is almost always the cheapest and most utilitarian, and maintenance poor. Often thousands will be spent on bizarre schemes that place guardrails across paving in areas with broken walls, bent street furniture etc which are not treated. See this shot below in Abbey Wood of how the council put in guardrails blocking one entrance to a footbridge, whilst the bridge is covered in graffiti (and has been for years) whilst the railings on the bridge are broken and rusting.

Around that area there are many white fences, mostly surrounding garden areas next to blocks of flats. The white fences were nice enough, but the council stopped maintaining them about 10 years ago. They have since rusted, with paint peeling away, and many are now bent out of shape. As can be seen, weeds are left and stains on the building build up after many years with little maintenance. There’s worse example around there, and just about every fence panel (there’s lots) is in terrible shape.

Treating those fences and replacing if necessary used to be carried out annually. Priorities changed, and no upkeep occurred for at least 10 years. None of the many years worth of LIP funds has gone into improving the area. None of the cleansweep budget has. Nor has it spent anything from the many other sources of income it receives. One of the local shopping parades looks like this

Pretty grim. It actually had some money spent a few years ago but the results show Greenwich council’s design ineptitude. It removed areas with trees and plants for ugly, cheap paving. They got the cheapest street lights imaginable, and somehow found some new pebble dashed bollards last seen in ’70s housing estates. A fraction of the £2.5m budget could yield real improvements here.

Below is a major junction in East Greenwich. It’s a horror. Any spending this year out of that £2.5m, or from developer’s section 106 payments from new developments facing onto it? Not that I can see.

Below is a road in Plumstead/Woolwich with guardrails lining hundreds of metres of road. They serve little purpose, are ugly, and make the pavement very narrow and so difficult for people in wheelchairs and those using buggies, and also present a danger to cyclists if cars or buses push them towards the curb. 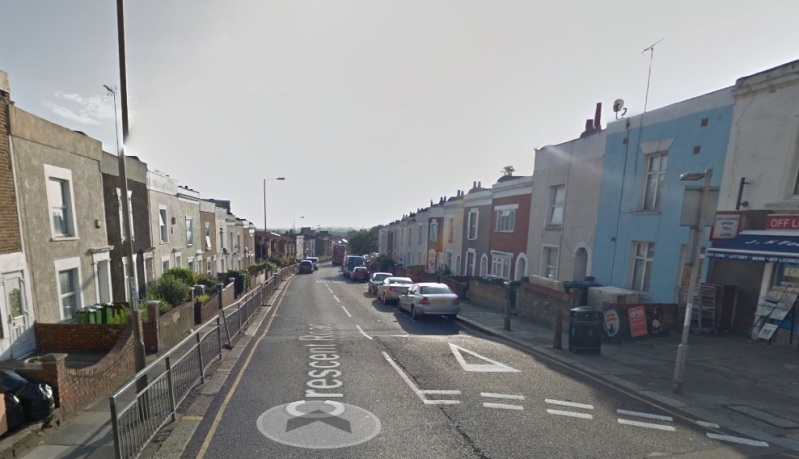 How hard would it be to send workmen to cut them down? It would cost little and take a day. Things like this are a legacy of misplaced highways thinking. But Greenwich are still installing things like this across the borough, and even replacing stretches at a cost of thousands, often in areas crying out for investment.

Here are some in Charlton. What’s the point?

Nearby is the new development that houses a Sainsbury’s local, as seen on the left in the image below. Whatever section 106 developer payments to the council went towards it wasn’t public realm improvements. The building has a large ‘footprint’ meaning narrow paving space outside. Not that it has paving but tarmac. You can see how it juts out and isn’t flush with the closer buildings meaning a narrow pavement. Not ideal outside a busy shop. 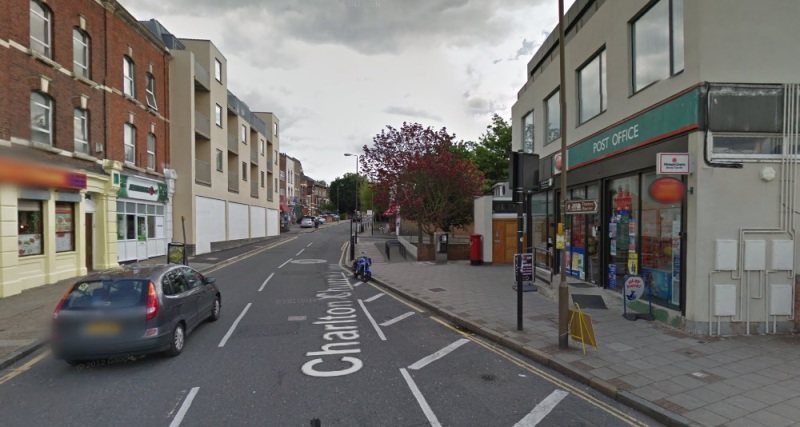 On the right a sign has been installed about a metre from the lamp post. This is an example of waste and a lack of common sense. It would have been cheaper and easier to attach it to the lamp post.

Finally here’s an image from south of the borough in Eltham. The high street is again lined with guardrails. Lighting is again utilitarian. Little love or care has been shown to a major shopping area. There’s many many examples of better high streets across the country.

Hopefully Greenwich will use some future LIP funding to improve this. They are spending 344k on Eltham from this years LIP budget (awarded in addition to the £2.5m for other schemes) but only on planning and preliminary work. The paving on the left could be wider as it’s currently unused tarmac, and the additional space used for outdoor seating for potential cafes and pubs. I welcome the plans for Eltham as it actually shows some focus on public realm improvements, yet its a shame that only select few town centres have this attention.

I hope things change. The councils record, dating back at least a decade, doesn’t bode well. Advances and improvements seen all over London and the country may one day seep into the thinking at the town hall and Woolwich Centre, and the borough belatedly catches up. It isn’t a question of money so much of priorities and better design knowledge. Many streets declined and neglect increased when the council were enjoying budget increases in the years leading up to local authority cuts after 2010. And even with those cuts Greenwich borough still have £2.5 million to spend this year, and the same amount for following two years, from the Local Implementation Plan fund. There’s also EU neighbourhood money to chase, and the large amount of section 106 payments from the many developments across the borough. As well as the £1 million extra allocated to the cleaning budget this spring. Immediate improvements can be made quickly and cheaply by carrying out an audit of pointless signs and guardrails, and removing them. If there aren’t substantial changes in the coming couple of years there will be questions to answer as to why the council aren’t utilising available funds and why councillors aren’t pushing officers on this issue. The record of at least the past decade is worse than most other authorities. Will it change in future?