The next stages of Berkeley Homes development of the Royal Arsenal site are coming to light. Quite a few reasonably tall buildings will line the riverside, replacing the Waterfront leisure centre car park as well as the park next door.

The plans see a main thoroughfare leading through the site towards the river. The density will be high as Berkeley homes seeks to capitalise on its investment in the Crossrail station box. Greenwich Council’s Woolwich masterplan also envisages closing the existing leisure centre in future and moving to a site closer to the town centre. The site would be replaced with a mixed use development, shared space where the dual carriageway currently is, and Hare Street extended and continuing to the riverside, as it existed before the ferry moved to its existing site and the Waterfront centre built. The planned closure of the ferry would also free up riverside land. However these are aspirations, and with the planned towers next to the current ferry site not showing much sign of progress don’t expect this all to happen quickly.

One of the next stages to be built is the snappily named ‘block C1’ as part of stage 5. This building is just west of the Heritage centre. The building follows the design principles of many of the previous buildings as can be seen below. 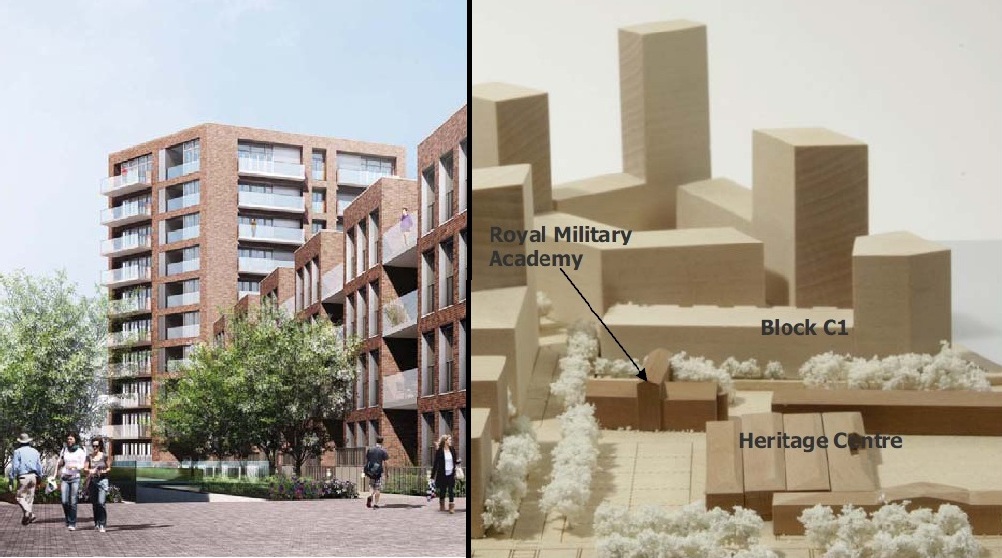 Also on the Arsenal site the Crossrail Station Box has recently been completed.  The box is 256m long. It seems like just yesterday that the car park was closed off and the hoardings erected. 400,000 working hours and 200 jobs were created in the process of construction.  Impressive work. There will be an open day on February 27th from 3pm to 5pm to visit the site. There will also be a charity run held within the box raising money for children’s hospice charity Demelza. To register interest you can contact woolwichstationbox@berkeleygroup.co.uk

Click here for crossrail’s page with further details, a timelapse video and photographs.

One of the most striking stages of the Arsenal development will be the towers above the station box. This is stage 4 of the Arsenal masterplan. Two of the buildings can be seen below. The most striking features compared with previous stages are the usage of yellow brick, the height, penthouses and glazing on the top of the buildings, and the style of balconies on the tower.

The image to the left shows the towers behind the two buildings shown above, and are in the same style. From this perspective the design appears overly ‘busy’ and quite cluttered. The image below shows the tower from the opposite angle. It appears quite lumpen. The balconies on the corners add to the bloated appearance. A better solution may be a continuous row of buildings below 10 stories with varied facades to break up bulk and monotony, with retail at ground floor level, rather than a number of stumpy towers with fussy facades and detailing.

In some ways in reminds me of the Holiday Inn in Brighton as seen below.

Directly opposite the proposed phase 4 buildings, and very close to the proposed Crossrail station, are a row of buildings in a neglected state on the other side of the road. Some are in appalling condition and appear to be falling apart having been empty for years. The indoor Woolwich market is part of this neglected row. It would not be a surprise to see many of these buildings purchased, demolished, and new proposals for redevelopment arriving in coming years.

Trip to the States

What to do with a problem like Southeastern trains

0 thoughts on “The Future of Woolwich Arsenal and Crossrail”