My last post showed the number of people using trains last year from each station on the Greenwich line after figures were released. Below are the figures for other Dartford bound lines. In addition there are details of stations served by trains from all 3 lines, both in inner London and also stations past zone 6, where many SE London suburban services continue. The average growth across all of London in the year 2012-13 was 5.3%. The national average was 2.3%.

Sidcup line. Two stations exceed the London average but many are below –

Inner London stations. Served by more than one line –

Lewisham’s figures look impressive but are flattered by including Freedom Pass data for the first time.

Central London stations. Two here are served by other franchises so it’s difficult to gain a clear picture. Cannon Street dropping is odd. Perhaps it is due to the rebuilding process then ongoing.

Kent Stations. These are beyond the London zone 6 boundary. 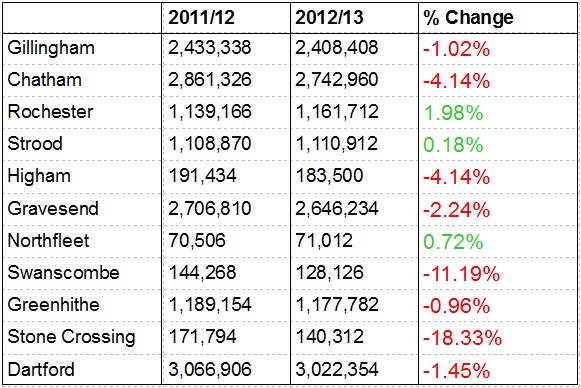 The figures above are very poor. Figures for southeastern’s London stations are also poor. Many do not meet national levels of growth, let alone London levels. Regional figures can be seen below.

As I wrote in my previous post, there’s a multitude of possible reasons. One is the cumulative effects of 6 years of the highest fare increases in the UK pricing people off. Another is the ease of travelling without a ticket on much of southeastern’s network across SE London and north Kent due to very few ticket barriers in operation, and no on-board staff. This compares poorly to many other routes in London which have working barriers from the first to last service, due to greater staffing levels and/or on-board staff, and so are better able to measure passenger numbers.

London Overground taking over southeastern suburban routes up to Gillingham would’ve greatly helped. Unfortunately Kent council were strongly against and helped block the plans in late 2013. I wonder how happy they are to see these very poor figures at many Kent stations under southeastern? Presumably they are hoping the Department for Transport will force southeastern to offer many improvements under its franchise extension, at least to the levels London Overground were proposing.

London Overground would have increased services in the evenings and weekends to a minimum of 4 trains an hour on all routes instead of the current level of 2, by utilising trains lying unused in sidings. That is the minimum service level across much of London. Station staff numbers would have been increased so barriers could be staffed throughout the day at all entrance and exits. Fare evasion would have declined. The increased revenue would have helped cover additional expenses. The oyster card would also have been extended to Dartford station.

It is likely that few of those improvements will now happen. Southeastern and the Department for Transport are now in negotiations about future service levels. The fear must be that the DfT see these figures and restrict future improvements, overlooking that there is a big risk that passenger numbers are not accurately measured. They may also ignore latent growth potential in the existing population by improving frequencies to the level seen across much of London. In addition overlooking future growth potential from the many new developments in planning or construction. The redevelopment of the Ferrier estate at Kidbrooke is an example of this. Much land close to Southeastern stations is earmarked for mass house building within the M25 in the London plan, and also past it into Kent along the Thames Gateway.