Across the past few months I have noticed just how many hotels are under construction, or are proposed, for the South East of London. Although there does appear to be a shortage of suitable places to stay in Greenwich compared to other parts of the UK (Travelodge’s are almost everywhere), the impending Olympics appears would appear to be a major catalyst in this process. Here’s a list of some proposals and those under construction –

Poor old Woolwich has a few plans plans in the pipeline, despite other development schemes in the area that have made slow progress such as the Tesco Love Lane development, which is yet to begin. As well as that there are plans to demolish and rebuild three estates around the town centre appear to be now just a dwindling dream with Government funding for regeneration all but stopping.

Firstly a planning application has just been approved to build flats, shops, and a 96 room hotel above Woolwich Arsenal DLR station .

This is a prime spot above the DLR and railway station, and combined with the ‘we must do it before the Olympics’ factor, this stands a decent chance of getting built I’d have thought.

It’ll have new shops at ground floor level and comprise the two distinct buildings housing flats and a hotel. I do hope dreary grey plasticky cladding isn’t used for the smaller block but decent quality stone.

Closer to the Royal Arsenal site on Beresford Street there are hoardings that have been standing for months showing a Premier Inn. This is next to the large temporary car park opposite Greenwich councils’ Riverside House building. Not much seems to be happening though. It will either get going reasonably soon to meet 2012 deadlines, or wait until the next stage of the Arsenal kicks off which will presumably be in a few years now with the downturn.

Greenwich has many, many hotels plans. The sheer number of proposals shows just how unnecessary the proposal to demolish half the market would be, as a lack of space will hardly be an issue. One hotel finished and due to open imminently is the 194 room Premier Inn at 43-81 Greenwich High Road. This is to be joined nearby with a 90 room hotel in Deptford going up right now in the One SE8 buildings by Deptford Bridge DLR station. This was initially refused in 2009 when the plans imcluded twice as many rooms as eventually accepted. I’m a bit surprised this development is going ahead as having read about One SE8, prices there have dropped about 10% in the past year. Again it’s probably the Olympics, and the recent 3 car upgrades on the DLR line, that have pushed it forward.

Moving further away from the centre of Greenwich, the peninsula is slowly creaking to life with the recent arrival of Ravensbourne College, and the office buildings are to be occupied by Greenwich Council and TfL. A rather bland hotel and flats application was given approval recently, despite contravening the master plan. The UK is traditionally poor at long term planning and large scale developments need master plans drawn up to ensure some kind of consistency in scale and form, and have decent layout, and that should be adhered to. It doesn’t seem to matter much though as they seem to be ignored and piecemeal development goes on regardless. The scheme here is for 452 rooms. http://www.greenwich.co.uk/index.php?s=hotel 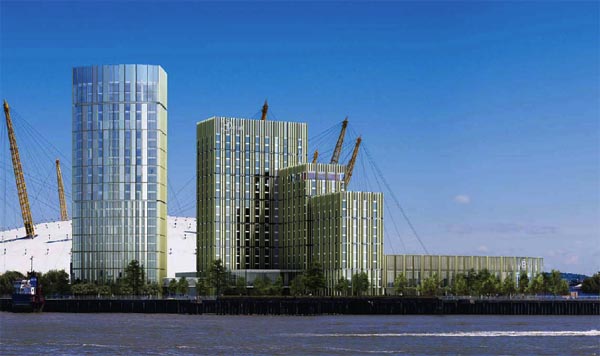 The other biggie is the Cruise Liner terminal at Endersby Wharf that again is supposed to be built by 2012. It seems unbelievable that it will be ready in just 18 months but that’s the plan.

A smaller, and more unlikely site, would see a 47 bed hotel on Tunnel Avenue adjacent to the Blackwall Tunnel approach road. Not the best location, and passed by the planning inspectorate after initial refusal by Greenwich Council.

More speculatively on the peninsula is the plan by Greenwich Inc to build a 20 room hotel on Nelson Road, and a 150 room hotel next to the Trafalgar Tavern by the Thames. 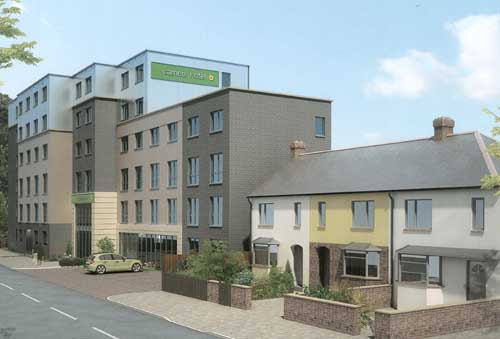 The most interesting aspect in Greenwich is that some hotels (and the cruise liner terminal) are situated away from the middle of tourist Greenwich near East Greenwich, as well as the cluster on Greenwich High Road towards Deptford. Hopefully them opening, and an influx of visitors staying locally who will want to enjoy an attractive environment, will help shops, pubs, restuarants etc, and attract new start ups. Hopefully the openings will cause a sprucing up those areas and bring some life back, particularly East Greenwich.

One would hope Greenwich would use Section 106 payments from these developments to improve the urban environment with better street furniture and paving, and remove ugly and dangerous clutter such as guard rails and ugly streetlamps that look as though they belong on a rural A road, and not streets that should be much more interesting and attractive. At the moment it’s as if you cross a line and have gone from central Greenwich with its well maintained buildings, nice paving, attractive and atmospheric lighting, to streets that could be anywhere with tacky shop frontages, and poor quality street furniture. I know there are obstacles in improving areas, but it has been achieved in many towns.

Trip to the States

0 thoughts on “Lots and lots of hotels in SE London”