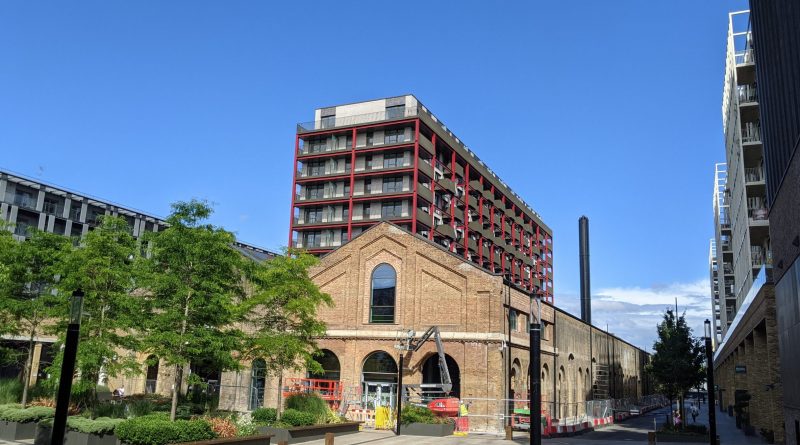 Major changes to a listed Woolwich building bringing 1up to 146 homes and shops alongside a courtyard are nearing completion.

The Carriage Store sits near the new Woolwich Crossrail station and has seen a block of flats built above half the site which is all but complete.

The ground floor area less so:

Ground floor space is set to be opened up with shop units on site.

Other units were planned inside along the courtyard though this has been been reduced in scope:

This work is still someway from completion:

The Carriage Store dates from 1728 and is Grade II listed. It also goes by the name Building 10, facing directly opposite the Officers’ House or Building 11 which Berkeley Homes sought to demolish for a taxi rank and car park.

That faced stiff opposition and instead the listed structure was converted to residential use above commercial space.

Berkeley stated the reduction of commercial space at Building 10 now under construction was due to less footfall predicted than originally thought.

A major development named Armourer’s Court is proposed directly next door from Berkeley and Transport for London which would bring footfall. I’ve covered the gestation and evolution of this project a number of times over the years.

More housing would be possible if Greenwich Council pushed for low-rise warehouses nearby to become mixed-use development including residential. Given those warehouses don’t see heavy industry but uses such as storage of BMW’s it would be far, far better for mixed-use development on site with housing located above businesses such as a nursery or car storage (if necessary).

The site is just a couple of hundred metres from new railway station.

Unfortunately Greenwich Council’s recent Site Allocation Strategy which determines land usage again ignored the chance to do so. So much for transport-oriented development.

I’ll repeat as it’s so odd; vehicle storage is being retained in a planning strategy instead of badly needed new homes near an £18 million railway.

An authority does of course need to plan for industrial usage, though when there’s ample land at the purpose built White Hart Triangle industrial estate in Thamesmead and the authority are encouraging change of use from industry to residential in Charlton in areas some way from rail or tube station, it makes little sense to prevent mixed-use so close to Woolwich Elizabeth line station.

Anyway, for now they’re there and so footfall from the east is expected to be moderate.

I’ve been keeping tabs and as yet there’s no applications for any commercial units within the new development.

Berkeley Homes state that residents will begin moving into the Royal Carriage Works – Building 11 – this month.