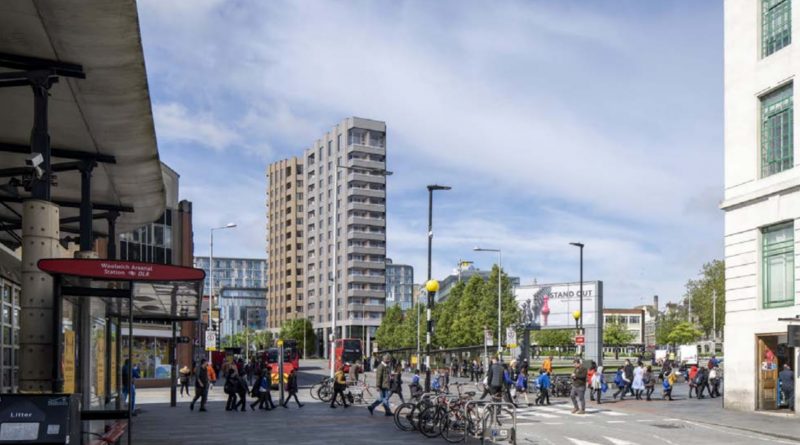 New plans have been submitted by Meyer Homes for over 700 homes in front and behind Woolwich Tesco after a previous tower plan was rejected.

The new block in front of Tesco tops out at 15 floors and 67 metres.

Tesco sold land to Meyer Homes in 2015 after leaving much of the site unbuilt for a decade.

They also sold plots in Dartford and Lewisham.

Hundreds of homes are now well underway in Dartford and Lewisham’s 35-floor tower has now reached the second floor.

In Woolwich plans stalled as Meyer sought to build a 27-floor tower. Greenwich Council rejected the proposal and an appeal in 2020 came to the same conclusion.

The new application isn’t not very complimentary about the existing Tesco:

“The northern and southern frontages of the Tesco development are generally poor.

The southern side along Grand Depot Road comprises little active frontage, with the vehicular access to the car park at the eastern end and elevated entrances to three residential units in the centre plus a number of servicing doors along its length.”

Discussions with Historic England “concluded with a judgement that the development represented the lower scale of less than substantial harm to heritage assets in the vicinity”.

Then again Historic England often seemed mostly concerned with height, and a low or mid rise design of poor quality can often appear suitable with them.

The new block to the front of Tesco facing General Gordon Square would have three commercial units at ground floor levels and “both flexible office and community functions” above.

Three colours are featured on the block:

That grey could appear pretty drab overlooking the square. Despite the size reduction it will still dominate the area.

Formation architects are behind the design.

“Affordable” housing is just 23 per cent across the site. Meyer claims that is the maximum that is viable. It wouldn’t be they overpaid for land would it?

Most homes are located to the rear of the site, with 590 proposed:

Blocks are tightly together here – much as it was in the prior application.

A path links the homes beside the south circular with Love Lane and General Gordon Square.

In total the sites would see 724 residential dwellings if approved and 1,756 square metres of  commercial floorspace (flexible Use Class E).

It’s not the only major change planned for General Gordon Square.

500 homes are planned as part of that development. I covered it recently here.

Click here to view and comment on plans for blocks to the front and rear of Tesco.