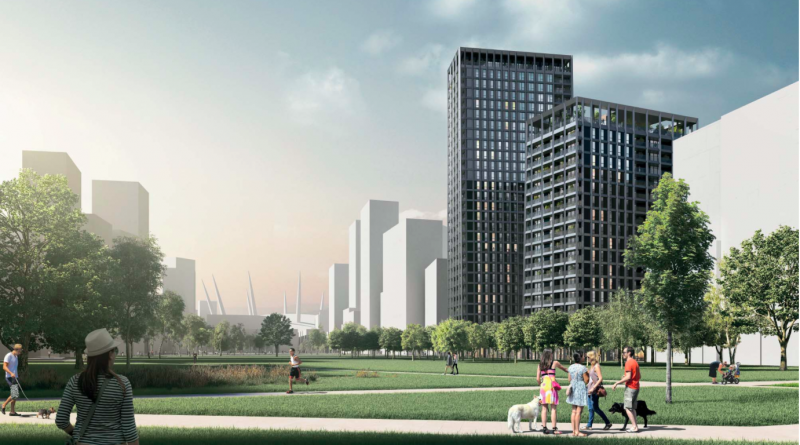 Levels of affordable housing across parts of the Greenwich Peninsula could reduce if Silvertown Tunnel sees any delays during construction.

The current target for “affordable” homes at plots owned by developer Knight Dragon is already below Greenwich Council’s 35 per cent target at 28 per cent, but an agreement between the authority and Knight Dragon allows that to reduce further to 25 per cent.

A Greenwich report states that: “Rolling Minimum of 28% is maintained as the site is developed with a fallback position drops to 25% in the event of delays to the Silvertown Tunnel.”

Three per cent may not perhaps sound much, but the overall masterplan is 17,487 homes. That’s 525 homes in total.

The report isn’t entirely clear on whether 28 per cent would ultimately be maintained when all homes are built (it suggests this in places) or whether 25 per cent would be permissible, with this snippet at the end: 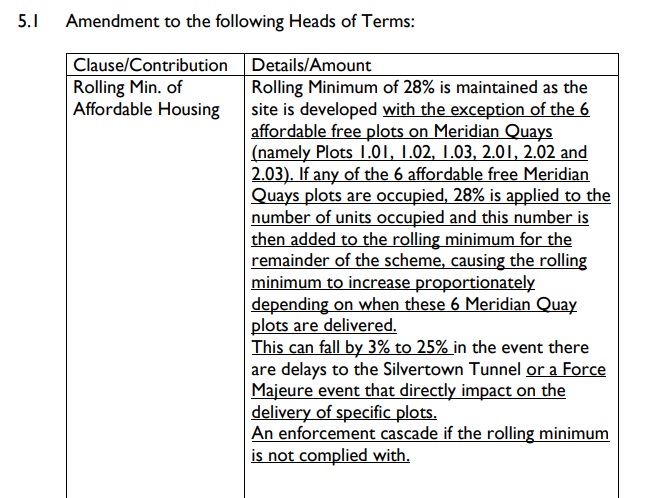 Even if 28 per cent is still the ultimate goal, permitting a reduction in affordable housing will have a big impact with homelessness and households in emergency housing growing rapidly in recent years.

That deal was agreed in November 2020 and though I’ve read a a number of reports since on new housing in the borough, I havn’t noticed that clause before.

The new tunnel takes up a large expanse of land on the Peninsula and already reduces the number of potential units by around 400 homes.

Supporters state a new tunnel is needed for that new housing, though on the flip side, opponents argue additional investment in public transport could cater to new residents.

One such scheme would have been upgraded frequency and new trains for the Jubilee Line. Mayor Sadiq Khan scrapped a planned order for more trains.

Another was a rapid transit on the drawing board for decades from Abbey Wood to north Greenwich.

Boris Johnson scrapped that in 2009 when Mayor, and recently it has remerged though numerous developments have been approved along the planned route, yet no money from has been allocated for it from Section 106 agreements.

That includes 1,750 homes at Thamesmead Gateway, which also saw cuts to planned transport changes and almost no money to improve pedestrian links to Plumstead station.

Ditto the numerous plans in Woolwich town centre such as Spray Street.

The latest council reports only list the rapid transit as running from Thamesmead to Woolwich and no further, avoiding Charlton Riverside and north Greenwich.

Other ideas mooted in the past include a pedestrian and cycling bridge to Canary Wharf.

None of these projects are anywhere near approval or likely for some time – if at all.

Even the proposed bus station rebuild by Santiago Calatrava – announced to much fanfare – has been cancelled.

What has proceeded is new parking beside the Thames, and the new masterplan retains at least 2,000 parking spaces.

Another snippet in the report centres around the location of “affordable” homes on the Peninsula, with six blocks containing none at all:

“The exclusion of the 6 Meridian Quays plots (MQ) from affordable housing occupation restrictions would mean that the developer could build up to c. 3125 private units (based on the illustrative scheme) without providing any additional affordable housing.”

“The main difference between the current arrangement and the previous 2015 Masterplan is the ability to provide, at worst case scenario, an additional c.824 units without providing any additional affordable housing”.