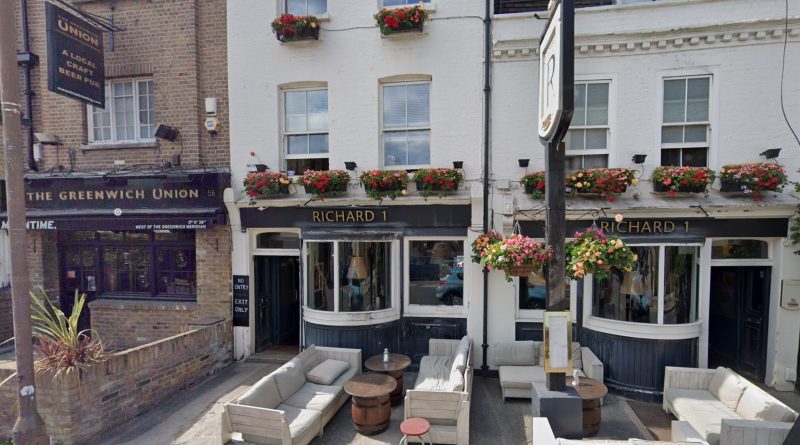 Plans are in to knock through two Greenwich pubs to create a single Young’s pub.

It was a matter of time before the plan was submitted given Young’s purchased the former Meantime Greenwich Union directly next door to their own Richard I pub on Royal Hill earlier this year.

Meantime have been selling off their local pubs since being sold in 2015, firstly to multinational SABMIller and then Japan’s Asahi in 2016.

They also vacated the Old Brewery site at the Naval College grounds which Young’s took over.

Two buildings comprising the current Richard I are Grade II listed. The former Greenwich Union pub is neither statutory or locally listed.

Two connecting areas can be seen in red hatching above.

Young’s planning application states: “The proposals are careful not to create openings within the historic interior of either building.”

“The main element of the proposal seeks listed building consent for the creation of two openings with the modern extension to Richard I to provide access through to the Greenwich Union side. The proposed locations for the openings are within what would have historically been the garden boundary wall to No.54”.

Young’s relentless march to take over various pubs continues. They own the former Greenwich Union, Richard I, Coach and Horses, Cutty Sark and the Old Brewery site. Recently they opened Enderby House.

With Young’s you know what you’ll get; a pretty middle of the road corporate look.

The current Richard I comprises two building. In 1923, much like the contemporary proposal, an adjacent building housing a confectioners was purchased.

For decades after, one half was an off license known as the Tolly while the other operated as a pub.

The application states: “The Richard I Public House at No.52-54 has informally been known as ‘The Tolly’ due to its history of selling Tolly Light Ale and there are also records of the public house being referred to as “Ye Old House” (circa 1908). Listings from 1896; however, do show “Richard I” at No.52 Royal Hill, indicating that this is in fact its historic and formal name.”

The application is dismissive of the Greenwich Union, stating: “No.56 Royal Hill is a more recent building, certainly of 20th Century and of limited architectural or historical integrity. It’s additional height is a little out of scale with the remainder of the terrace”.

Almost all internal fittings in number 56 look set to be removed including the bar. It was very cosy in the Union at times given the narrow width and position of the bar.

A shame then to lose a pub with character and offering something a bit different in Greenwich. Young’s pretty dull corporate look spreads yet further, though at least a number of other interesting pubs like the Pelton Arms remain in Greenwich.

One thought on “Two Greenwich pubs to be knocked together: Richard I and Greenwich Union plans in”