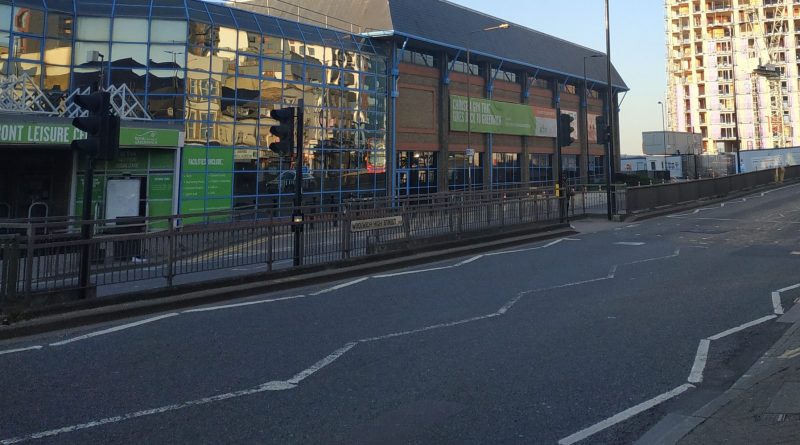 A new street layout in Woolwich in the midst of new developments is approaching completion – and manages to ignore cyclists using a busy road in the heart of the town. An application from Berkeley Homes covering an area of Woolwich High Street recently submitted (though drawn up in 2018) claims there is no scope for cycle lanes. Not a surprise really given previous submissions, but this latest application confirms no link on major roads between existing segregated cycle lanes to the east and planned dedicated lanes to the west.

The crazy thing is that it’s not too difficult to envisage recently completed work – and areas currently on the way to completion – being ripped up in a couple of years to improve cycling provision. Installing a lane now would reduce irritation, frustration and possible injuries in the near future. Lanes could have been installed without encroaching on road space if thought about at the outset. Current street work – including no lanes – is being funded by Berkeley Homes via Section 278 funds – which are similar to Section 106 funds which cover various areas of spending. S278 covers highways. Any future changes will fall onto taxpayers to fund.

Firstly, let’s look at a new section of road in the area. With forward thinking, removing the central reservation and barriers to the left would have created space for future lanes. Instead, recent work saw the previous central reservation dug up, then put another in at almost the same place while laying new tarmac on the road.

There’s not any sign of passive provision for future changes. It continues around the corner. Between two new developments there is no thought of active travel provision with newly installed streetlights placed on another reworked central reservation:

Installing new street lights in the middle makes it harder to alter the layout in coming years of course.

The area to the left in the image above was a clean slate, with new towers rising on a former car park yet no attempt will be made to create space for cyclists alongside the road. It’s almost as if authorities seek conflict between road users. If or when work is undertaken in future to alter the layout, drivers will complain about hold ups and many will blame cyclists. That could have been avoided.

They do however find space for lay-bys for vehicles, with building’s located so close to paving and the road that future options for a cycle lane are compromised:

Note those trees they intend to plant separating the lay-by from the road. Another thing that will hamper future changes.

Below we see the direct route in blue, and in red the route this application states cyclists should take:

Woolwich High Street does have a different in height to the west but it’s not beyond the realm of possibility to fix that. 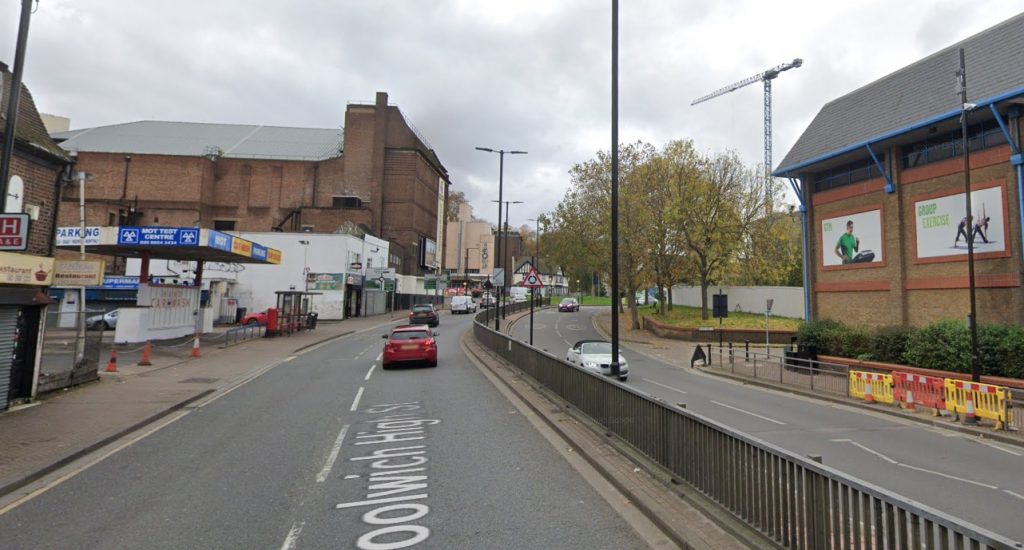 Lose the central reservation and barriers and there’s space for cycle lanes alongside structural work to level the surface. The waterfront is also to be demolished which opens up opportunities here. Berkeley state the waterfront being in third party hands is a reason not to act.

The above image is looking towards the Woolwich ferry roundabout where a dedicated cycle lane (formerly Cycle highway 4) from Greenwich is due to end. It’d also be useful to do something about the roundabout which is currently poor on foot and cycle:

This whole area is in the midst of mass development. There is money to improve the area from these developments, and given street alterations are already happening it would hardly increase costs substantially if foresight was used and alternate designs adopted. The application states Greenwich desired a cycle lane – at least on Beresford Street: “The provision of an on-carriageway cycle route along the A206 Beresford Street consistent with the Royal Borough of Greenwich’s Cycling Strategy has been raised by the Council as an aspiration for inclusion in the offsite highway works that are required to be submitted for S278 technical approval.”

Yet plans were approved without any provision for a cycle lane: “It should be noted that all planning applications promoted through the planning process and having received planning approval to date have done so without any indication that on-carriageways cycle lanes would be provided as part of the offsite highway works associated with this development.”

Since they made that statement in 2018, Greenwich Highways have made further changes to Beresford Street with no thought of future cycle lane provision.

These problems aren’t just something that happened a few years ago and lessons have been learnt. The same problems look like they could be repeated nearby. Another development just east looks like continuing the problem as no cycle lane is planned along Beresford Street:

It’s another site with practically a clean slate plus a wide road with central reservation, but little foresight apparent to create space for cycling in an application for 650 homes:

London is not an easy place to install cycle lanes with many narrow streets, so when space does exist it’s maddening to see opportunities not taken to create them. If you have wide central reservations and large plots of vacant land alongside that are to be developed, it’s inexcusable in many cases not to think ahead. All these developments boast of cycle spaces for residents, but then do little to make cycling beyond the front door safe. Local authorities compound the issue by doing little to push for lanes when it matters – often until years later when disruption ensues. That also ensures the cost is borne by taxpayers rather than the developer funding initial work via S278.

Head further east and we see yet another example of recent street work in the missing link section:

That central reservation was greenery including trees until about a year ago when dug up and the current hard-standing surface installed. If removing greenery work could at least assist with cycling space, but again the opportunity wasn’t taken. Missed opportunities like this continue to leave fractured cycling provision. The odd few hundred metres of safe lanes suddenly stopping does not make a network. It won’t get many people out of their cars. In many places it needn’t even remove road space and cause conflict.

Hop to east London and a four lane road with cycle provision can be seen below: No central medium or barriers.

Back to Woolwich, and towards Plumstead we reach an area near existing segregated lanes. This is where greenery was again removed for barriers in recent years. No one thought of cycling provision it appears – unless you count a bit of paint:

This is again a recent change though it looks straight out of the 1970s. Street lights placed in the middle make any future change harder and more expensive to implement. This is not attractive, this is not people-friendly design suitable for a town centre and nor is it financially sensible as mistakes are rectified shortly after completion. We’ve seen it three times alone in this area in the recent past – though the changes were often deeply flawed.

The planning application report concludes that no cycle lane is thus possible on Woolwich High Street – and reading between the lines it comes down to pretty much ‘we don’t want to spend the money’ and ‘we’ve already got approval for our tower near the road so too late now’.

In the end, both the authority and developer have made life difficult for better cycling facilities in this spot – and there’s signs they’ll do it again just to the east.