The pandemic has brought about many predictions of forever changed working and travel patterns – often from people comfortable enough to live in a sizable home where it’s a desirable thing to do.

But let’s assume for now that the majority of people working in offices do switch to home working for most of the week, will rail travel in urban areas see a steep decline over the next few years?

In terms of peak time commuting that may well be so, but it could be somewhat mitigated by an increase in off-peak travel.  There’s no shortage of homes rising around stations right  now across south east London at least. And most are car-free.

In recent months alone this site has covered work beginning in December on a 22-storey tower near Abbey Wood station, while work is finally nearing completion on the first homes at Thamesmead’s new homes.

Plumstead has seen 1,750 new homes approved at the end of 2020. This is a joint Peabody/Berkeley Homes development.

Woolwich continues to see many plans approved and proposed. In recent months the 22-floor Mast Quay tower has begun to appear near Woolwich ferry.

Woolwich Exchange is up for approval soon. Three large blocks will also complete on the Arsenal site in the next year. Two towers by the river:

And another block somewhat hidden from surrounding streets:

I’m generally not including plans yet to be approved as if I did we’d be here all day. There’s thousands more homes on the drawing board in Woolwich alone.

Further west and work is now underway to demolish Morris Walk estate. An extra 8,000 homes are lined up in Charlton. Granted, many are some way off.

One site in Charlton which isn’t is Victoria Way, with 330 homes now approaching completion.

Various plots on Greenwich Millennium Village are continuing. Links to Westcombe Park station – close as the crow flies – are so poor I’m not sure many will bother with it. The tube despite being further is more likely to appeal.

Then there’s Lewisham Central’s next phase which has now reached floor number four:

And then there is this 27-floor tower beside the station which has topped out: 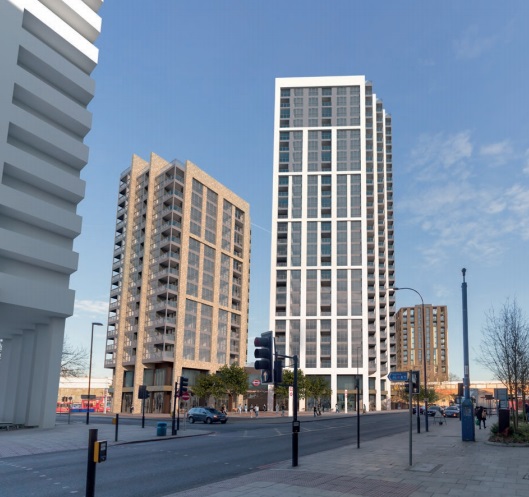 The vast majority of these developments have minimal parking and in close proximity to rail and DLR stations.

If we head to Kidbrooke work continues apace at two site – Berkeley Homes’ Kidbrooke Village with more towers now rising, and over the tracks work well underway at TfL’s plot:

There’s many more plans I could cover (Erith for example is set to see another 249 homes approved next week with many lacking any parking space – post coming soon) and the general point remains – many, many major developments are now well underway and this will see additional patronage of rail.

The danger is the Treasury enacts swinging cuts in coming months and years just as demand picks up – thereby chocking a recovery at source. Peak time could well take a long time to recover (though perhaps not as long as some claim) but taking an axe to off-peak travel would be a big own goal.

Not just for preventing congestion increases for those who have the option to drive, but for offering sustainable travel to people moving to new homes.