Peabody have still failed to sell all homes at a development named The Reach in Thamesmead around nine months after they completed last December.

The site saw the first – and only – homes so far completed by Peabody in Thamesmead after a large number of areas were designated as Housing Zones six years ago.

Just 66 homes have been built in Thamesmead since the promise of thousands of homes made to much fanfare in February 2015 by George Osborne, then-Mayor Boris Johnson and local councils. In 2015 Peabody announced plans for 3,000 new units. Progress since has been slow to put it mildly.

Perhaps it’s no surprise even the first homes are failing to sell given Peabody are asking £280,000 for a 1-bed flat in a location opposite a prison and beside a dual carriageway – with service charges on top. It’s a less than pleasant walk to the nearest railway station involving an underpass near Plumstead station. Nor is it an easy walk to Woolwich Crossrail – whenever that opens.

Local politicians were on hand to open the site in an official ceremony in January 2020:

On Saturday,we officially opened The Reach – our development in West #Thamesmead.As you can see it was a lovely day for our residents to be joined by @Royal_Greenwich Leader,@DanLThorpe;Mayor of Greenwich;Cllr Mick Hayes,and our Director;John Lewis as they got to know each other. pic.twitter.com/aOdEuqxrqS

At the time I covered the cost of homes on site. If £280,000 for a small 1-bed flat seemed a bit much there was of course shared-ownership on offer. Not much of an offer granted, given it cost £70,000 for a 25 per cent share with a “buyer” then needing to pay rent of £481 a month on top of their mortgage and a service charge each month of £157.

It’s now many moons since the Housing Zone back in 2014 announcement and what do we have? Not much with few homes built and even those beyond affordable for most. Yet this same model is one the current government continue to push. 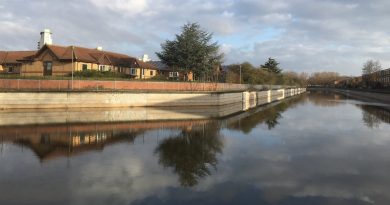