Posted by fromthemurkydepths on July 27, 2019 3 Comments 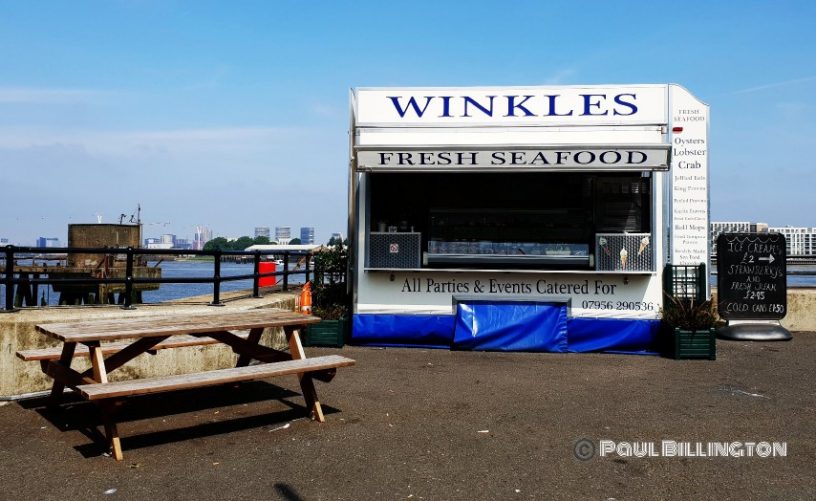 Apologies for the delay in putting up this guest post from Paul Billington post. Part one can be seen here and part two here. Enjoy! And thanks to Paul for this look into an ever changing riverside walk.

Predominately used as storage for aggregates for the manufacturer of road coating materials, it is able to offload to riverside receiving hopper, which is transferred via conveyors to stockpile bays.

Ah yes. Winkles, taken in 2016; a welcome sight, along the River and in a great spot. Get your fresh seafood at this stall opposite the Anchor and Hope Pub, looking resplendent in dark blue and white these days, well worth a visit; a cracking pub. The current building dates back to 1898 and is largely as it was when built.

A bit further down from the Anchor & Hope are further signs of the historical parts of industry that took part in this area. This is part of Durham Wharf, which still contains disused rail tracks which used to export the contents of coal and sand loaded up to the disused jetty, onto trains that used to run to these parts and joined up to the eastern part of the riverside railway sidings and that onto the mainline via the Angerstein Wharf section.

The riverside lines used extensively by the United Glass Bottle Works, but also served the old GA Harveys site connected up to Angerstein Wharf. These are the last remains of the extensive sidings in the area. The wharf was last used by Cory’s – who remain next door – in the 1970’s.

I took this in 2016. At the time, it reminded me so much of one of those greeting cards with those grey bears on the front, the wooden surrounded even matched the bear like a piece of art. It was protected from the elements, thankfully. I didn’t rescue it….

The very active industrial part of the Thames Path in Charlton comes just north of Riverside where the Aggregate Industries site, which includes Tarmac’s additional plant and CEMEX Angerstein Aggregates Wharf. It is a large site, dusty and dry – so be warned – but it is fascinating to see the container ships taking on or releasing its cargo along the expansive conveyor belt that extends towards the river. The noise is amazing, working river life at its finest. The top picture was taken in 2016 and the lower one in May 2019.