One of the biggest bugbears of this site – and one of the original motivations behind its creation – is poor street design in many places across Greenwich borough which particularly hampers vulnerable people trying to get around.

It was moving back to Greenwich borough after almost a decade away living in various places that alerted me to widespread bad street design endemic across Greenwich borough. Much was rooted in decades-old thinking where the car was king and pedestrians an inconvenience to be blocked off, penned in and diverted around traffic. No area or authority is immune but the scale of it in this area of SE London was extremely high.

That led on to more research and discovering just how poor they have been at enforcing against bad parking for example (with a £12million budget shortfall) – and how cluttering up streets with endless street furniture at high cost is no real alternative or solution.

Around £130k was spent in a couple of years on thousands of wooden bollards stuck up pretty much at random. It didn’t work as little to no enforcement.

Anyway, the council have now determined to use £75,000 of Local Implementation Plan funding next year given from TfL on improving design knowledge among staff and departments.

What’s interesting is that this money is from a TfL fund – and yet TfL already provide a comprehensive street design guidance manual – which Greenwich often ignore by adhering to dated design principles. A dogged reliance on guardrail for instance – even when research shows removing in some places can lower casualty rates.

There’s also documents on cycle design and others areas of public realm management from TfL in a “Streets Toolkit”. So why develop more guidance?

It’s somewhat of a shame £75k couldn’t be used to audit and remove or relocate  existing street furniture and clutter.

Many design problems are down to little attention to detail and common sense. Who thought sticking the pole directly in the middle of the pavement here (which predates the grit box) was a good idea for example?

There’s so, so many examples. More spring up than are removed. Maybe the £75,000 will advance thinking on small scale work and major schemes – but should it be needed when the guidance is already there?

This certainly needs attention – and it’s a shame its taken so long. Cycling numbers in the borough are stagnant at best and falling behind targets whilst road collision rates rose sharply last year (though changes in methodology play a part).

The extended Thames Path is a great scheme but very much an exception to the rule.

I may launch a mini series of posts (time permitting) on examples of good and poor design and street changes which either hinder or help pedestrians. 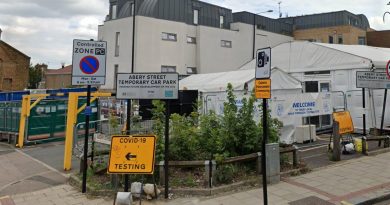