The number of households in temporary accommodation rose from 740 in Q1 to 909 in Q2. Not only is this distressing for those placed in B&Bs but it costs taxpayers huge amounts.

As seen, the number of households accepted as homeless rose from 123 to 287. And this applies to households – many single people will receive little help and end up on the streets.

Council staff are bracing themselves for a further jump in numbers after universal Credit was introduced in the borough at the end of 2018.

Whilst this was happening the council were controversially attempting to push through sell-offs of public land at three sites to Pocket Living for private micro flats.

It has now been halted on two out of three plots – but land at Charlton Heights is still due to be sold.

The council argue income would be invested in new social homes – but opponents argue that is time consuming when need is immediate and Greenwich would gain better value and speed up the process of providing needed homes by building directly on council land.

It is now revealed they are looking into modular building but sites are not known. Lewisham Council have done so in Ladywell and are now planning the same in Deptford. 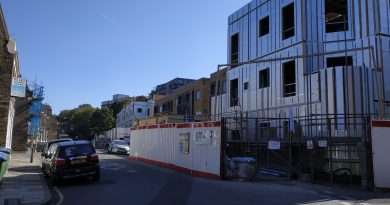