Recent figures out show steady passenger numbers on the Eltham line in the year to January 2017. Seven out of nine stations between Lewisham and Dartford recorded growth. The two falls were at Eltham and Barnehurst. 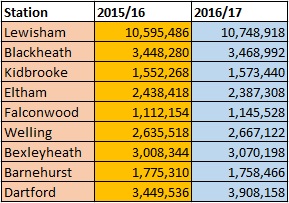 These are decent numbers given the regular weekend closures of the line during this period often because London terminals were closed due to London Bridge rebuilding work.

The line wasn’t as badly hit as the Greenwich and Woolwich lines, which also had Crossrail work and large service reductions from Westcombe Park to Deptford.

In a little over three weeks the bulk of London Bridge rebuilding work completes. All nine through-platforms will be completed (with some reserved for Thameslink) and the concourse below and tube links almost finished.

Trains for Cannon Street will once again be able to stop and three years of disruption will be almost over. However, Southeastern services do not return to normal until May 2018. The proposed timetable for May 2018 was covered here.

Any help you can give in paying for costs to run the site would be much appreciated. You can help out here.