Things don’t seem to be going too well since service changes a couple of weeks ago. Not only have the number of services been cut by 40% from 5 – 7pm running to Greenwich and 30% to Deptford, Maze Hill and Westcombe Park, but Southeastern have cut train lengths to just six carriages on many services.

Coupled with the 40% cuts in the numbers of trains, the reduction in lengths of those remaining mean a total capacity cut of 50-60%. 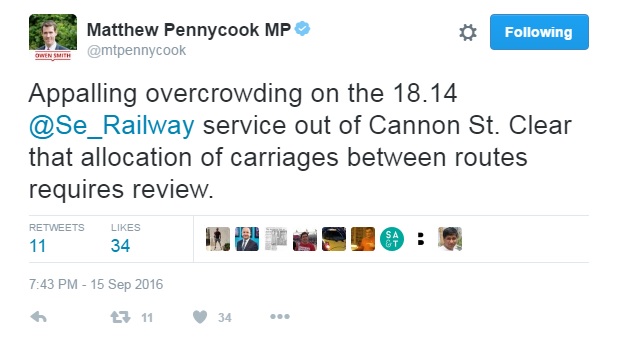 Here’s a table I produced back in July showing the service reduction. 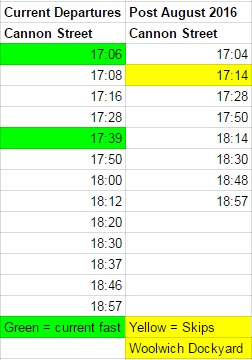 Southeastern planners were hoping many Cannon Street passengers would head to Charing Cross, Waterloo East or London Bridge so longer trains run through there. Maybe they will in time. But in an unfortunate case of timing, the tube connection to the station at Charing Cross, which Southeastern hope many will use, is to close today (26th September 2016) until July 2017.

I’m not sure if Southeastern really thought a 50-60% cut in capacity in the evening peak was feasible. If they did they just aren’t looking at rising population and house building. But then surely their own station figures should help.

Deptford’s growth, for example, is very strong and the tower block and retail development right next to the station completes right about now. Many of the new shops and bars in the arches are currently being opened.

It’s likely that if Transport for London operated Southeastern trains there would be better co-ordination to avoid these issues. And if they had been awarded the franchise in 2014, when Southeastern were given an extension, they would likely have secured more trains by now to mitigate the effects.

Or at least altered the interiors to accommodate more passengers. The DfT didn’t ask and no franchised operator is going to splash out as they’d never recoup their investment over two years.

Many still seem under the misapprehension that Southeastern own the trains and can order more. They are owned by train leasing companies, and will only be able to secure more if the Department for Transport agrees.

There also seems a disconnect in transport planning and transport capacity which needs looking at.

Anyone travelling the line can see the thousands of homes now completing or underway. Just look at how it looks when crossing the Creek. I wrote about it here and here.

Here’s a brief list of developments completing soon along that stretch:

4 thoughts on “Looking at the 40% train cuts to Greenwich, plus Charing Cross tube link shuts”