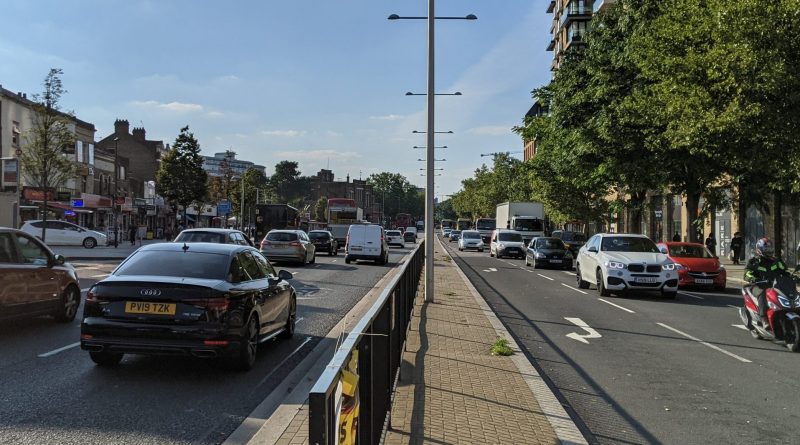 The number of cars registered in Greenwich borough continues to grow with figures showing that in 2020 the total reached 79,091 – an increase of almost 7,000 in a decade.

The figures aren’t new (published in 2021) and I stumbled upon them while looking into Lewisham Council’s Transport Strategy which is due to be discussed tomorrow.

Greenwich numbers though paint a revealing picture and are worth highlighting given controversy over congestion, cycle lanes, Low Traffic Neighbourhoods and Silvertown Tunnel.

Cars registered in the borough saw barely any change from 2010 to 2013 at around 72k. Then increases begun, with around a thousand extra cars on the road each year until figures broke through 79k in 2020.

The increase in Greenwich surpassed neighbouring boroughs. Lewisham saw an increase from 73k to 77k between 2010 and 2020.

It’s hard to see any imminent reversal of this trend given Greenwich Council have continued to permit extensive car parking in developments – or refused to enact parking schemes in areas where hundreds of homes are planned.

In recent weeks alone I’ve looked at future phases of Greenwich Millennium Village, where over 200 car parking spaces are planned.

A major Woolwich estate redevelopment also springs to mind. Morris Walk estate rebuild will see a substantial increase in homes – and when approved Greenwich refused to install a controlled parking zone in the wider area. It doesn’t take a genius to work out what will happen – even if parking in the development itself is restricted.

That’s the same estate where the authority opted not to spend any sizable sums to improve pedestrian links to bus routes, leaving a narrow, dingy underpass as one of the main routes.

One phase will see 144 spaces for 302 homes. The transport plan stated “no overspill is expected to occur onto the surrounding streets. It has been noted that opportunities for overspill parking are very limited in any event and it is unlikely that residents would seek to park on-street”. Really? There’s a number of roads with no restrictions nearby. Residents will park there.

They did the same in November 2021 in Thamesmead. A development from Fairview Homes will see 129 homes, while improved pedestrian links to nearby Plumstead station was ignored. TfL advice on improved public realm including pedestrian crossings was ignored.

Advice to Greenwich’s Planning Department during the application period stated: “The applicant anticipates that residents will utilise Plumstead Station for National Rail services.

However, the walking and cycling environment from this site to the station is poor and could deter the use of this mode.

A contribution to improve the walking and cycling environment and make the station easily accessible, particularly noting the highspeed traffic at Pettman Crescent and the A206, should be secured in line with Policy T4.”

Greenwich’s response? To completely ignore it and refer to a token spend in the opposite direction to the nearest station.

Then we have ever rising public transport fares. This week we’ve seen announcement of TfL fares rising by over six per cent on buses and the annual rail fare increase will be implemented. Southeastern have long been adding inflation-busting increases even since a 2006 award stipulated RPI+3 per cent each year. Both increases heavily due to decisions from the Department for Transport alongside the Treasury.

With that background it’s hardly surprising more cars are registered in the area. Both central government and some areas of local government encourage it – and that doesn’t look like changing soon. Crossrail is opening on 24 May

8 thoughts on “Registered cars in Greenwich borough rise by 7,000 in a decade”