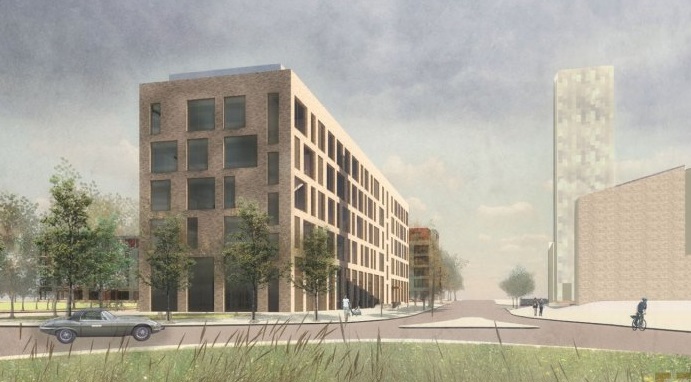 Hundreds more homes were approved at plots in Greenwich Millennium Village last night as councillors failed to raise a number of issues.

Poor pedestrian links to local shops in Charlton were barely mentioned despite the council continually issuing reports on green issues and encouraging people to travel sustainably. Peartree Way lacks a crossing beside a high speed roundabout and needs to be crossed to reach amenities. I suppose the fact the council’s report even spelt the road name incorrectly offers an insight into knowledge of this spot.

Not one councillor raised the issue of pedestrian links and encouraging sustainable transport. Bear in mind this is the route many new occupants need to take in order to reach shops in Charlton such as Primark, Aldi, Asda, Argos, Sainsbury’s and Marks and Spencer to name but a few. All five minutes away but much better to jump in a car as things stand.

Perhaps they think a meandering route via all arms of the roundabout and an additional long detour will suffice. That contravenes decades of experience and research into pedestrian behaviour.

Or because there’s small commercial space in the site no one will want to visit the numerous national retailers nearby? Whatever they may or may not think, to ignore the issue is bizarre but all too common with Greenwich Council planning officers and the planning board.

Concerns by the NHS over inadequate funding during consultation were also not addressed. While total funding from developers to Greenwich Council via Section 106 was set back in 2012 (the development has moved so slowly that the Community Infrastructure Levy was not yet in place), how that money is split can change over time and cover a wide area including health, transport, education and more.

As is common in the borough, reports on how Section 106 has so far been spent and just where the next tranche will be allocated is lacking. Comparing reports and meetings to other London authorities is revealing once again, with far less transparency over how millions have and will be spent.

Bear in mind Greenwich Millennium Village was originally built – and is still heralded – as a flagship green development. You’d not know by a complete failure to address integration into existing amenities and communities, and how residents can access them. Is this a case of the authority again thinking green only extends to buildings rather than the entire area including streets and public space?

Affordable housing levels are low at just 20 per cent. Former council leader Cllr Denise Hyland (Abbey Wood – Labour) at one point asked what the total levels were. If she’d read reports for the meeting (or this site) she would have known that the council agreed 20 per cent back in 2012. She then asked whether is only liable for Section 106 and when told it was, failed to ask where or how it’s spent, or total income levels.

Questions were also asked as to why all “affordable” homes are in one block. The developer stated that the owner of affordable homes prefers them all in a single block. When it came to decide and vote, Hyland said she understood the need for all “affordable” homes in one block to avoid high service charges. This is despite their being no social housing, but the more expensive London Affordable Rent and shared ownership – which as we’ve seen lately does not prevent high service charges.

Planning Board chair Cllr Stephen Brain (Labour – Peninsula) represents the ward where these homes are to be built. He did raise the issue of affordable housing but not Section 106 income, how it’s been spent and will in future, a lack of information on the subject nor the issue of local streetspace and links to existing communities and amenities.

Of eight councillors present while GMV was being discussed, only four spoke with four not raising any issues, including the sole Conservative (Geoffrey Brighty – Blackheath Westcombe).

One moment around the 22 minute mark sort of sums up the meeting, as Hyland asked about the possibility of someone throwing things from a window (at a separate development in Greenwich) and could the applicant look to mitigate after a member of the public questioned whether windows above a parking space was a risk. Planning Board chair Stephen Brain appeared taken aback and bemused by the suggestion. The respondent from the developer also saw him stifle his bemusement. He’s diplomatic in response but is clearly baffled.

So what is the suggestion here? On the off chance someone decides to throw something from a window sometime in the future a grill over every window? No windows?  In theory other developments could see similar and perhaps we should just block all windows near parking spaces? Maybe retrofit all homes or ring the window tax back under a new guise?

Who knows, someone may walk out the front door one day and have a bird shat on their head. Better have no doors. You can’t hamper the living quality of many people for a car parking space.

Silly issues raised and important points ignored in an hour of not great viewing.  Click here to view the meeting.