Plans have been submitted by Greenwich Council to move a Woolwich Community Centre and nursery into refurbished adjacent buildings.

The refurbished building formerly operated as a nursery but has been disused for some time.

Extensions and reworking will increase the size of buildings beside Leslie Smith Square leaving the existing centre empty.

The current square alongside the new community centre site is, to be polite, not very good. One side has an inactive frontage due to disuse and the place is car dominated.

There’s no trees, no greenery and its pretty bleak. The only investment for a decade is – what else – a wooden bollard. It does nothing against poor parking.

A welcome aspect to these plans is removing the inactive frontage through rebuilding which will open up the front, though there’s little sign of overall improvements in the square outside which operates as a focal point for the estate.

Locals have raised concerns about parking with new buildings and events held on site. It’s the same issue from Greenwich Council – a near complete lack of enforcement and subsequent extensive parking on pavements and over dropped kerbs.  The authority compound the issue with random street clutter achieving little except to further hamper pedestrians.

Replies to concerns pretty much brush the issues off.

The new community centre would “consist of two 125m2 halls which would each cater for 80 sitting / 140 standing spaces at peak capacity.”

The transport statement lists travel times from, err, Uckfield station to the centre for some reason instead of Woolwich Arsenal. That may be a typo, but it also claims five trains an hour to Luton – which is completely wrong, as is just about everything here:

With it getting rail figures so wrong, can we have much faith in an assertion that the impact of a centre for up to 280 people “will be relatively low and accommodated for by Leslie Smith Square car park or the un-restricted parking in the surrounding neighbourhood”. Yep, the same area where parking is all over pavements as it is.

An issue to keep an eye on is what happens to vacated buildings currently occupied by the community centre. New homes? 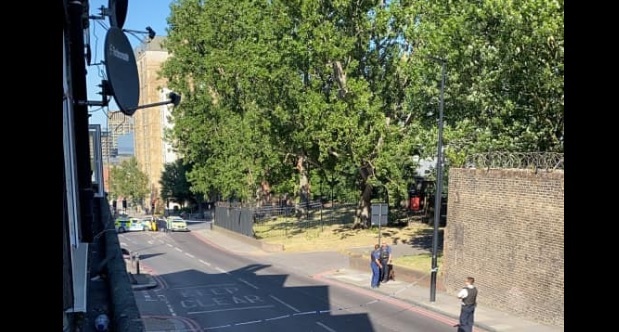 4 thoughts on “Woolwich Community Centre to move into disused building”