Transport for London have today uploaded details offering an insight into how a drastic fall in passenger numbers decimated funding bringing the service within hours of near collapse – and could do so again.

As corona swept the the world in January and February many in UK government were asleep at the wheel. According to TfL, central Government were predicting passenger numbers would “only” fall by 30 per cent. They ended up going down 90 per cent.

If it was 30 per cent TfL may have been able to ride it out given the managed to reduce operating deficit from nearly £900 million a year in 2015/16 to £200 million last year.

They managed that despite a £700 million a year cut from central Government funding under George Osborne. It also occurred despite a decision from Whitehall that all vehicle excise duty from London drivers should now be spent outside the capital with no funding for TfL managed roads.

But the sheer scale of income reduction after March rendered a collapse near certain. By law, a Section 114 notice would have needed to be enacted which would have seen vast cuts across all forms of transport. To avoid that, a bail out from central Government was essential, though much is in the form of loans that need repaying and with only enough funding to last until October this year.

Board papers also highlight a contrast to other major cities across the world. It shows how London is unusual in that it receives very little support for operating costs and is reliant on fare income to a far greater degree. That renders the capital at major risk such as those recently seen – and also explains why fares are generally higher than much of the world. Other countries tend to see public transport as a social good and subsidise networks to provide low fares. Not so in the UK.

Rather than external subsidy from central Government TfL use their own income from the tube to subsidise roads and drivers. A situation unique in the world. The tube was bringing in almost £1 billion a year in surplus before March: 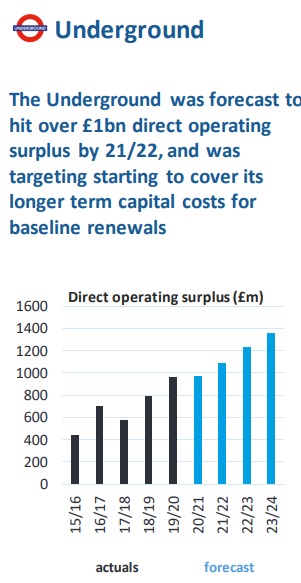 Buses are loss-making, so internal subsidy from the tube not only went to roads but was also used on the bus network – though bus cuts have been ongoing in recent years.

Cost pressures resulted in TfL having to suspend routine maintenance on roads and instead adopt a reactionary policy when things went wrong.

The board papers reveal that £100 million in tube maintenance will also be deferred this year. TfL state that Network Rail have brought forward projects while passenger numbers are low. TfL cannot do so – which means these projects will be deferred and carried out just as passenger numbers increase. Not great for future budgets and fare income. Also not ideal for employment right now.

One way TfL have plugged the funding gap in part is through retaining business rates – though of course the current situation makes that an unreliable source of funding.

This reveals another issue somewhat unique to London – devolution or lack of it. In most parts of the world local political leaders have far more scope to raise local taxes to support local services. Not so in London. It’s even less in other English cities.

Whereas leaders in other major cities can use, say, tourist taxes applied to hotel and Airbnb stays for income to support local services, leaders across England cannot do so. In 2016 Camden Council sought to charge £1 a night on tourist stays to assist with street cleaning – but they needed central Government approval. It didn’t happen.

Many world cities do permit local leaders to use such powers including Paris, Berlin, Amsterdam, Madrid, New York, Boston and many others. It’s often minimal sums, appears to have little to no impact on tourist numbers and sees local people benefit from tourist pressures on transport networks.

Of course, not much use right now but could help London in coming years – but only if Whitehall agrees.

A number of projects are being placed on the back burner and will need external funding including:

What about Crossrail and Silvertown?

These two aren’t going to impact too greatly upon operating funds in the near future and are more related to capital costs. Silvertown could well suck up staffing time and costs alongside disruption to buses but that has not fed through yet to any great degree on the operational side of the budget.

The latest Crossrail delay is also not going to help though it was envisaged that it would take some time to bring in money on the operational side – so right now the cost on that side of the budget isn’t too big a factor.

The past comes back to bite

What this report again highlights is the long-standing policy under all parties for 30 years to move funding for public transport away from general taxation and the belief it serves a public good. Operational support can help keep fares low. This is the same for rail as it is for TfL. It leaves transport at the mercy of collapse when unexpected events occur – as we now see.

So far there’s little sign the Department for Transport or Treasury seek to reform that model – which few other nations follow. What it is being used for is a handy stick for certain politicians to bash others with. The Conservative candidate for London Mayor Shaun Bailey is claiming Sadiq Khan caused the collapse of TfL – which we will no doubt see for many more months to come. Yet the numbers do not add up. It’s central Government policy leading to a heavy reliance on fare income combined with a pandemic causing 90 per cent falls in passenger income that led to the system being where it is.

Their are perhaps valid criticisms of Khan and funds – but the costs are a very small fraction of the overall loss of income seen since March. It was vast.

As things stand TfL will need another bail out in the autumn. Without any change from central Government road traffic will grow quickly in coming months and public transport will flounder. That may help their Mayoral candidate but would cause an even greater economic shock to the capital. What interest will they put first? 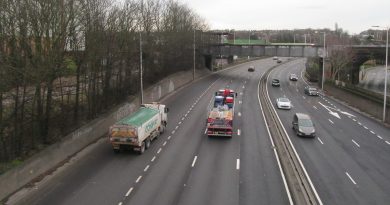 3 thoughts on “How TfL funding has been decimated: A look at the numbers”