A large police operation was launched overnight as the Thistlebrook site in Abbey Wood was raised by dozens of police. Four men were arrested for attempted murder.

Reports over a wide area reported the sound of “explosions” which appear to be stun grenades.

“In the early hours of, Wednesday, 8 April, officers arrested four men following a series of raids across Greenwich, targeting those believed to be in possession of firearms, drugs and associated with serious crime.

The arrests are the culmination of a long running proactive investigation launched following the attempted murder of a 33-year-old man on Sunday, 29 December, 2019 in Throwley Close, SE2 and reports of violent offending, including firearms offences, in the local area over the last six months.

Officers from Greenwich, within South East Command, executed six warrants at a site in Abbey Wood, SE2 and a further two at addresses in Combwell Crescent, SE2 and West Parkside, SE10. Officers from the Specialist Firearms Command and Territorial Support Group [TSG] assisted with the specialist method of entry equipment and skills.

Four males were arrested on suspicion of attempted murder.”

The incident in December was covered on this site. At the time witnesses reported seeing police covered in blood. 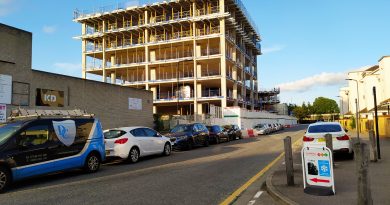