Peabody have announced an agreement with Lendlease to build 11,500 homes in Thamesmead. This is about the third time they’ve put out press releases on this site in recent years.

The joint venture is 50-50 between Peabody and Lendlease with no confirmation on affordable homes – let alone social. They state “our priority is affordable housing and planning policy at present is for at least 35% affordable”.

They’ve also again highlighted a need for the DLR before very much happens. With the news about Silvertown Tunnel the timing here is interesting. It could be a nice bit of distraction as TfL push ahead with the road tunnel to say “look, public transport options are coming too for south east London!” despite the fact absolutely nothing is confirmed or funded.

That’s the cynical view and I doubt an uncosted, unconfirmed and unfunded scheme will alleviate opposition to a road tunnel.

The other view is perhaps a bit of pleading by Peabody as any DLR extension is miles off? Given schemes like the Bakerloo Line extension have been on the drawing board for decades and are still unfunded, what hope for the DLR?

Either way, proponents of the road tunnel can’t point to the DLR as a sop.

Given this is Peabody nothing will happen very quickly. Since taking over Gallions Housing Association in July 2013 they’ve built a grand total of 66 homes at The Reach opposite Belmarsh. That’s it. And they had acres of already demolished land to get moving on.

My own opinion of the DLR is it’d be nice but still a slow way for many in Thamesmead to reach central London given it will cross the river and meander around quiet areas like Beckton before trundling to Canning Town. Crossrail buster it ain’t.

It’d still be quicker from Thamesmead to get a bus and Crossrail from Abbey Wood when that opens. If the DLR doesn’t interchange with Crossrail at Abbey Wood it’s a big missed opportunity, but even if not the bus and train wins on speed for most journeys across London.

The other option which appears to have died a death is London Overground. A London Overground extension to Thamesmead would have decent options and interchanges north of the Thames that Crossrail and Southeastern from Abbey Wood can’t provide, such as c2c trains to east London and Essex, London Overground orbital lines all over east, north and west London plus the District and Hammersmith & City tube lines. Quite some choice compared to the DLR.

What the DLR does have is scope for more stations. 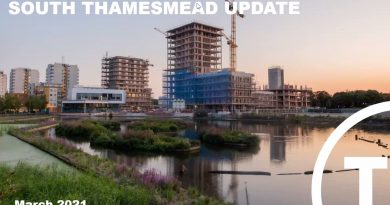 Has a DLR extension to Thamesmead just been confirmed?

One thought on “Peabody again call for the DLR to Thamesmead”