Campaign group Speak Out Woolwich has raised over £2,000 in 24 hours with the group aiming to be represented at a November planning inquiry for a tower and blocks around Woolwich Tesco.

“CROWD FUNDING UPDATE – WE HAVE RAISED OVER £2000 IN JUST 24 HOURS. THANK YOU! EVERY LITTLE HELPS!

We have had 53 contributions to date averaging nearly £40 each. Our largest personal contribution from a member of Woolwich and District Antiquarian Society was a whopping £400!

This will pay for much needed legal advice on aspects of our case. We now need to reach our overall target of £8400 asap so that we can be fully represented by a barrister at the 6 day hearing.

All contributions small and large will help us reach our target so that we can make sure the community is best represented.”

A page has been set up to donate here.

Tesco originally planned a tower on site back in the late 2000s. After financial problems for the supermarket giant they sold sites earmarked for housing in Woolwich, Lewisham and Dartford to Meyer Homes.

Greenwich Council rejected plans from Meyer in 2018 though they had given outline permission for a tower a decade before when Tesco owned the land.

An appeal will be heard in late November into Meyer Homes’ proposals for the tower and blocks to the rear which comprises 804 flats. While the tower has raised much publicity its the blocks to the rear that appear to offer many issues with homes densely packed in slab blocks.

Not only was outline permission granted for a tower in the late 2000s but a masterplan for the site was binned by Greenwich in 2017/18 after spending £124,054 and going out to public consultation. That SPD was to have capped heights on the land as this screenshot from consultation documents show:

Ditching the masterplan before adoption will remove legal protection and weaken any case during the appeal. The outline permission from a decade earlier may also play well for the developer as a precedent has been shown. 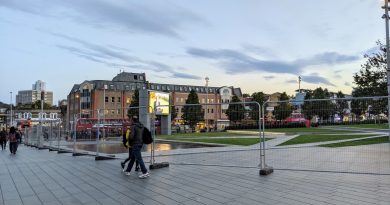