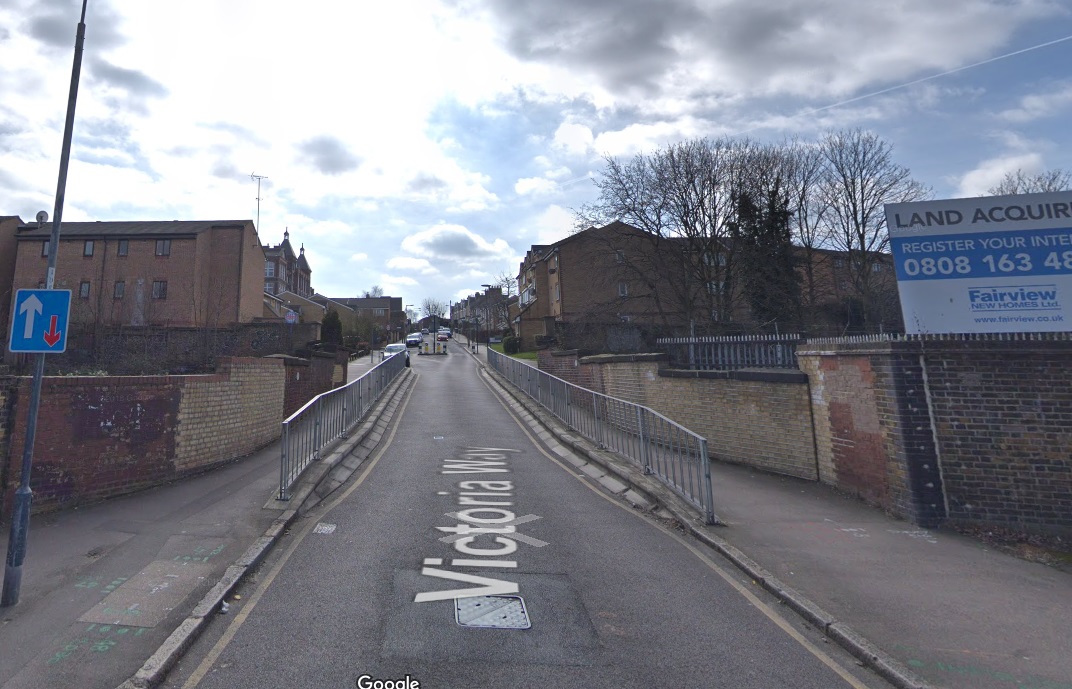 After my last post about Greenwich Council spending £75,000 on guidance for street design I said I’d highlight some examples. Here’s one – and it was a comment by Darryl of 853 fame on one of my old posts that alerted me whilst researching the last article.

In both boroughs we are looking at a street over a railway line yet a very different  approach to design has been taken. Back in 2012 Victoria Way in Charlton looked like this:

Then much money was spent adding guardrail which obscures pedestrians crossing beyond:

The safety argument will be that pedestrians won’t now cross here – yet they still will beyond the end of railings where visibility is reduced on approach for drivers. And as shown time and again guardrailing (and obscured visibility) often leads to higher speeds.

It also now looks cluttered and unsightly. So, ugly and unsafe. Good work. They’ve even retained parking at the end of railings further hampering visibility.

And look at the peeling paint on lampposts and general air of neglect even *after* tens of thousands spent on unnecessary work. It’s why so much of the borough appears run down. Money is there and is spent – but in odd ways.

Over in Lewisham the opposite happened. Back in 2012 a street over a railway line in Hither Green looked like this:

Guardrailing is in evidence – though the street is wider so visibility not as poor as in Charlton though car parking didn’t help. Note even little things such as guardrail being painted which helps with the attractiveness of the area. It shows a bit of care and love for an area:

Fast forward to 2018 and railings are gone. High kerbs still protect cars from heading onto paving and are a disincentive to pedestrians crossing. Visibility is good:

Even the bollards are better than wooden types favoured by Greenwich which whether quickly and get knocked out of shape easily.

This is not to say Lewisham borough are better across the board with street design. There’s variation between major schemes and smaller jobs – and whether borough councils or external agencies took the lead – but with smaller projects Greenwich Council could learn much.

Whether £75,000 needs spending drawing up guidelines when they already exist from TfL is another matter. Have a word with the neighbours perhaps?