The Green Paper is poor. It does little to address how to increase public building or announce any funding streams in future. More on that in a bit.

Yet many of the flawed policies of Government around housing in recent years have been copied almost wholesale by Greenwich Council, who have fuelled demand rather than supply by:

Research by the GMB union showed Greenwich’s total number of social homes was just 8% in 2016/17.

Centre for London research recently showed Greenwich as one of the worst London Labour councils for using development companies to build new homes , both on absolute numbers (16th of 19) and even worse in comparison to need: 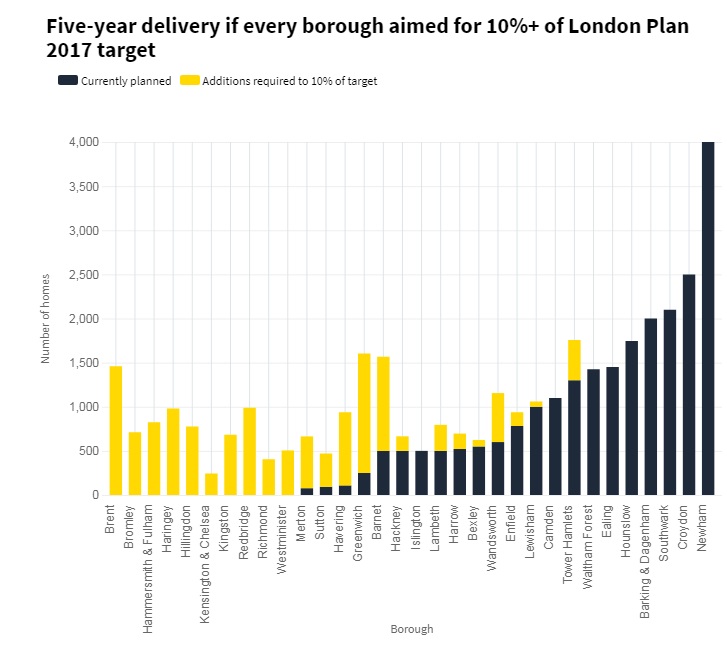 The statement released today called for more public building. And rightfully so. We are only going to solve the housing crises with local authorities taking a key role.

It isn’t some far left statement to suggest that. For much of the 20th Century both Labour and Tory built social housing (or council housing in the old parlance) on a mass scale.

After World War II, with Britain in heavy austerity, the Government of Churchill and MacMillan from 1950 increased public public rapidly. Tory and Labour Governments did so until the 80s. Then both parties put a halt and said the private sector and Housing Associations would meet need. They never have.

The old adage of a week being a long time in politics holds true now more than ever. And so who knows when a Government amenable to public building will be in place. Four years? 10?

And so waiting for that possibility instead of using Meridian Home Start condemns many to poor quality insecure housing.

It’s all well and good to lobby for more powers and funding for local authorities but when an opportunity such as Meridian exists, use it. It’s not perfect (it could do with more transparency) but right now there’s little else. Certainly not tiny flats at expensive prices as Pocket Living provide.

The press release today mentions a new Housing Board for Greenwich Borough. It’s eagerly awaited. It is mentioned in the same breath as direct public building though, and as said that could be years off. So if that’s the only game in town it possibly won’t achieve much.

It will look to build on underused sites but will it be low rise as previously seen which make barely a dent in demand?

It’s good to see underused sites mentioned given a strategy for former garages across the borough is over two years late, as is the Site Allocations Strategy which determines the type of development on areas of land.

Here was the timetable. It hasn’t yet reached stage two of five.

The delays all conspire to slow down new homes at a time of desperate need.

Despite a Housing Board set up coming soon, it’s no reason to proceed with Pocket Living sell off of public land.

Every single possible avenue for truly affordable homes and sites is needed, as homeless figures for lone parents show:

For two parents with children it is:

For those without children it’s often homelessness.

It’d make sense to stop mistakes now in progress, adopt a Housing Strategy that uses every tool currently open until central government changes policy, whenever that may be, and only then will the problem begin to be addressed.

2 thoughts on “Greenwich leader criticises government on social housing – but what about locally?”