After recent planning revelations with Greenwich’s Planning Department comes another story that appears to highlight deficiencies in Greenwich Council departments.

Plans are in for the upper floors of 68 Plumstead High Street to be converted into four flats. The applications states they’ve been used as flats for over four years without permission, and as its been at least four years the applicant is now going for automatic permission. How was this not picked up? Have they not been paying council taxes? Didn’t excessive rubbish levels get noticed?

The building currently has no signage and weeds growing out the top. Here’s an older shot when signage existed – its the “Silky Touch” unit:

It’s another poorly maintained building on Plumstead High Street. Google Streetview goes back to 2008 when it was just as much of a mess – long before cuts hit local government. Greenwich Council will probably want to blame cuts again though they’ve been insulated to some degree through income such as the New Homes Bonus which has brought in over £40 million since 2011.

Alongside the New Homes Bonus, another source of revenue Greenwich Council could have used long before now was licensing all private landlords in the borough and using revenue to hire staff to inspect buildings. That’s what Newham Council did over the river way back in January 2013, to give just one example.

The government tightened rules around licensing in 2015 but still allow up to 20% of private rentals to be regulated in the worst hit areas without needing approval from central government. Again, Greenwich Council have not done this. They havn’t even consulted on it. Even Tory Bexley have done that.

What Greenwich Council have belatedly done is announce they will regulate private rentals which are Homes of Multiple Occupation. Of all the options open to them over the past decade this is one of the weakest, and much revenue has been lost which would have ensured higher standards.

Incidentally, I passed 64 Plumstead High Street again and despite some new wood in three windows, two windows lack this and had pigeons on the window sill in front.

The application to renovate the building has been granted, yet similar permission was granted around a decade ago with no work every happening on the front. A search for 64 Plumstead High Street on the Greenwich Council Planning Portal shows the history.

After Greenwich Council sent letters to building owners earlier in the year requesting improvements, only around 25% have so far responded. 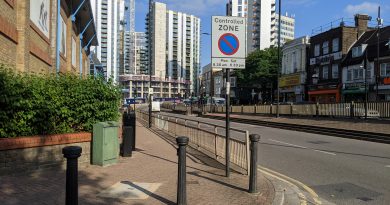