The so called ‘Vista’ building is Woolwich is probably top of my list of awful buildings in Woolwich. The massive, slab like structure looms over Calderwood Street, opposite a row of pretty attractive Victorian buildings. Yet unfortunately a poor quality bodge job 6 years ago converted it from drab offices into flats, rather than doing the necessary and knocking it down.

This oversized block now looks like being extended with a new wing being added next to Sainsbury’s in a similar ‘style’. The plans aren’t that revealing but seem to show it being pretty poor stuff. Details here and here

There’s a nice aerial picture of Woolwich at the welovewoowich site (great selection of pics there) taken around the 1960s. It shows the buildings opposite the library and magistrates court consisting of what appears to be a two storey row of housing. That must have gone in the 1970s to be replaced by the office block and Sainsbury’s. What is now labelled ‘the vista’ was the Morgan Grampian office bloc that replaced that terrace.

When Morgan Grampian moved out so to did the sight of the chief execs big Jaguar (I always remember that – it was rare to see such a motor in Woolwich and it always did appear incongrous in a town on its knees) In some ways the last sign of Woolwich’s former past seemed to go. It seemed symbolic really. A place where big companies were based and actually operated had gone.

The site needed something to be done. Attracting big companies to Woolwich must have seemed like a long shot to occupy all those floors. However, not refurbishing or rebuilding the big grey and drab monolith 10 years ago when the opportunity was there, was a big mistake. It’s such a blot of the area, blocking sunlight, and bearing down on all around.

Normally I would advocate conversions of buildings as it’s better for the environment, but this has almost no redeeming features and ideally would have seen the wrecking ball. However, instead of demolition, it was converted to flats such was the crazy housing boom. The conversion consisted of almost no exterior alterations except a few railings across windows and cheap balconies, and sticking oversized grey sheds on the roof. That only added to it’s bulk. Truly horrific. Cheap and nasty in every sense. Why the council didn’t push for something more is beyond me. I suppose it’s a combination of a council that is far from the the most demanding when it comes to new buildings, and a lack of decent local media to highlight any proposals, and thus they slip through unnoticed until they’re finished and many people then discover the awful result.

If rebuilding was not an option due to cost, a complete exterior change would have lessened the overbearing feel of the building on the street below, and alleviated the gloominess of it. A good example of this is an old 1970s office block in Bristol that was converted around 5 years ago. It was stripped back to it’s concrete frame and the exterior stripped of weathered concrete, and glazing installed. 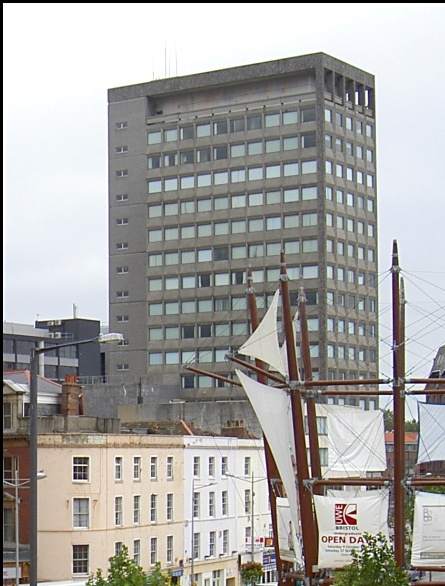 If only something similar was pushed by the Council in Woolwich.

New Pub Blocked From Opening In Woolwich Due To 'Saturation' Policy

5 thoughts on “The worst building in Woolwich…could get worse”