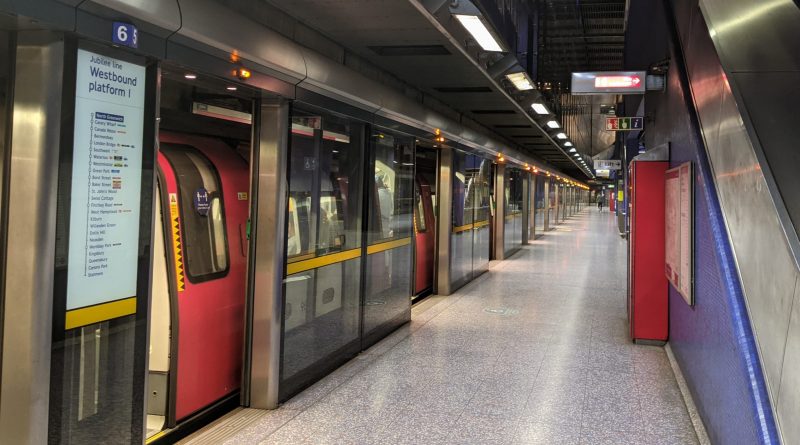 A Transport for London board meeting next week offers an insight into a wide number of projects as a deadline to agree funding comes ever closer.

It doesn’t contain a huge deal that is new, but some snippets of useful information can be seen throughout.

If we start with the tube, a planned upgrade for the Jubilee Line is on hold.

“On 11 November, we successfully completed dynamic testing on the Jubilee line rolling stock modifications to enable an increase in entry and exit speeds at Neasden depot.

The Jubilee line enhanced signalling and fleet improvements, to enable a peak service of 32 trains per hour, remains paused, and restarting this work is dependent on the outcome of current funding negotiations.“

This project was enacted after plans to purchase additional trains was cancelled in 2017.

New rolling stock for the DLR is however being built.

The report states “the initial run of 20 car bodies for trains one to four now in production.

The first train is assembled and ready to start static testing. This strategic milestone was achieved two months ahead of schedule.

“Meanwhile, signalling software development for the new trains continues to progress to programme, with the first software releases due in March 2022.

We have now finalised terms for the acquisition of land at Beckton adjoining the current depot, to accommodate a further 11 trains to be added to the original order of 43.

Extracts from the report give a hint of how they tend to give slanted impressions and gloss over – or ignore – inconvenient issues.

Once again we see TfL only highlight alleviating traffic heading to the Blackwall Tunnel, and not away from.

“The new twin-bore tunnel, within the extended Ultra Low Emission Zone (ULEZ), will effectively eliminate congestion and improve air quality around the Blackwall Tunnel approach, with no increase in carbon emissions.”

This is a crucial omission, as each afternoon long queues form as traffic heading away from the tunnel towards Kent along the A102 and A2 in Greenwich borough.

Queues start in Falconwood and stretch back through Eltham, Kidbrooke, Blackheath and to Greenwich. This isn’t “around the Blackwall Tunnel approach” so gets ignored. 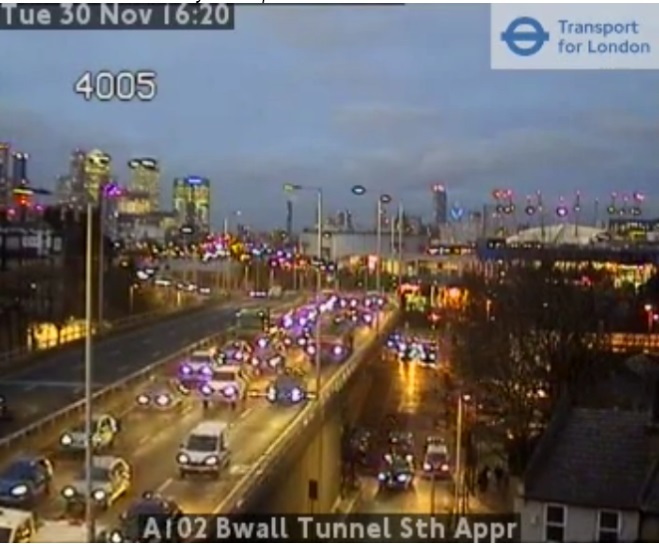 Adding another tunnel’s worth of traffic to the back of it will increase congestion according to TfL themselves, but that’s hidden in specific tunnel reports.

The tunnel needs an upgrade and plans are in place to do so, but funding isn’t there.

“Design work and preparation of tender documents for the design and build procurement stages of the project is now complete.

A review of the project has determined that it is not possible to commit to the detailed design and build stages at this point, as a result of funding challenges.

A series of short-term capital interventions will be put in place to ensure the tunnel remains safe and operable until the main project can be progressed.

The design of an over height barrier to improve compliance of vehicles using the tunnel is currently in under way, with installation set to take place in late January 2022.”

TfL have a program of housebuilding around stations. This has two benefits:

One major site is Limmo Peninsula near Canning Town with 1,500 homes proposed. The report does state something I’d not seen before:

“In agreement with Grainger plc, we have decided to lead on the site at Limmo Peninsula separately as TfL. This will allow us to unlock constraints and shape the opportunity ourselves, similar to the scheme at Bollo Lane which was given the go ahead earlier this year.

We remain open to working with Connected Living London on this in the future should the opportunity arise.”

At Woolwich, the report doesn’t really state anything new.

The DLR site remains in a void after 12 years of inaction and they state plans for towers over the eastern end of the Crossrail station will be submitted by the end of this year.

“Work has now started on the first phase of construction and the first homes went on sale to Londoners this September.

This gives Londoners an opportunity to purchase new and affordable homes prior to wider market sale later in 2022″.

As ever this just seems a bit of PR niceties. If prices are too high for many local people, it matters not whether they have first pickings.

TfL had drawn up plans for 50,000 homes but without Government support can only build 10,000 in partnership with commercial companies. The Treasury is not supporting plans for grant funding – even though in the long term resulting income would assist TfL finances.

The report mentions that certain 24 hour bus lanes expire in March 2022, and a decision is due on whether to continue that program:

“In September 2020, the programme also changed the hours of 85km of bus lanes on our road network to operate at all times.

This experimental scheme is now under review to look at the impact and help determine whether to make these changes permanent ahead of the traffic order expiring in March 2022.”

“Construction works along Evelyn Street are progressing well and are now 45 per cent complete. The works are due to be completed in summer 2022.

“The Creek Road Bridge works section of the route, which will be carried out by the Royal Borough of Greenwich, is planned to start in January 2022.”

“The month of October saw the highest number of October hires in the scheme’s 11-year history, with 1,110,040 hires during the month, smashing the previous best by more than 130,000 hires.”

“Options are being explored to expand the geographical footprint of Santander Cycles, with a business case in development to confirm the priority list of areas that would benefits from expansion.

Third-party funding has been received from the London Borough of Southwark for an expansion within the borough and design work is under way for potential sites identified”.

I’ve previously covered how Southwark are using Section 106 income to expand the network.

TfL state that since 2017, compliant vehicles have risen from 37 per cent to 87 per cent.

Since this report was written it appears that has increased, with 93 per cent mentioned recently.

£61 million has been spent on a scrappage scheme.

TfL state “The number of bus journeys taking place in the Capital is now regularly reaching 75 per cent of pre-pandemic levels”.

Tube growth has lagged somewhat, though weekends are higher. 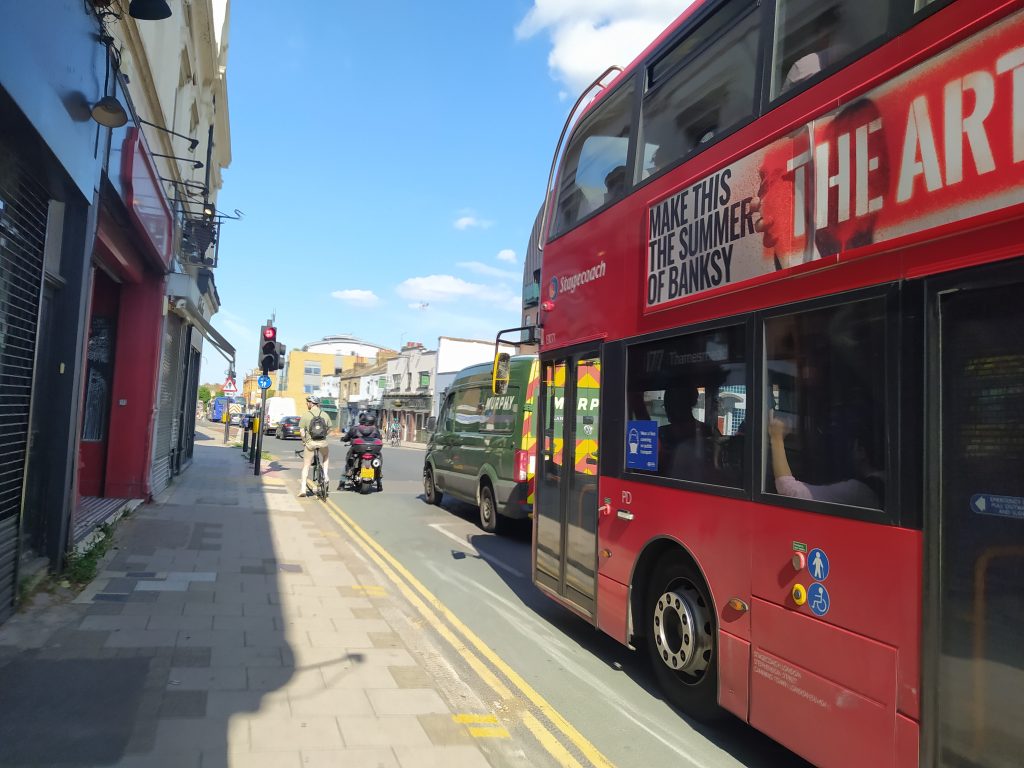 “Tube demand continues to grow and is now regularly at more than 60 per cent of pre-pandemic levels on weekdays, but has reached as high as 80 per cent at weekends”.

This report does not mention the DLR, though it’s return is closer to bus numbers than the tube.

Finances are still in deep trouble due to declining passenger numbers and there’s not long to agree a new finance deal with Government.

“Up to 13 November, TfL’s day-to-day operating deficit “including capital renewals and financing costs – before Government funding, is a deficit of £1,419m, which is £78m better than Budget”.

“We had budgeted for a decline in journeys from the start of November, based on a potential outbreak of COVID-19 in the winter and the Government’s response.

We are not yet seeing any significant impacts across the network, but the outlook remains uncertain.”

This is a problem, as passenger income is some way below expectations.

“Under the funding agreement of 1 June 2021, we receive a top up on passenger revenue to a predetermined level. Government funding support is £1,496m in the year to date, which includes £1,309m of base funding and £187m of net revenue top-up.”

“Total spend on capital renewals and new capital investment for the year to date is £753m, £158m (17 per cent) lower than Budget, partly driven by the short-term and stop-start nature of the funding agreements and this preventing us from being able to plan sufficiently far ahead to get projects approved and agreed with our contractors.”

So then, no pressure for the next finance agreement with government.

Whatever happens, government failing to start talking until the last minute ensures instability will continue and great uncertainty remains with many projects.

The report contains plenty more and can be seen here.